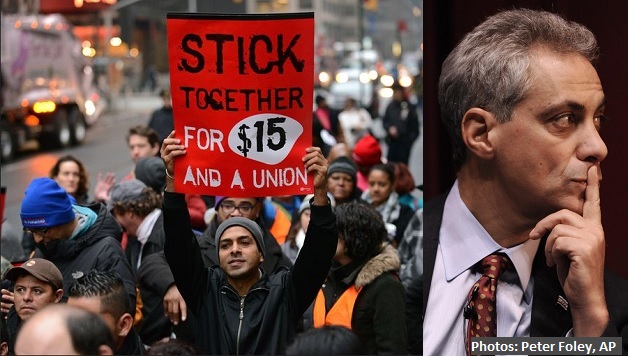 In a closed door session July 7th, Chicago Mayor Rahm Emanuel’s Minimum Wage Working Group voted 13-3 in support of a proposal to raise Chicago’s minimum wage to $13/hour, phased in over the next four years. For tipped workers, the minimum wage would increase $1 over the next two years to a measly $5.95/hour! In spite of its limitations, if passed, the law would be a historic step forward for an estimated 410,000 low-wage workers in Chicago.

But nothing has been set in stone, and the mayor has clearly stated that he intends to wait until after the November midterm elections to take any action. Big business will use this time to water down the already limited proposal. It also gives low-wage workers and activists in Chicago precious time to organize to challenge big business and win the best possible deal.

Chicago has a well-organized and powerful movement of low-wage workers who have even gone on strike and participated in civil disobedience to advance their cause. Some of these workers have criticized the mayor’s proposal, calling it a “slap in the face,” and reiterating their bold demand for $15/hour and a union. These workers, supported by community groups and unions, represent a key force capable of challenging the mayor.

Chicago already supports $15/hour. A non-binding referendum for $15/hour minimum wage passed overwhelmingly earlier this year, and 21 of 50 Aldermen have cosponsored a bill to raise Chicago’s minimum wage to $15/hour. The mayor’s proposal for $13 reflects a shrewd political calculation, intended to cut across the momentum behind $15, while at the same time ensuring the profits and good relations of big-business. The fact that “Mayor 1%” is even talking about $13/hour is a testament to the powerful movement low-wage workers have already built.

But if Rahm Emanuel is serious that no worker in Chicago should live in poverty, like he claims in the press, $13/hour by 2018 is a far-cry from that goal. In urban centers like Chicago, a rising cost of living has made it all but impossible for a low-wage worker to survive, never mind raise a family. For example, a worker would need to earn $15.88/hour to be able to rent an average one-bedroom apartment in Chicago (Washington Post). A living wage for a single parent with one child, who constitute 29% of low-wage workers (MSNBC), is $20.86/hour (MIT). This is why low-wage workers and advocates say that $15/hour is the bare-minimum, a starting point.

The recent historic victory in Seattle, which became the first big city to win the $15 minimum wage, has crucial national lessons. First and foremost is that countering the pressure of big business is not possible without an independent movement prepared to publicly expose and challenge the Democratic Party leadership and their ties to big business. The election of Socialist Alternative Councilmember Kshama Sawant and the building of 15 Now, an independent, working class, bottom-up movement were critical to creating the necessary pressure on the establishment in Seattle. 15 Now campaigned for an immediate $15 for big business and aggressively exposed the lies and profit-driven interests behind corporate scare tactics.

Big business has used its influence to water down the demands of low-wage workers. Building a winning movement means popularizing clear demands. Corporations like Walmart and McDonalds don’t need four years to pay $13/hour. Since there is no sympathy for big business, large corporations hide behind small businesses to mobilize public sentiment against raising the minimum wage. In Seattle, the CEO of Starbucks said that his corporation could pay $15/hour, but that he opposed $15/hour because it might hurt small businesses – as if Starbucks has ever been worried about small coffee shops!

The movement needs to reach out to genuine small businesses who are also being crushed by big corporations and, where necessary, offer policies like subsidies or tax breaks paid for by the rich that ensure their workers get a living wage without forcing mom-and-pop shops out of business. It will also be necessary for the movement to popularize demands against training wages, tip credits, or other forms of so-called “total compensation,” which amount to wage theft.

Part of the mayor’s proposal is to redefine the word “wage” by allowing an employer to count tips towards the minimum wage. Tip credits disproportionately affect women, who make up a majority of servers who rely on tips for a living, thereby institutionalizing the gender-pay gap in our society. In addition, women in the service industry regularly experience sexual harassment, but can feel afraid to confront inappropriate customers because it might affect their livelihood.

Mobilize Against the Corporate Agenda

In Seattle, Kshama Sawant played a key role by offering an independent political voice for working class people in city hall. Seattle’s mayor Ed Murray set up an Income Inequality Advisory Committee similar to Emanuel ‘s “Working Group” to come up with a proposal to raise the minimum wage. As in Chicago it included politicians, labor leaders, and representatives of big business. Sawant used her position to expose the behind the scenes deal-making between politicians and big business, and used her profile as an elected official to build 15 Now “neighborhood action groups” throughout Seattle, so that workers could organize and pressure the mayor’s committee.

In Chicago, 21 Aldermen have already co-sponsored a bill for $15/hour, five votes shy of a majority. They could pass $15 without the mayor by mobilizing grassroots support, which would provide a powerful pole of attraction for low-wage workers who are struggling for a living wage.

But as long as the process is left up to the Democrats in closed-door meetings with big business, workers will be at a disadvantage. To combat big business influence, we need to take this fight into the streets, the union halls, and our communities. In Seattle, some labor leaders preferred close-door negotiations to actual mobilization, and the result was numerous big-business concessions in the final legislation. The 2012 Chicago Teachers’ Union strike offers a glimpse of what’s possible when unions seriously mobilize communities against a corporate agenda. Unions can play a similar role in this struggle, mobilizing low-wage workers for mass demonstrations outside city hall around clear, specific demands to show “Mayor 1%” and the rest of the political establishment that Chicago supports a $15/hour minimum wage.

Ultimately, even winning $15/hour would not address the systemic inequality millions experience under capitalism. The fight for $15 offers the potential to organize the mass of low-wage workers along class lines into a powerful movement to fight for their own interests. Working people have tremendous power when we struggle together in our numbered millions. We are the only force with the social power capable of directly confronting big business and their political allies. Socialists see the movement against income inequality as a powerful lever to begin rebuilding the labor movement and laying the basis for a new political force based on the interests of the millions not the millionaires. If you agree with us, get involved in building 15 Now in Chicago and join Socialist Alternative.