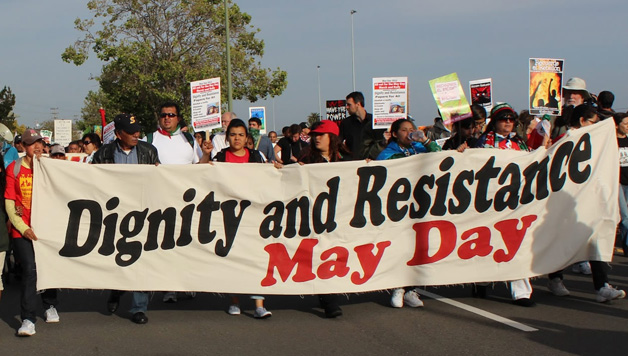 Workers have always had to fight for everything we have, from the weekend to the eight-hour day to less dangerous working conditions. Not to mention every wage increase we have received.

Every year on May 1, workers in many countries get the day off and unions organize large demonstrations and celebrations for International Workers Day. May 1 commemorates events that occurred during the struggle for the eight-hour day in the U.S. in 1886. At that time, workers across the United States were commonly working 10-16 hours a day, six days a week. A general strike was organized across many parts of the country on May 1. Much like the demand for a $15/hr minimum wage today, many businesses claimed a 40-hour workweek was unreasonable and would be too expensive for them. The strike went on for several days. A number of workers were shot by police and the National Guard in cities like Chicago and Milwaukee. Then, on May 4, a bomb exploded during a rally at Haymarket Square in Chicago. Labor activists were blamed, with seven of them sentenced to death. Nevertheless, the strike was a victory, with many workers getting their workdays shortened to eight or 10 hours a day without loss of pay.

The demand for an eight-hour day helped to mobilize fighting unions, radicalizing youth and activists in political parties organizing against capitalist domination. The fight for a $15 an hour minimum wage can do the same today, bringing together labor activists, former Occupiers, and campaigners against racism and sexism. After the momentum of a victory for the eight-hour day, many felt the need to commemorate the struggle and take the movement forward. In 1889, the “Second International” of working-class organizations endorsed May 1 as a worldwide day of demonstrations.

To this day, International Workers Day is a legal holiday in more than 80 countries and unofficially celebrated in many more, where workers mark the day by going to mass demonstrations.

With 400 Americans owning more wealth than half of all Americans combined now, more than ever, working people in the United States need to reclaim May 1 and its original spirit of struggle. In recent years, the tradition has been reclaimed in the U.S. by the immigrant rights movement. Then, Occupy groups in 2012 also helped organize big rallies. This year, the fight for a $15 an hour minimum wage will be a key demand of many demonstrations. The concessions made to workers in 1886 were not given easily. It took the organized struggle of tens of thousands of workers, risking their lives, breaking laws in a coordinated manner, and defying police and the National Guard to win these improvements.

The very fact that workers were able to shut down large sections of the economy to win improvements in their standard of living shows the potential power of the organized working class. Despite the decreasing union density in the U.S., the potential for this power remains fundamentally the same. The power to organize to bring the economy to its knees is the power that changed manufacturing jobs from the low-skill, low-wage, unorganized jobs they were to being considered “good union jobs” now. We need to fight to make the same transformation in the low-wage service sector jobs of today.

However, every victory won under capitalism is only temporary in nature. As soon as the workers and our unions appear weaker, the bosses will try and claw back previously won gains. The profit motive as the driving factor in the economy dictates that bosses will always try to decrease the workers’ share of the profits in order to increase their own.

Workers do all the work in this society. We can run the economy and society democratically ourselves by taking the top 500 corporations into public ownership. A society run on this basis rather than the profit motive could immediately give everyone a socially necessary job, eliminate unnecessary branches of the economy and, instead, make a massive investment in infrastructure, improving and expanding free education for all, including universities; free universal health care with a strong focus on preventive care; and food production in the interests of public health rather than profit. And spreading the socially necessary work out among the entire potential workforce would decrease the number of hours everyone would have to work. No one who works would have to live in poverty, as the obscene wealth hoarded by the 1% would be made available for all.

Genuine democratic socialism would be a fundamentally different society in which the economy is democratically run through committees in workplaces and neighborhoods, which would elect people to regional and worldwide committees who would be recallable at any time and would not earn any more than the average of the people they represent.

To achieve such a fundamental transformation of society – a key goal of many of the original organizers of International Workers Day – we need to build and strengthen the labor movement and fight to get unions to break from the two parties of big business and enter the political arena with a party of our own.