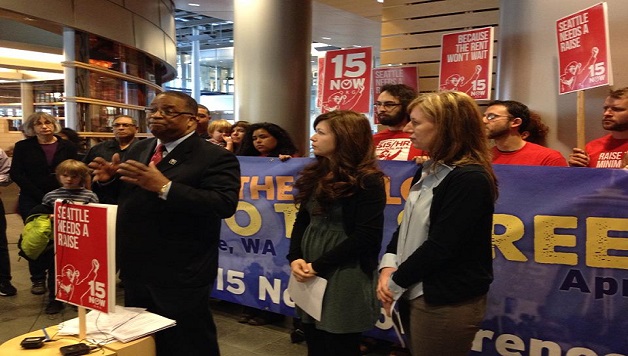 “We have a safety net in case politicians fail to deliver a strong $15,” says Jess Spear for 15 Now. The 15 Now grassroots campaign will decide at its national April 26th conference whether to start collecting signatures from tens of thousands in Seattle to place an initiative on the November ballot. If 15 Now chooses to go ahead with collecting signatures, activists intend to use the signature collection campaign as a massive community organizing and educational opportunity.

Corporations and their lobbyists such as Sustainable Wages are pushing back by demanding that any $15/hour minimum wage include “total compensation,” “tip credits” and a gradual phase-in, not only for small businesses but also huge corporations such as McDonald’s, Burger King, and Safeway.

The ballot initiative gives Seattle voters the option of deciding for themselves in November 2014 whether they want a strong $15/hour minimum wage.

SEATTLE – Sarah White, a nurse practitioner and 15 Now activist filed language for a charter amendment with the City Clerk this morning. “Poverty pay is a public health issue and this amendment addresses that squarely. As a nurse, addressing income inequality by increasing the minimum wage is a no brainer for improving the health of our city,” said White.

Jess Spear, Vote 15 campaign manager said, “Over 100,000 workers in Seattle – one quarter of the workers in this city – stand to be lifted out of poverty by the passage of a $15 an hour minimum wage.”

Spear continued, “The Washington Restaurant Association, Starbucks, McDonalds, Safeway, Hotels and others are getting ready to pour in millions of dollars to undermine a $15 minimum wage. Seattle’s working people need to defend against this invasion of corporate cash. By filing this charter amendment, we have a safety net in case politicians fail to deliver a strong $15 ordinance – we are reserving the right to have the people of Seattle make the decision democratically about what the minimum wage should be.”

King County Councilmember Larry Gossett also spoke at the press conference in support of the charter amendment, citing the $15 minimum wage as a civil rights issue.

Other organizations and individuals who have already endorsed the charter amendment include:

A charter amendment requires approximately 30,000 signatures to be put on the ballot and would become part of the charter of the City of Seattle. The City Charter can only be amended by a popular vote.