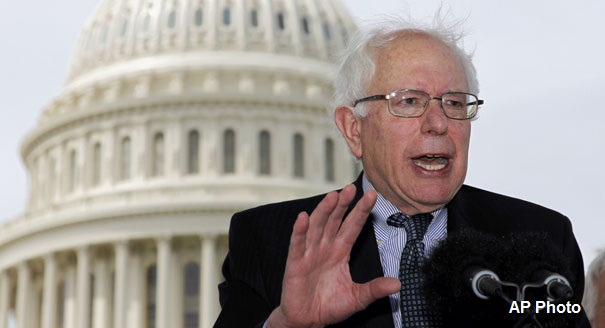 It is becoming increasingly clear that the economic and political situation in the US has created a massive opening for authentic left politics, probably the biggest opening in several decades. After six years of mass unemployment and savage austerity, people are utterly fed up. Occupy changed the political discourse, and now the main issue in US society is the staggering scale of social inequality and what to do about it.

The “House of Representatives”, dominated by right wing Republicans elected in gerrymandered districts, is totally unrepresentative of ordinary people. Meanwhile, the Democrats under Obama have paid lip service to helping those suffering from the effects of capitalism’s crisis. But in practice they bailed out Wall Street and have caved in to the right on issue after issue. Disillusionment with the dysfunctional political system has led a majority of the US population to identify itself as “independent”.

Last fall, nearly 100,000 people in Seattle voted for an openly socialist candidate, Kshama Sawant. In Lorraine County, Ohio, a slate of labor-backed candidates most of whom ran independently of the Democrats, was swept into office. Now, potentially viable left and socialist candidacies are being announced in other cities. And within the Democratic Party itself, there is the emergence of a populist wing including Massachusetts Senator Elizabeth Warren and newly-elected New York City Mayor Bill de Blasio.

This massive political opening on the left is what makes the announcement by independent Vermont Senator Bernie Sanders, in interviews for Time and The Nation that he is seriously considering running for president, so significant. Socialist Alternative welcomes the fact that Sanders is seeking a dialogue with progressive and left activists inside and outside the Democratic Party about whether he should run, and, if so, whether he should run in the Democratic primaries or as independent left candidate. Sanders was first elected as Mayor of Burlington, Vermont in 1981; he then went on to be an eight term member of the House of Representatives before being elected to the Senate in 2006. He has consistently stood up on issues directly affecting the interests of working people. He has been a prominent and consistent advocate of a universal health care system and “single-payer”. He opposed the bailout of the banks in 2008. He has also spoken out strongly on a range of environmental issues.

In raising the possibility of running for president, Bernie correctly states that, “Somebody has got to represent the working-class and the middle-class of this country in standing up to the big-money interests who have so much power over the economic and political life of this country.” He talks about the need for a “political revolution” in the US in order to “empower people to take control over their lives.”

While Bernie Sanders clearly stands out as a genuine progressive and a champion of ordinary people, Socialist Alternative does not agree with him on all issues. For example, he argues that the model for socialist policies is the Nordic countries, Denmark, Finland, Sweden and Norway. The reality is that while these societies had highly evolved welfare states, the social gains made by working people there have been under attack as in all capitalist countries from neo-liberals, often with the support of social democrats.

Also, while Bernie honorably opposed both the Patriot Act and the invasion of Iraq, he has, on numerous occasions, voted for military appropriations. Regrettably, he did not oppose the war in Afghanistan and his position on the use of drone strikes has been ambiguous at best. These and other issues would clearly need to be discussed, through, in laying the basis for a presidential campaign of the left.

But our most pressing difference with Sanders is on the Democratic Party. Bernie Sanders has remained formally independent of the Democrats, but in reality, he has not clearly posed the need for the building of an alternative to the two parties of corporate America. He supported Clinton, John Kerry, and Obama’s presidential campaigns. Now, however, he is raising the central issue of whether progressives in the US should continue to try to “reclaim” the Democrats or try to build a new party.

Why Bernie Should Run as an Independent It will be argued by some that running against the two corporate parties in a presidential campaign is a hopeless, quixotic endeavor. But as Sanders points out in the recent interviews, a serious independent left campaign would not primarily be aiming to win but to build a new political movement and a new political party.

The question Sanders and many others ask is whether this is viable. Our view, again, is that there has not been a more propitious time in modern American history to begin to build a pro-working class political force. Kshama Sawant’s resounding success is a very small indication of what is possible if progressive forces, and especially a section of the labor movement, decided to make a decisive break with the Democrats. We are not, of course, pretending that a mass party of the 99% could be built overnight, but if Sanders decided to run as an independent left candidate for president on the basis of using his campaign to help galvanize the forces to launch such a party, it would be an enormous step forward. Concretely, his presidential run could be linked to a national effort to stand a slate of credible left candidates in local and national races in 2016 on an independent basis.

This is not an easy road, but it is the right road. What is, however, certain, is that running in the Democratic primaries, while it would galvanize many progressives and gain a lot of media attention, would also feed the cruel delusion that the Democratic Party can be “captured” by progressives. There is no possibility that the ruling class of this country will allow one of its parties to be taken over in this way. The overwhelming likelihood is that this effort would end, as many have before it, in the demoralization of another generation of activists. This must not be allowed to happen.

Bernie Sanders has stated that he wants a dialogue with progressive activists before deciding on whether to run for president and on whether he should stand as an independent or within the framework of the Democratic Party. As a first step, we would urge Bernie to organize a genuinely representative national conference of progressive, community, and labor organizations to discuss the way forward in late 2014 or early 2015. This conference could become the focus to galvanize all those who want to build a new authentic working-class politics in America. Such momentum would, we hope, persuade Bernie Sanders to take the historic step of running as an independent left candidate for the presidency in 2016.