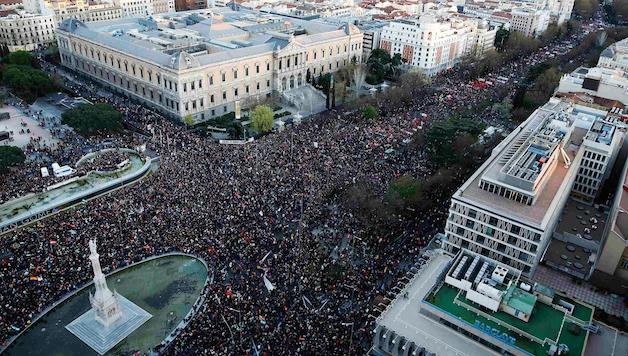 22M: A before and after moment for the class struggle “De Norte a Sur, de Este a Oeste, la lucha sigue, cueste lo que cueste” (From North to South, East to West, the struggle continues no matter what the cost)

The above chant rang through the streets of Madrid as a deafening roar last Saturday. On 22 March, Madrid was shut down by an unprecedented human sea in the “marches for dignity”. The marches were a stunning success, a crucial turning point in the situation, and mark the opening of a new phase in the struggle against the government and policies of the Troika. Estimations of the attendance on the marches range from 1 to 2 million, in what was possibly the biggest single demonstration in Spain since the fall of the Franco dictatorship. Thousands arrived in Madrid from all corners of the country, in six columns, many of whom had set out from their home towns on foot, up to a month prior to 22M. The masses flooded the city, under the banner of “bread, jobs and housing for all” – “no payment of the debt, out with the governments of the Troika”. A result of the heroic and patient work of thousands of activists over weeks and months, 22M has shown what the working class id capable of achieving when consciously organised. The response of working people to this mobilisation – which was built without the support of the main trade union leaders – was spectacular, and shows, contrary to the cynics, how the working class responds to a clear call to struggle for its rights when a fighting lead is given. The power of this mobilisation, the manner in which it was built, and the class and political character of its demands mean that things will not be the same again in its aftermath.

In the context of the crippling economic crisis and mass misery, and of the criminal failure of the leaders of the workers’ movement to mobilise the necessary fightback, 22M represents the working class entering the stage to break the logjam and open up a new phase of struggle.

Almost 3 years following the explosion of the ‘15M’ indignados’ movement, 22M also manifested how far the consciousness and outlook has moved on throughout the movement. The mass mobilisations of 3 years ago featured a strong anti-party mood, a “neither left nor right” consciousness, and an absence of clear working class consciousness. The masses on the march on Saturday were crystal clear that their movement was of a working class character, that its ideas were of the left, and overwhelmingly, that political organisations are necessary in the struggle against the Troika (as evidenced by the sea of red flags, of the United Left in particular which decorated the crowds).

Today’s movement retains the fresh, democratic spirit of the indignados’ movement. However, as we then explained, that movement was also characterised by weaknesses: the lack of solid organisation and coordination, the absence of the organised workers’ movement, and the lack of a clear political programme. 22M reflects how these obstacles are being overcome.

This chant refers to the victorious battle of Gamonal, a working class neighbourhood in the northern city of Burgos, against the government and big business in January 2014. A movement of daily mass blockades, organised through democratic assemblies defeated the government and developers’ plans to ‘redevelop’ the area. This victory had a huge impact throughout the country, popularising militant methods and people power. On 22M, not only this struggle, but all of the key workers’ and social struggles of the last period were revered and celebrated. These include the victorious indefinite strike of Madrid street cleaners, the longest indefinite strike since the transition underway in PANRICO Barcelona, the Coca Cola workers’ strike, the ‘tides’ (mass movements against education cuts and health cuts and privatisation etc. These struggles, which have taken on a constantly more militant form, have been crying out for a united generalised expression on a state-wide level. The unification of these struggles remains a burning necessity of the moment, and 22M represented a step in this direction.

This slogan was also among the most widely chanted on the demonstration. However, only 48 hours before the march, the leaders of the main trade unions (UGT and CC.OO) manifested dramatically their capitulation before the system, appearing in an infamous photo alongside Rajoy and buisness leaders, to discuss a “new and deeper phase of social dialogue”. This showed before everyone the gulf that separates the union tops from the mood on the streets.

However, there is no doubt that the streets of Madrid were flooded with rank and file members of these very trade unions on Saturday who worked tirelessly to build and prepare the marches. There is also no doubt that if these same trade unionists now struggle within their unions for a break with the social partnership, the leaders will be forced to reconsider continuing with their shameful defeatist, demobilising approach.

The success of 22M was achieved despite, not thanks to, the lack of support by the UGT and CC.OO apparatus. The fact that it was so massive despite this fact is very significant, showing the willingness and ability of the working class to find the path to struggle around whatever obstacle. But at the same time, escalating the movement towards strike action as will be necessary will be more difficult if workers to do not success in turning the tide of the union movement. 22M must be the spark that ignites a coordinated struggle to build a left and rank and file opposition to the the pactism of the main leaders, extended throughout the entire union movement.

This chant, repeated innumerable times during the march, represents the road forward in order to ensure the necesary continuation of the movement. The question of a general strike has been firmly placed back on the table after a criminal year and a half since the last one. However, following the mass exmplosion from below of 22M, a new general strike cannot be as those which have gone before, organised by the union leaders to let off steam and followed by demobilisation and defeat. We need a general strike which can take the struggle to the next level, beyond the debates in the “institutions”.

We need a new general strike, built for from below with a political programme based on the demands of Saturday’s marches, a political general strike. This would be the first step in a sustained and escalating plan of action which can only end in the fall of the Rajoy government and a break with the capitalist regime designed following the transition in 1978.

It is therefore necessary that the assemblies and coordinating bodies established in the organisation of 22M are maintained, and extended into workplaces, neighbourhoods and educational institutions in order to discuss and democratically plan such a struggle. Thee assemblies can form the basis for the united front between the left, social movements and workers’ organisations which the situation demands.

Finally, we must stress the impact of Izquierda Unida on the march, which was covered with a sea of its flags and filled with its activists and supporters, along with other groups and organisations. However, if IU is to become the political force which can give the movement a voice and lead it to victory, it is crucial that it adopts a clear political programme for the socialist transformation of society, to break with the Troika and capitalism. Only a workers’ government armed with socalist policies can satisfy the demands of 22M, as part of the struggle for international socialism.