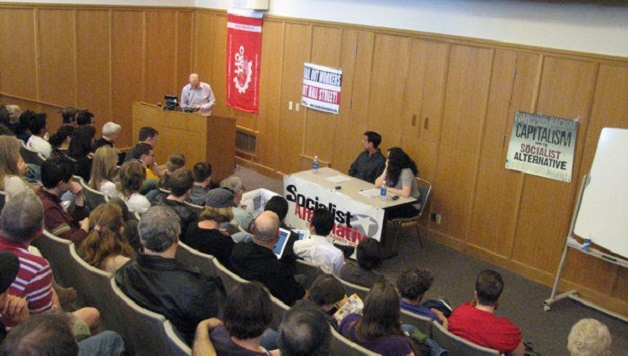 The Northwest Socialism Conference, held Saturday, May 8th at Seattle University, marked a big step forward for socialists in Washington State. More than a 140 people from all over Western Washington came to discuss socialism and the conference’s theme ”Revolutionary Ideas for Changing the World.”

Clay Showalter, a student at Evergreen State College in Olympia, expressed the sentiment of many who came to the event. “I have never seen so many people cheering and applauding socialist ideas. It was inspiring to see that many people discussing socialist politics.”

The number of participants mushroomed over the course of three sessions throughout the day. An initial crowd of 75 grew to approximately 140 for the last session featuring a debate with a Tea Party member, forcing the conference to move to a larger room.

A big highlight of the conference was the second session titled ”Where is the Change Obama Promised? Resisting War and Cuts in Jobs and Education.” This discussion featured prominent anti-war activist Cindy Sheehan, who became a key leader of the antiwar movement following her famous protests outside George Bush’s ranch in Texas in 2005. She had set up a camp out outside his ranch waiting simply to ask him why he had sent her son Casey to die in Iraq.

Cindy gave an inspiring, engaging talk explaining how she had come to the conclusion that capitalism is the root cause of the wars and the economic crisis we face. ”I came to this conference because this is a conference with people who are connecting the dots  connecting the war to the social and economic issues.”

A big part of this discussion dealt with the role of the two-headed ”war party,” as Cindy termed the big-business Democratic and Republican parties that dominate the U.S. political system. She called George Bush “the boil on the ass of democracy,” but explained, “When you have a boil, it means something systemic is wrong. You can’t just cut the boil off. It will inevitably grow back again unless you address the underlying problem in the system.”

Cindy spoke about how Democratic Party leaders promised her that if she helped get them elected, they would end the war. However, after they took control of Congress in the 2006 elections, they failed to follow through on their promises and she drew the correct conclusion that the Democrats were not a voice for ordinary people who want real change. In 2008 she decided to run an independent, anti-war campaign for Congress against Democratic Party House leader Nancy Pelosi, coming in second place and winning an impressive 17% of the vote.

Cindy pointed out how Obama is not the ’Peace President’ at all. In fact, he has escalated the war in Afghanistan and increased drone attacks inside Pakistan. She made the case that Obama’s policies on the wars were fundamentally the same as Bush’s. “The only difference is that Obama can pronounce the word ’nuclear.'”

The discussion also featured Richard Curtis, who is running for U.S. Senate in Washington on an independent left-wing platform, as well as Philip Locker, a national organizer for Socialist Alternative. Philip explained how the working-class anger developing as a result of the crisis of U.S. capitalism has led to a growth in support for socialist ideas, as shown by multiple opinion polls, although he pointed out that a lot of confusion remains about what socialism is exactly. ”We have an opportunity to rebuild support for genuine democratic socialist ideas. It’s time for socialists to come out of the closet.”

Another session, titled “Capitalism in Crisis and the Case for Socialism,” featured Matt Gonzalez, the vice presidential running mate of Ralph Nader in 2008 who nearly became the first Green Party Mayor of a major U.S. city in 2003 in San Francisco.

Matt argued that the many injustices in society made it “easy to critique capitalism” and talked about the need to push for far-reaching reforms in society. This sparked a debate that eventually helped clarify the need to fight for reforms here and now while also aiming ultimately to overhaul the entire political-economic system.

Patrick Ayers, a former Teamster union activist and a regular contributor to Justice newspaper, also spoke explaining how socialism is not just a nice idea about some rosy distant future. A socialist program, he argued, can provide an important backbone to grassroots struggles today as they come up against the logic and constraints of capitalism. ”What’s the point of struggle, of participating in fighting for real change, if we don’t have a clear vision of a better future?”

The discussion and exchange of ideas between the speakers and participants of the two sessions really underscored the enormous changes in people’s consciousness that, under the impact of the crisis in capitalist society, have put socialist ideas back on the agenda in the U.S. All the participants (with the exception of Tea Party supporters who came for the debate) generally agreed with the need to create a truly democratic, equal society. The socialist critique of the Democratic Party also fell on receptive ears among people who were angered by the Democrats’ failure to accomplish any real change with their control over the White House and Congress.

Another highlight of the day for a lot of people was the debate between Tea Party blogger Keli Carender and Socialist Alternative organizer Ramy Khalil. The Tea Party movement, supported by Fox News and other corporate backers, has gotten an echo for their ideas amongst a significant minority of Americans particularly because of their opposition to the bailout of Wall Street. For this reason, Socialist Alternative members felt the Tea Party cannot simply be ignored or dismissed, and they proposed the debate to challenge their arguments in a public forum.

Keli made the case that capitalism is ”the only moral system” for the protection of individual rights and argued that “big government” was the main problem in society. But Ramy explained that the ideology of the Tea Party is disconnected from the reality of how capitalism actually works. He agreed with the Tea Party that our current government is terrible, but he argued that this is because the government is a tool of the corporate elite under capitalism who always seek to increase their profits at the expense of workers and the environment. The oil spill in the Gulf of Mexico, the mine explosion in West Virginia, and the new anti-immigrant law in Arizona were only the latest examples.

In his concluding remarks Ramy asked whose interest the ideas of Tea Party really help in the end. He pointed out how Republican Presidents Reagan and George W. Bush used similar arguments against big government, but they still wracked up huge government deficits by handing out tax cuts to the super-rich and massively expanding the military, wrecking the lives of millions of ordinary people in the U.S. and around the world.

Overall, the conference was a major success reflected in the more than $1800 collected in donations! Dozens of people who were new to socialism signed up to get more information about Socialist Alternative. Former King County ACORN Head Organizer and Nader campaign activist Alex King summed up the mood. ”This event was exciting and re-energizing. A lot of activist meetings can be monotonous and narrow in thought, but this event was very inspiring. The debate was brilliant, and I look forward to coming to as many more Socialist Alternative events and meetings as I can.”

Here is an excerpt of a debate between Keli Carender from the Tea Party and Ramy Khalil from Socialist Alternative that took place at the Northwest Socialism Conference on May 8, 2010 in Seattle.

A full 2-hour video of the debate was filmed by ©Alexander R. King www.arkphotos.com

Keli Carender is a rising star in the Tea Party movement. She was leading Tea Party rallies in Seattle in early 2009 before the national Tea Party movement even existed. She has been featured in The New York Times and on National Public Radio. She recently won the $3,000 Town Hall Award from a conservative association for challenging Democratic Congressman Norm Dicks on health care at a town hall meeting. Well known as “Liberty Belle,” she blogs at www.redistributingknowledge.blogspot.com.

Ramy Khalil is a regular contributor to Justice, the newspaper of Socialist Alternative. He has been an active member of the Amalgamated Transit Union Local 587 and a leading organizer of mass protests against war and budget cuts to education and public services. He is currently pursuing a master’s degree in U.S. and world history, and his articles appear at SocialistAlternative.org.

For more info or to get involved, contact us at Seattle@SocialistAlternative.org or 206-631-9480

Seattle University newspaper reported on the conference, but it is no longer available online. Previously available at: http://www.su-spectator.com/news/socialists-host-tea-party-on-campus-1.1481346