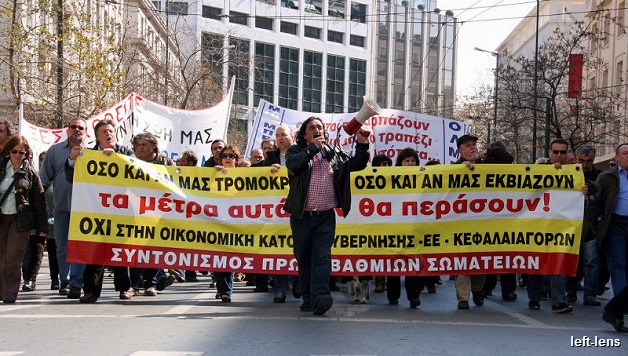 Yesterday, workers across Greece took part in a huge general strike in angry opposition to a new “austerity cuts package.” The strike hit all public and private sectors and closed down airports, docks and stopped all public transport. In Athens over 200,000, possibly 300,000, marched in the biggest ever trade union protest.

The planned vicious cuts, estimated at 30 billion euros, which includes wage freezes and cuts, pension cuts and VAT hikes, will be carried out by the “socialist” PASOK, government in return for a huge 110 billion euro bailout from the EU, IMF and European Central Bank to try to deal with Greece’s huge national debt.

During huge demonstrations in Athens yesterday, a branch of the Marfin bank in central Athens was firebombed, killing three bank workers. Socialists everywhere will condemn these deaths of innocent workers – forced by their bosses to work during yesterday’s strike. Supporters of Xekinima (the CWI in Greece) tried to help the trapped bank workers and have appeared on Greek television explaining that demonstrators attempted to save the workers’ lives.

Below, we publish a slightly edited version of a press statement issued today by Xekinima, which comments on the bank workers’ tragic deaths, the magnificent strike action and also on the next steps that need to be taken by the Greek workers’ movement.

Yesterday’s magnificent mobilization in Athens and others cities of Greece was unprecedented. Athens “sunk” (as the demonstrators commented to one another) under the weight of hundreds of thousands of protesters. This was the biggest trade union mobilization since the fall of the military junta in 1974. The general strike and mass demonstration was taken to send a message of the most determined resistance against the cuts package measures agreed by the Greek government, IMF and the EU.

More and more workers understand that these measures have nothing to do with the “interest of the Greek people” as the government claims and that they are instead aimed at forcing Greek workers to pay the debts of the government to the Greek and foreign bankers. These debts were created by a conscious policy of continuous transfers from the state budget (through tax relieves and other means) to the capitalists to maximize their profits and to help the Greek bosses exploit cheap labour in the Balkans over the last two decades!

Yesterday’s magnificent response of the working class must represent the beginning of new great struggles. The overturning of the plans of the government, the IMF and the EU is possible!

Unfortunately, however, yesterday’s historic day has been blackened by the tragic death of the three workers in Marfin bank.

We express our huge sorrow and, at the same time, immense anger, over the death of the three bank workers.

Of course, overall responsibility for an upsurge in street conflict lies, to start with, with the “socialist” PASOK government because the policies that it applies lead society into complete instability and, as a result, violence is entirely inevitable. Responsibility equally lies with the owners of the MARFIN bank who, as is becoming clear, forced their workers to work on the day of a general strike, under conditions of great danger as the bank was on the way of the demonstration and clashes with the police were expected. At the same time, it seems that there was not proper fire safety or any emergency exits in the bank building.

These facts, however, do not acquit the supposedly “anti-statists” anarchist groups from their criminal responsibilities. We condemn, in the most decisive manner, the criminal irresponsibility of the so-called “anti-statists”, anarchist groups. This event would have happened sooner or later – they would have caused the loss of workers’ lives due to their immeasurable irresponsibility. It is not the first time that these groups have thrown petrol bombs into areas where there are workers who have had to run for their lives! Some of these groups explain their activities by reference to anarchist ideology. Some others are simply secret police agents who consciously act as provocateurs – this has been proven by plenty of photographic evidence (but this does not seem to cause any rethinking of their actions in the minds of these anarchist groups!).

Service to the capitalist state

The actions of these groups provide the best service to the capitalist state, which they claim they want to destroy! The state exploit the actions of these groups, which provoke disgust and anger from the working class, to justify state repression. The methods of these highly irresponsible groups diverts the attention of the working class movement from how to intensify class struggle to mainly discussing their criminal activities! Finally, these groups are characterised by immense arrogance; they speak in the name of “revolution,” thus confusing immense convulsions of society and the masses with their individual personal mad “rebellions.”

Therefore the first task to which the organised workers’ movement and particularly the mass parties of the Left should respond to, is the defence of the rallies and mass actions of the working class, by all means, from these “anti-state” groups. The KKE (communist party), SYRIZA (left coalition) and the far left groups have a responsibility to organize united rallies including common stewarding and protection.

But yesterday’s actions by the parties of the Left – organising separate marches – is absolute irresponsibility in relation to the interests of the workers’ movement.

The central question at this moment for the working class is: How should the struggle develop?

Greek workers and pensioners know that the measures of the government means a reduction in the living standards of the huge majority of people, by 20% to 30%. There is no doubt that workers are willing to fight against these measures. It is worth losing 5, 10, 15 days’ wage to counter these cutbacks and workers are willing to do it. But a precondition for this is that the leadership of the trade union movement and the parties of the left call for such a decisive course of action.

In our opinion, the proposals that ought to be made by the left parties and the organized working class today are:

For the left to be consistent with its principles and declarations, it has to openly and clearly state that the capitalist system is inhuman and barbaric. And that the only way for the workers to live a better life is to fight for the nationalization of all major companies, under workers’ control and management, as the only way to have real productive investment to end unemployment and poverty and to plan the economy for the needs of society, as a whole.

The struggle for the overthrow of the dictatorship of the market, the ending the barbarity of capitalism, and the struggle for an alternative socialist society, based on workers’ democracy (not the caricature of Stalinism), must become the banner of the left parties. This can inspire the movement of the working class during the turbulent times we have entered in Greece, Europe and globally.