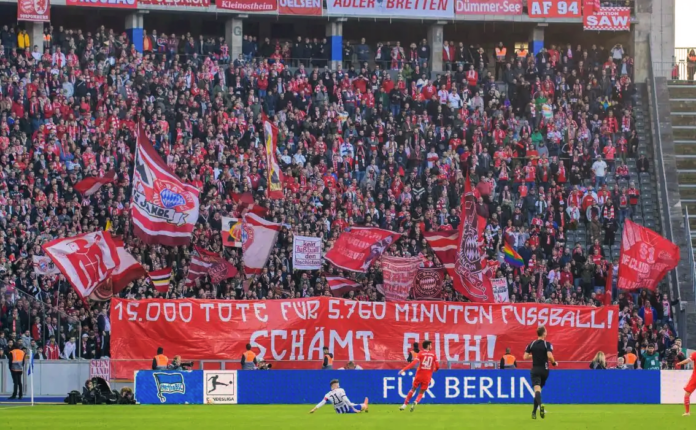 The oligarchs, dictatorships, and dodgy billionaire owners of soccer clubs, through their well-oiled PR machines, say to “keep politics out of sport,” but soccer has never been more political. Grassroots fan movements have sprung up everywhere. Fans are pushing back and organizing against the Qatar World Cup and the ownership of clubs by bloody dictatorships like Saudi Arabia.

The 2022 soccer World Cup kicks off on Sunday, 20 November on the ‘fields of the dead’ in Qatar. More than 6,500 migrant workers from India, Pakistan, Nepal, Bangladesh and Sri Lanka, according to their governments, have died building the infrastructure for the tournament. The real figure is much higher. Since construction on the stadiums started in 2010 until 2019, 15,021 non-Qataris died of all ages, causes and occupations. The statistics from the Qatari government do not specify whether those who died were construction workers, nor are the exact numbers of Kenyan and Philippine workers killed, known.

Qatar is a dictatorship where there is a systematic violation of workers’ human rights and employees are exploited on a daily basis. Workers are forced to sleep on the floor, work in the scorching heat, and are severely underpaid. Due to the Kafala system in Qatar, migrant workers are the ‘property’ of a ‘sponsor,’ which means basic work regulations do not apply to them. Hence, the Kafala system is seen as a form of modern slavery. Although Qatar has announced that the system has been abolished and that working conditions have improved, Amnesty International reported that some of these reforms are being rolled back.

The hashtags #BoycottQatar and #CancelQatar are trending all over the world. In the Netherlands, France and Germany, there are fan campaigns calling for a boycott of the World Cup and banners condemning the exploitation of workers and lack of rights for women and gay people in Qatar have been unfurled at matches. In Germany the strongest demonstrations came from fans of Borussia Dortmund, Bayern Munich, and Hertha BSC. The latter held a banner with the message “15,000 dead for 5,760 minutes of soccer! Shame on you!”

In Brussels, among others, cafés Maison du Peuple and Brasserie de l’Union in Sint-Gillis announced that they will not broadcast the Qatar World Cup in their cafés. Numerous Brussels municipalities are not erecting big screens for the tournament, as they disagree with the ‘unethical conditions’ surrounding the World Cup.

In the UK, LGBT pubs in Leeds and Birmingham have announced they will boycott the tournament and will not be showing the games. Homosexuality is illegal in Qatar, where same-sex relationships can be punishable by the death sentence.

Qatar World Cup ambassador Khalid Salman referred to homosexuality as “damage in the mind” and added that LGBT people attending the tournament should “accept our rules.” This has enraged LGBT soccer fans. Birmingham comedian Joe Lycett issued an ultimatum to Qatar World Cup ambassador David Beckham: he promised to donate £10,000 of his own money to charity, but only if Beckham ended his deal with Qatar. Other ex-players have been put on the spot. Ex-Manchester United player Gary Neville has been called out for agreeing to go to Qatar for the World Cup, despite speaking out against the exploitation of workers previously. Many fans feel he should follow the example of his former teammate, Eric Cantona, who has roundly condemned the event.

In Poland, Red card for Qatar and the World Cup 2022 will protest outside the Qatar Embassy in Warsaw on the day of the opening match of the World Cup. The protest is organized by Alternatywa Socjalistyczna, with other left organizations and sports groups invited.

In May, Amnesty and other rights groups called on FIFA to set aside $440 million to compensate migrant workers in Qatar for human rights abuses. Polls indicate that big majorities of fans of all the countries in the World Cup support this. The soccer associations of England, Germany, France, Netherlands, and the U.S. have also supported the move. The Australian Socceroos issued a video statement in support of workers’, union, and human rights. FIFA President, Gianni Infantino has refused to commit to the compensation plan.

This is no surprise, as there is proven bribery and corruption surrounding the original Qatar bid in 2010. Qatar officials have been charged with buying votes and several FIFA members have been fired because of taking bribes. Most of the FIFA suits who were in the room when the Qatar bid was announced in 2010 have been given and are serving sentences and soccer bans for corruption. Michel Platini who was then President of UEFA, has completed a four-year ban from soccer. Jack Warner was a FIFA exco member and is now banned from soccer for life and is facing extradition from Trinidad to the United States for criminal prosecution. The list is long….. Also in the room when Qatar won the right to hold the World Cup were Vladimir Putin, Boris Johnson, Roman Abramovich, David Cameron and David Beckham, who at the time declared he was ‘disgusted’ by the bidding process, but the £15million a year in a ten — year deal, he receives as soccer ambassador for Qatar has changed his tune.

The Qatar World Cup is a clear and blatant form of “sportswashing.” In the Middle East there is a soccer and sport arms race as various dictatorships scramble for influence. Sheikh Mansour of Abu Dhabi took over Manchester City in 2008 and Qatar Sports Investments, bought a 70% stake in Paris Saint-Germain in 2011. The Saudi state could not allow their regional rivals to get the jump on them, so they bought Newcastle United Football Club (NUFC) on October 7th, 2021. The acquisition of the club is part of the Saudi state’s ‘Vision 2030’ which they officially claim is, ‘diversifying the nation’s economy away from its fossil fuel reserves and opening the nation’s culture to the world.’

The regime has spent $1.5 billion to host numerous sporting events. From s matches such as the Spanish Super Cup to horse races, world-heavyweight title boxing matches, and motorsport, including most recently Formula 1. The kingdom is spending big on securing the rights to host these prestigious events. The jewel in the crown is the ownership of a Premiership soccer club. The ownership enables the dictators to portray a ‘modern, forward looking’ country. They hope, especially if NUFC can win some cups, that people will look away from their crimes and many human rights abuses.

Unlike at Manchester City and PSG, there has been a small but determined group of NUFC fans who have refused to take the takeover of their club as an accomplished fact and simply accept that is the way soccer is today. NUFC Fans Against Sportswashing was set up at the time of the takeover and has held meetings on the Saudi’s war on Yemen which has caused a humanitarian crisis. In a cruel war the Saudi state uses UK-supplied weapons and technology to cause a living hell for Yemeni people. 23.7 million people are in need of assistance, including almost 13 million children. More than 10,200 children have been killed or maimed since the beginning of the conflict, and thousands more have been recruited into the fighting. An estimated 2 million children are internally displaced. There is an on-going famine affecting 17.4 million people as of March 2022.

The campaign set up a fanzine, ‘Hailstones in the Desert’ which was named as a tribute to the brave Saudi activists standing up for human rights inside and outside the country. When the Saudi state took over NUFC, politicians, mostly Labour Party, and celebrities claimed that ‘engagement’ with the regime could push them towards reform. In fact, in the year since the dictatorship took over, there has been a crackdown on opposition. Two women, Salma -al-Shebab and Nourah al-Qatani were handed down draconian sentences of 34 and 45 years, plus the same number of years in travel bans on top.

The ‘Vision 2030’ project includes the building of the Neom megacity. People of the Howeitat tribe are being forcibly evicted from their land to make way for the megacity. Three tribesmen – Shadli, Atallah, and Ibrahim al-Howeiti – have been sentenced to death for defending their land.

The day before Newcastle played Chelsea last season, the lead dictator, Mohammed Bin Salman ordered the mass execution of 81 men. This was a clear message to everyone that the Saudi state would do whatever they liked and that ‘engagement’ was a nonsense.

On the first anniversary of the takeover on 7 October 2022, the NUFC Fans started to receive more publicity in the North East, nationally but also in Germany, Sweden and in Middle East publications.

The campaign was contacted by Saudi activists and exiles who suggested that they highlight the cases of eight minors who have been sentenced to death for alleged crimes carried out before they were eighteen. Most of the young men were arrested for protesting and tortured into making ‘confessions.’. The Saudi regime, due to pressure, had agreed not to execute minors, but gets round the moratorium by playing cat and mouse with the young men, releasing them, harassing them and their families, then rearresting them when they reach eighteen.

NUFC Fans against Sportswashing have been attacked and threatened on social media. This has been specifically linked to an army of professional trolls employed at the Etidal Global Centre for Combating Extremist Ideology in Riyad, a state-run institution. The Saudi state is sparing no expense to close down criticism of them in the North East. Unfortunately, they have managed to get a layer of supporters to repeat their propaganda, who label jailed women and minors, ‘terrorists.’ This is a worrying development and must be combatted.

The role of Labour politicians in the North East on the issue has been lamentable. NUFC Fans Against Sportswashing and human rights groups have written to MPs and councilors, some of whom claim to be on the left, urging them to speak out about how the Saudi regime is using ownership of Newcastle United to sportswash away their brutal oppression and gross human rights abuses. There was zero response. It has been left to ordinary fans to take up the issues.

The campaign protested outside the recent Newcastle vs Chelsea match and received a lot of attention. Most fans respected our right to protest, and a marker was put down to say there are fans who oppose the ownership and we will continue to campaign against the dictators who own the club. More fans are stepping forward to join the campaign and it is serving as a catalyst to enable fans to express their discontent at the state of the game.

The fat cats, oligarchs and now dictatorships who wish to completely takeover the beautiful game and make it ugly, pump out the narrative that, ‘fans are powerless’ and we just have to accept the world the way it is. The same argument workers and oppressed people face around the world. But soccer fans are rejecting this pessimistic perspective. The spotlight is on the Qatari and Saudi dictatorships and the soccer authorities and governments who enable them to oppress their populations with sales of arms and torture devices. Soccer fans are showing we can fight back and win. The game is on!