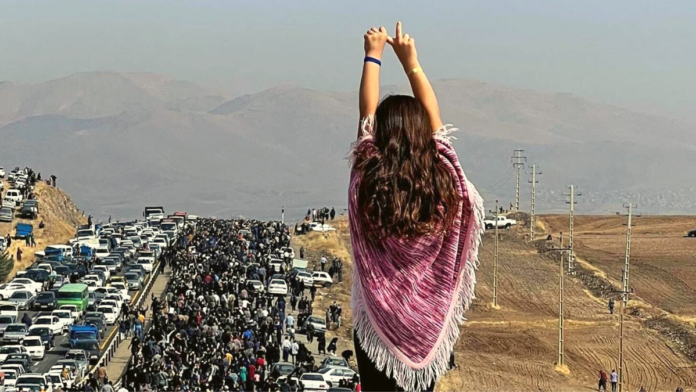 Women, young people, and workers are revolting against the repressive, misogynistic, and corrupt ruling regime in Iran. The mass movement began in mid-September in reaction to the horrific killing of Jina (Mahsa) Amini, a young Kurdish woman, by the so-called morality police for allegedly not wearing the hijab correctly.

The movement has taken up the slogan, “Women, Life, Freedom”, which originated with women activists in the fight for Kurdish liberation. Young women are at the forefront of this movement, which is demanding an end to state control of women’s bodies, an end to the repression and deadly violence against protesters, and an end to the regime itself.

Since the Iranian revolution of 1979 was stolen from the Iranian masses by the authoritarian theocratic regime headed by Ayatollah Khomeini, women have been once again relegated to second-class status. Gender segregation is standard in schools and many other settings, abortion is illegal, women are severely limited from accessing divorce, and they must obtain permission from their husband or father to travel abroad.

Women face frighteningly restrictive and dangerous conditions in Iran, but certain recent societal trends have contributed to women developing more confidence to fight back. The Iranian population is becoming more urbanized, and more women are attending university and working outside the home. For the last 20 years, women have outnumbered men in Iranian universities.

This is not the first time that the requirement to wear the hijab sparked mass protests. In 1979, the Ayatollah Khomeini decreed that women must wear the hijab on March 8, International Women’s Day, when women activists had already planned demonstrations.

Seven days of protests ensued, with women sometimes having to defend themselves from reactionary religious men who physically attacked protesters on the streets. Protesters chanted, “We didn’t have a revolution to go backwards!” The decree was rescinded as the new regime struggled to assert itself, but two years later the requirement to wear a hijab was firmly re-established.

Today the hijab is a symbol of the state’s oppression of women, and women have been publicly burning their hijabs in the streets in protest. Protests developed rapidly following news of the death of Jina Amini in the Kurdish region of Iran where she was from, and then in Tehran. Soon, protests spread to cities all across the country, including in some cities that have traditionally been highly religious bastions of support for the regime.

Students have energetically joined the protests, and pictures and videos have gone viral worldwide, such as the one showing a group of young school students giving the middle finger to “Islamic Republic” written on the blackboard.

Workers have also joined the protest movement, going on strike and closing retail shops, schools, and factories. Importantly, oil workers have initiated some strikes, shutting refineries and threatening the flow of profits from Iran’s dominant export. The determination and fearlessness of protesters and their uncompromising demand to end the rule of the Ayatollah, the spread of protests across the country, and the development of strikes as part of the movement – all of these factors mean that the Iranian regime is facing the biggest threat to its rule since it took power.

Several large protest movements have developed in Iran over the last 15 years, which pushed the regime to further consolidate itself around religious hardliners. In the 2019 presidential election, more moderate candidates were removed from the ballot, ensuring that Ebrahim Raisi, a hardliner with a reputation for brutality, would become the next president. Raisi’s rule has been marked by cracking down further on women’s rights and social freedoms – actions that sharply contrast with the consciousness of big sections of Iranians, especially youth, many of whom are connected to the experiences of young people in other countries through social media and who reject the restrictions on personal freedom imposed by the regime.

Underlying the resolve of the protest movement and the demand to overthrow the Islamic Republic regime is the increasingly dire economic situation of working class and middle class people. Particularly after Trump pulled out of the Iran nuclear deal in 2019 and imposed punishing economic sanctions, Iranians have faced unemployment, a sinking currency, and out-of-control inflation.

It’s now estimated that 60% of the population is living at or below the poverty line. Young people face extremely high unemployment, and are often unable to move out of their parents’ homes or start families. As one protester said, “There’s just too many people with nothing to lose now.”

Taking On The Regime

With protests continuing to flare up, recently to mark the 40th day since Amini died, the regime has few choices, and has not made any move to offer concessions to the movement. Instead, police and the Basij, the paramilitary wing of the Revolutionary Guards, have killed hundreds of protesters and arrested thousands. Recently, the regime has begun to bring arrested protesters and other political prisoners to trial, and on November 8 the Iranian Parliament voted overwhelmingly to impose the death penalty on 15,000 protesters in custody. and in some cases is charging them with offenses that can carry the death penalty. Struggling to control continued protests, the regime is buckling down with even more bloodshed in an attempt to stifle the movement through violence and fear. If protests continue and the regime struggles to control them, it could resort to more bloodshed in an attempt to stifle the movement.

There is an urgent need for Iranian workers and youth to rapidly build organizations to coordinate a revolutionary fight against the regime, under the democratic control of workers and students themselves. Neither the return of the pro-Western monarchy that was defeated by the revolutionary movement in 1979, nor liberal, pro-capitalist figures offer a way forward for the Iranian masses. Ultimately, any and every capitalist force vying for power in Iran is focused on control of the flow of profits from the oil industry, and will use the most brutal repression to put down revolutionary threats.

The liberation of women in Iran, and the liberation of Iran’s minority groups like the Kurds, requires a transformation of society along socialist lines to democratically run the economy for the benefit of the entire working class, and put an end to division and oppression.