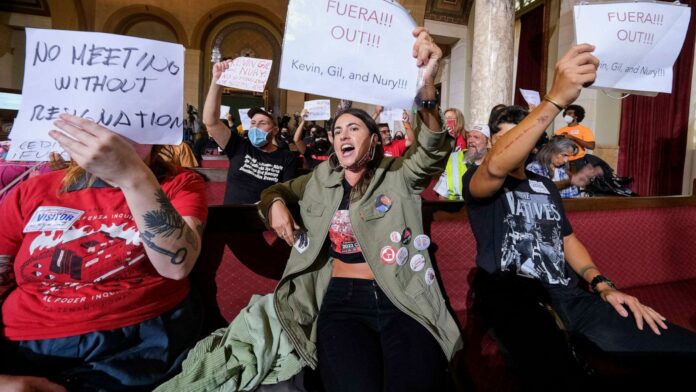 Earlier this month, a recording of a conversation held between Los Angeles City Council President Nury Martinez, City Council members Gil Cedillo and Kevin De Leon, as well as President of the LA County Federation of Labor, Ron Herrera, was leaked. The conversation was full of racist comments towards Black and indigenous people broadly, and more specifically another councilmember’s Black son. This stirred up a fury of outrage in a city that is deeply marked by systemic racism.

The meeting, held in October 2021, was to discuss the once-a-decade process of council redistricting. The four were focusing on how best to divide up the city to give themselves and other Latino councilmembers more “assets,” with a focus on how to maneuver to ensure LAX and USC remained in their hands as opposed to the other non-Latino council members. If the city council is allowed to redraw the map anyway they like, they will use it to consolidate their power and weaken those they see as a threat.

The conversation included a blunt and ugly appraisal of where the other public officials stood. In reference to District Attorney George Gascon, Nury Martinez is heard saying “F*** that guy, he’s with the Blacks.” She went on to describe council-member Mike Bonin’s Black son as a “changuito” or “like a monkey” who she would have gladly given “a beatdown” after he was allegedly misbehaving during the annual Martin Luther King Jr. parade. The other three chimed in with racist bile of their own.

At one point, when describing how to divide up Koreatown, a predominantly Latino part of the city, Gil Cedillo and Nury Martinez are heard going back and forth debating how much of it to “give” to Nithya Raman, a DSA member elected in 2020. “She is not our ally. She is not going to help us.” says Cedillo. Martinez chimed in with, “It serves us not to give her all of K-Town, because if you do that solidifies her renters’ district and that is not a good thing for any of us. You have to keep her on the fence.” She went on to describe how the constituents of Koreatown comprised “a lot of little short brown people.”

Dozens of people showed up to the City Council chambers the day after the leak to demand the resignation of the three councilmembers. As of this writing, Ron Herrera and Nury Martinez have resigned while Gil Cedillo and Kevin De Leon continue to resist the call to step aside. Thankfully in the June primary Cedillo was defeated by DSA member Eunisses Hernandez, and will not retain his seat. Regardless, Socialist Alternative is in complete solidarity with the sentiment of ordinary Angelenos that these kinds of racist remarks cannot be tolerated and that Cedillo and De Leon should resign immediately.

Your Friends Show Who You Really Are

While they have thoroughly disgraced themselves, the leak of this conversation between some of the most powerful representatives of the Democratic Party establishment in Los Angeles has simultaneously provided a clarifying service to ordinary working people in the city. They have inadvertently pulled back the curtain to show how they really see themselves and their role in office. They view their city council districts as their own personal fiefdoms, attempting to cynically manipulate the solidarity of Latinos and utilize anti-Black racism to advance their self-serving political ambitions.

The involvement of the President of the LA Labor Federation – which represents 800,000 workers in over 300 unions – is shocking but sadly not surprising. Socialist Alternative has consistently argued that right now, the key obstacle to the revitalization of a fighting labor movement is the conservative leadership of most official unions, and their conscious subordination of labor to the electoral needs of Democratic politicians. This is the fundamental reason why they have failed to provide direction and resources to the recent upsurge in labor militancy at Starbucks, Amazon, and other unorganized workplaces. It is the reason why socialists outside of and within unions must fight to replace them with leaders who understand the importance of class struggle methods and link their organizations to broader movements to fight oppression.

The resignation of Herrera and Martinez is a positive and necessary step forward. But with their likely replacement by others who share their commitment to the political status quo within LA, the question is posed: How do we ensure that racist behavior like this doesn’t happen again?

It reflects well on Nithya Raman that people like Cedillo and Martinez don’t view her as an ally. But why is she choosing to remain in the same party as these people? The subtext of this scandal is clear: the local Democratic Party leadership and their lackeys in the labor movement are a club reserved for those who wish to serve the interests of the capitalist establishment. They will never give up this position and do everything in their power to sully and undermine attempts from well meaning socialists and progressives to challenge them.

The LA City Council, American Democracy, and a New Party

The context of the leaked conversation went on to become reality when the new district map, approved 13-0 in December 2021, erased 40% of DSA councilmember Nithya Raman’s district. The call for a truly independent commission to take over this process has grown louder, and would be a positive step forward. But we must be clear-eyed about its limitations.

For those who take public office with a desire to win progressive change, they must understand that they are walking into a lion’s den. Under capitalism the forms of the state are continually twisted and bent to consolidate the power of those who support the status quo, and isolate those who would seek to change things, like Raman. The undemocratic redistricting process in Los Angeles is not an isolated incident; it is a part of the broader trend of both Republicans and Democrats to undermine democracy to their advantage, whether it be through restricting voter access, redrawing maps through gerrymandering, or relying on the unelected Supreme Court to get their way.

The movement to force Cedillo and De Leon to resign should continue, with regular protests and co-ordinated actions leading up to the November election. If Hugo Soto-Martinez wins, the Democratic Socialists of America will have three representatives on the council. They should resign from the Democratic Party and begin the process of forming an independent left wing alternative, in consultation with all the Angelenos who are sick of the two party system and ready for a left wing, pro worker alternative. The lack of such an organization arising from the movements of the past few years, is a key reason why the Democrats and Republicans have been as successful as they have in eroding democratic rights.

We need political independence from the Democratic Party, with a new party that puts full control over the election and possible recall of elected officials in the hands of its members, that requires they only take the average wage of a worker they represent, that fights unambiguously for a political program that galvanizes and unites working people to tack on the Democratic Party establishment, because it is this establishment that is ultimately to blame for what has unfolded.