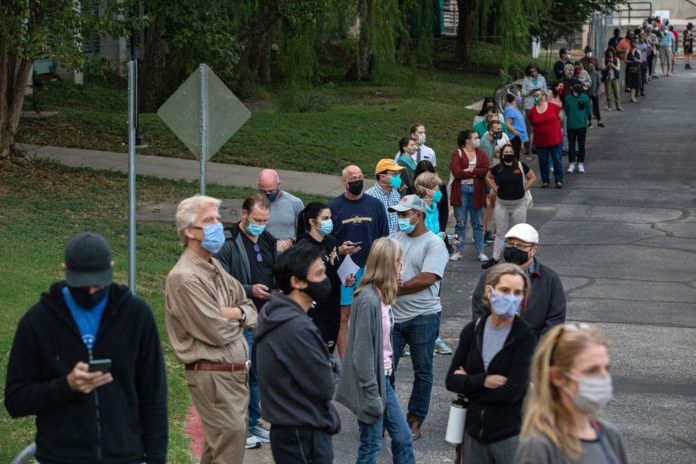 UPDATE ON 11/1: Since the publishing of this article, further attacks from conservatives and Republicans in Texas have further jeopardized hundreds of thousands of votes. Nearly 127,000 people voted early in Harris County, one of the largest counties in Texas, using a drive-through system designed to be COVID safe. Now, a wealthy conservative activist, a Republican state representative, and two GOP candidates aim to throw out those 127,000 ballots at the last minute. On top of all the racist voter ID laws and long wait times, it’s clear these lawsuits are aimed at disenfranchising black and working-class voters.

Ensuring that these ballots count will require a struggle. The race in Texas could be very close and if Trump encourages the state to discard these ballots, it could hand him the state on the basis of theft. We can’t rely on the DP to lead a fight to defend the vote. It’ll take more than appealing to their goodwill, the failed strategy of the Congressional Democrats, that has left us with no new stimulus package, millions unemployed, and a dangerously conservative Supreme Court. The struggle for voting rights needs to go hand in hand with the fight for a new party, one that stops at nothing to fight for the interests of the multi-racial working class.

With just a few days until the election, tens of millions of Texans have already cast their ballots despite countless attempts from the state’s Republican party to stop them from doing so. The courts, which are rarely on the side of working people, have upheld some of the most repressive voter suppression measures, and as the Wisconsin law disqualifying ballots received after election day has been upheld by the Supreme Court, Texas is looking to follow suit.

Texas is considered a “red state,” but more accurately it’s a non-voting state. Fundamentally this is because working class people, especially immigrants and people of color, don’t have anyone to vote for when both parties seem to agree on questions of deportations, mass incarceration, and defending corporate profits. In addition, counties with larger populations like Harris County, which contains a disproportionate concentration of Democratic voters, Latinos, and Black people, have the same number of polling locations and voting machines as rural, sparsely populated, Republican-leaning counties. This is not due to a lack of resources, but is intended to make voting more difficult. It is no coincidence that during the primaries, the longest wait times were in poor, Black and Latino neighborhoods.

These issues are long-standing, and have been further exacerbated by COVID-19. Despite the risks of voting in person as the state faces steadily increasing COVID-19 cases, Governor Greg Abbott refused to expand mail-in voting access, which is only available to people over the age of 65, who have a proven disability or illness, or who are out of the state during the voting period. Abbott then mandated that every Texan county have only one official ballot drop-off location, forcing Harris and Travis counties to close dozens of sites. This may not be an issue for counties that have the same population as some Houston highschools, but Harris County has a population of 4.7 million! It means well over a day’s journey for the elderly and disabled (those most prone to infection) without knowing if you will even drop off your mail-in ballot.

So while the vast majority of people will be forced to vote in-person in unsafe conditions, the elderly and disabled who rely on ballot drop boxes face further barriers to casting their votes. While polling shows Biden with a shot at winning the state, Trump’s Republican allies and lawyers in the state are working overtime to undermine that chance through these various forms of voter suppression.

Latinos are on track to be the largest population group in the state of Texas. The number of Black Texans also continues to grow, though it has hovered around 12% for the past several years. Both groups are overwhelmingly working class. However, it would be a crucial mistake to assume demographic changes automatically means political power, or Trump’s defeat this election. In the aftermath of the 2008 election, Democratic Party strategist James Carvill published the infamously titled book“40 More Years: How the Democrats Will Rule the Next Generation.” He underestimated how the GOP could capitalize on popular anger at Obama’s corporate friendly politics – a danger that exists with Biden’s corporate campaign today.

However, these changes have sent terror down the spines of many Republicans who understand that Latino Texans could become such a formidable voting block in the next decade that it would be nearly impossible for them to make electoral gains – especially in major cities. The Republicans’ current scramble to suppress the Latino vote in particular is a foreshadowing of the racist maneuvers they will attempt to drive through in the coming years, especially with redistricting around the corner in 2021.

The Democrats have typically been able to win a substantial portion of the Latino vote. Biden’s campaign is focusing significant attention in the final week of the campaign on Latino majority cities like El Paso. However, despite the general “Blue” trend among Latino voters, Biden is finding himself in trouble with half the lead Hillary Clinton had in 2016. While certain Latino voters are gravitating toward Trump, many more will simply sit this election out as Biden has very little to offer them. Bernie Sanders beat Biden by a wide margin among Texas’ Latino voters, showing that if there were a genuine progressive alternative on the table it could be a pole of attraction.

Whose Vote is Being Suppressed?

Voter suppression is not equitable, and in Texas its design is to disenfranchise Black, Latino, and working class voters. Barring former convicts from the ballots stifles voting in over-policed Black and Latino communities. To vote, you need a Texas ID. Voters who do not have a proper form of identification are disproportionately low-income, racial and ethnic minorities, the elderly, and people with disabilities. Obtaining an ID costs money, for the ID itself, documents needed to obtain the ID, and the cost of travel to ID offices, which poses barriers to low-income voters of color. These same voters also often cannot afford the cost of missing work to wait hours in line to vote.

As part of building a movement for Medicare for All and a Green New Deal, working-class Texans need to organize to defend democratic rights – including defending polling and vote-counting locations from right-wing forces. We can’t rely on the same Democratic Party that offered no effective resistance to these attacks in the first place. Other important measures include: reopen and further expand mail-in ballot drop off locations, the option of universal mail-in voting, abolish voter ID laws, automatically register people to vote when they turn 18.

Without an organized resistance to defend against voter suppression and other threats to democracy, the corporate Democratic and Republican parties will continue their gerrymandering and voter suppression tactics. The fight for voting rights goes hand in hand with the fight for a a new political party, one that will faithfully defend the interests of the multiracial working class, taking up the fight for a $600/week unemployment top-up and a new round of stimulus checks, a cancellation of rent and extended eviction moratoriums, Medicare for All, a Green New Deal, and a federal $15 minimum wage. Such a party could cut across the Red/Blue debate that artificially divides the working class in Texas and the whole South by speaking to conditions facing all workers. It could be a powerful force to defend democratic rights, and would actually be worth voting for.