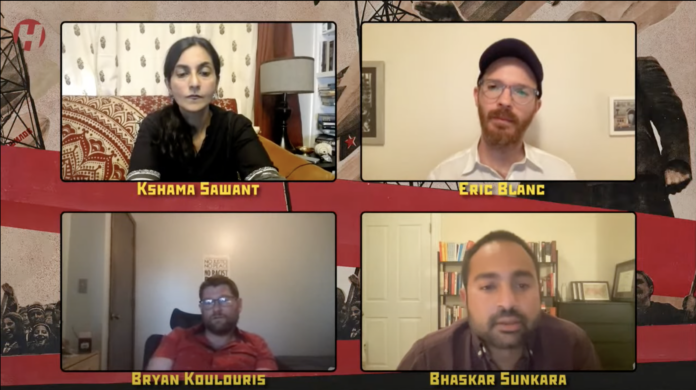 On July 28, Bhaskar Sunkara, president of The Nation, facilitated a debate between Eric Blanc, author of recently released book Revolutionary Social Democracy, and Socialist Alternative members Kshama Sawant, socialist Seattle city councilmember, and Bryan Koulouris, Socialist Alternative’s national organizer. The debate was a spectacular and engaging encapsulation of the broad debate on the left between reformists and revolutionaries.

In it, Blanc defends the central conclusions of his book which is that the lessons of the Bolshevik victory in the Russian Revolution have little to do with the situation today. He insists that a “Leninist revolution” is not possible in contemporary capitalist democracies and that instead we should pursue a parliamentary road to socialism, seeking to win a socialist majority using the tools of the capitalist state. Kshama Sawant and Bryan Koulouris draw on the lessons of France in 1968 and Chile in 1973 to dispute Blanc’s central conclusions. They describe how in the age of capitalist disorder we’re currently living through, there is no stable base for mass social democratic parties. A slow a steady parliamentary road to worker power is simply utopian.

The order of the day around the world is revolution and counterrevolution. It’s critical that socialists fight to achieve clarity on forms of working class self organization that are needed to overthrow this rotten system. For that reason we’re glad Eric Blanc and Bhaskar Sunkara hosted this vibrant debate. Below you can watch the full debate and read the transcript of Kshama Sawant’s opening statement.

Thank you very much for inviting me to this debate.

I think this subject is of enormous importance to the working class, and am glad for Blanc’s book from that perspective, though I disagree with its main conclusions. I also think it’s important that socialists be able to make their points clearly and sometimes sharply – it’s not personal.

Today’s world situation cries out for genuine Marxist analysis and action based on the revolutionary potential of the working class, as the Bolsheviks had in carrying out the Russian Revolution, the most progressive event in the twentieth century.

Marxism means not dogma or eclectic dabbling, but applying an implacable scientific lens to events, and drawing up strategy based on evidence and the logic of class antagonisms.

Comrade Eric says the underlying mistake by Lenin and the Bolsheviks was believing that the revolutionary approach would work in modern capitalist democracies. He chooses Kautsky’s parliamentary road to socialism, requiring the election of a socialist majority to parliament. In this, Eric holds up the Finnish Revolution of 1917-18 as a model.

The most profound and fundamental errors in this analysis are missing the lessons of both the Russian and Finnish revolutions, and failing to understand the capitalist state. Contrary to Eric’s faith in parliament and congress as a means for good, the brutal nature of the state under capitalism comprises all its institutions: not only the police, the courts, and the prison system, but also parliaments, and the U.S. Congress.

Understanding this was central to Bolshevism, but wasn’t new. Marx and Engels themselves drew the same conclusions about the role of the state under capitalism through their study of the 1848-1852 revolutions, and later the Paris Commune in 1871.

As Lenin said in his brilliant work, “State and Revolution,” a “democratic republic is the best possible political shell for capitalism.” And this is true even though Marxists have correctly fought for democratic rights.

As Marx and Engels explained, and as Lenin reiterated, the role of even the most “democratic” parliament under capitalism is to maintain class rule. The capitalists will fight tooth and nail against any attempt to use it to uplift the masses. If it stops working for them, they will undermine or dissolve it.

We cannot build socialism, which requires taking the levers of the economy into the hands of the working class, without confronting the brutal resistance of the capitalists and their state.

As Engels said, in the final analysis, the state is violent armed bodies of men who enforce the rule of the capitalist class by whatever means necessary.

This was shown tragically during the Finnish revolution.

Inspired by the Russian Revolution, the Finnish revolution broke out in late 1917. The capitalist class organized anti-socialist armed militias to ward off the threat of a Bolshevik Finland. The militant workers and socialists called a general strike that was so all-encompassing that workers were poised to take power.

Eric makes a crucial mistake in presenting the Finnish SDP as a “revolutionary” alternative for today. In reality, the Finnish social democrats were deeply divided. The SDP had a big bureaucracy who lived a comfortable lifestyle, with the parliamentary members enjoying especially high wages. This bureaucracy was increasingly getting close to bourgeois liberals and the overthrowing of capitalism became a remote prospect.

Because of this, they made fundamental errors like calling off the general strike after four days and at its height. Despite this, the revolutionary mood among the Finnish masses was so strong that large swathes of the working class and peasants understood the need to overthrow the capitalists, as opposed to having faith in a parliamentary process.

As the capitalists prepared systematically for counter-revolution, the SDP moderates were forced to respond to the mood of the masses and form a kind of workers’ government in the bourgeois democratic framework.

But the fatal theoretical mistake of the Finnish SDP leaders, even the most well-intentioned ones, was believing that the working class needed to stop there and look to form a coalition government with the ruling class, that workers should not fight to seize power. The SDP leaders shut down workers’ councils similar to the Soviets in Russia.

They mistakenly believed in a reformist approach, that their electoral victories would mean the capitalist class would be agreeable to a peaceful road towards sharing of power and then socialism, that the state could serve two irreconcilably opposing classes.

Eric’s writings gloss over the bloody counter-revolution by the Finnish capitalists and the devastating defeat for the working class, with tens of thousands of the most heroic workers being slaughtered and some five percent of the entire Finnish population locked in political concentration camps. Sadly, these consequences came from precisely the same mistakes being proposed here today: based on not understanding the need to smash the capitalist state through workers self-organization led by a Marxist party. That a situation of dual power will never be tolerated by the capitalists.

These are not secondary details if one is proposing the Finnish revolution as a model of the “democratic road to socialism.”

Engels said: “the working class cannot simply lay hold of the ready made state machinery and wield it for its own purposes.”

The Russian revolution was successful partially because Lenin and the Bolsheviks understood this.

In contrast, the example of 1970s Chile showed the limits of electoral politics and the reformist road. A bloody coup was the consequence of failing to understand the need to smash the capitalist state and resolve dual power through a workers’ revolution.

I was in India in 2019 during the momentous general strike involving over two hundred million workers. In some countries, the movements of 2019 went further even than India. They saw situations of dual power, workers running the workplaces. None led to a decisive victory for workers due to the lack of mass revolutionary parties, but situations of dual power continue to occur.

Eric claims that the “founding ‘myths of Leninism’” are that the Bolsheviks broke from Kautsky on the state and had a different organizational model than the rest of social democracy. These aren’t myths. They’re confirmed by major primary sources on these historic events and by the course of history itself. Lenin and Kautsky’s differences on the state are documented in both of their central works and actions.

The democratic centralism of the Bolsheviks and of Socialist Alternative is based on maximum debate to find agreement. It has nothing in common with Stalinism – and it is also not alien to the workers’ movement. When a majority of workers vote to go on strike, they aim to convince the workers who voted no, but EVERYONE is expected to take united action.

Socialist Alternative has led historic victories in Seattle like the $15 minimum wage and the Amazon Tax. Just yesterday, we won landmark legislation, mandating Seattle Police not enforce out-of-state abortion-related arrest warrants, in the wake of the Roe v. Wade ruling. Each time, we have succeeded only by overcoming the unrelenting opposition of all institutions of the ruling class. By:

This is Bolshevik – that is, Marxist – politics. This is precisely why our track record of winning reforms is unfortunately unique on the socialist left today.

In a time of renewed labor organizing and an assault on the oppressed by the right-wing, DSA has unfortunately been stagnant and even declining in membership. We think this is due to their over-focus on electoral politics and connection to the Democratic Party. The Squad’s example demonstrates how utopian it is to believe that there is a parliamentary road to systemic change. Their faith in the capitalist state and Democratic Party has meant that they have refused to engage in any semblance of class struggle and fight for the programs they ran on. They are less and less a point of reference for young people in struggle.

The Economist carried a recent headline, “from inflation to insurrection.” Capitalist governments are building up their repressive apparatus.

We live in an era of extreme capitalist disorder. Inflation, recessions, food crises, war, and environmental catastrophe. If human civilization is going to survive, capitalism must be overturned entirely and replaced with a socialist world.

Instead of a parliamentary road to socialism using Democratic Party ballot lines and endorsing Biden, we should build our strength from below with clear Marxist politics and a struggle to end capitalism and all exploitation and oppression.