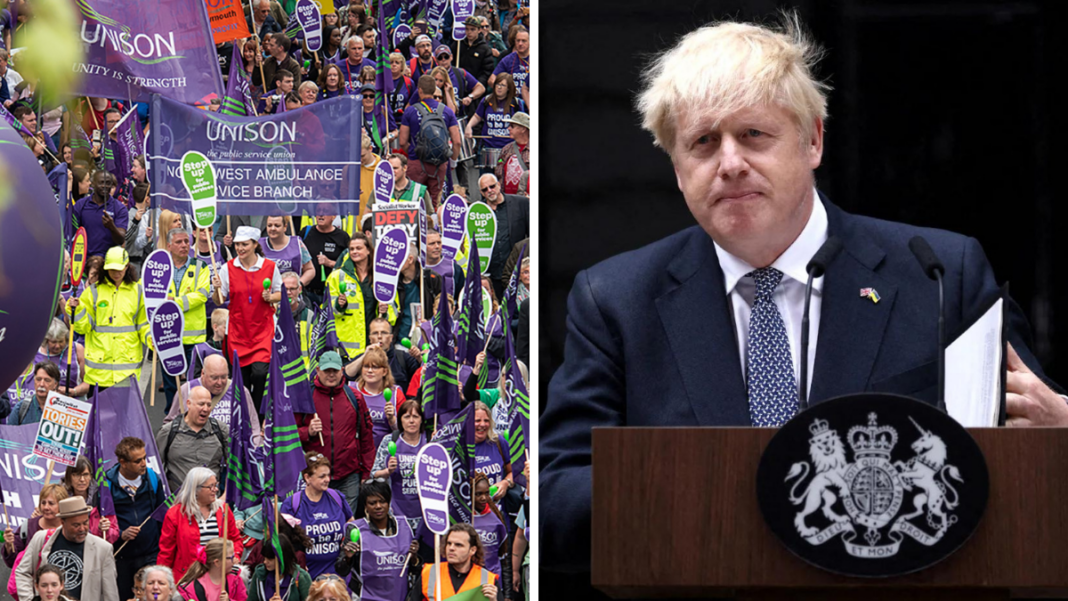 After two days of humiliation, 59 resignations and one sacking, Johnson has finally succumbed to overwhelming pressure and resigned as Tory leader. Yet far from drawing a line under this crisis, it fires the starting gun on what will be months of bitter Tory infighting.

Even before the leadership contest is underway, a battle over the timing of Johnson’s departure and his failure to immediately step down as Prime Minister is in the offing.

Working-class people everywhere will cheer Johnson’s departure. His exit takes place in the context of a rising tide of anger across society. It comes, not coincidentally, just as that mood of anger has begun to find a voice in freshly assertive train union struggle.

Capitalist commentators have focused on the engrossing if often lurid details of the drama as it played out in Westminster. But MPs who backed Johnson to the hilt despite his well-documented history of lies and sleaze have not suddenly remembered the value of ‘integrity.’

The summer of discontent, with protests and strikes demanding an end to spiraling prices and stagnant wages, was a critical factor in hastening Johnson’s demise.

Now, with Johnson sent on his way, strike action must be escalated, broadened and coordinated. Victories can be won more readily with the Tories weak, divided and in chaos. What’s more, the workers’ movement has the potential to be the force that can kick out the Tories altogether and demand an end to the crisis in working-class living standards.

It’s this working-class movement that points towards the real alternative to Tory rule. Tellingly, Starmer’s Labour leadership has made a big play of its credentials as a ‘government in waiting’ being linked to a total unwillingness to back workers fighting back.

MPs attending picket lines have even faced disciplinary threats. Putting Starmer in number 10 is no solution because he too is wedded to the chaotic capitalist system. He too will seek to make ordinary people pay for the fast-developing economic crisis and probable recession.

Meanwhile, all shades of arch-reactionaries are lining up to put their hat in the ring for Tory leader. Climate deniers, migrant bashers, misogynists, you name it. Whoever emerges the victor will be no friend to working-class, poor or oppressed people.

That’s why, along with stepping up and coordinating strikes and protests, we need to put on the agenda a political alternative to pro-capitalist politics.

To maximize what can be won, it’s vital that a resurgent industrial fightback goes alongside the development of a real political alternative to this rotten system. A new left party, rooted in the real struggles of working-class people, would be a crucial step towards that.

Following on from last month’s town hall meetings and mass demonstration, the trade unions could call conferences of resistance to discuss where next for the fight against the cost of living crisis, to build solidarity with existing disputes, and to begin discussions on developing real political representation for working-class people.

Socialist Alternative fights to take power out of the hands of the capitalists and their representatives and into those of working people. We stand for public ownership over the big monopolies that dominate and democratic economic planning to sustainably meet the needs of all.