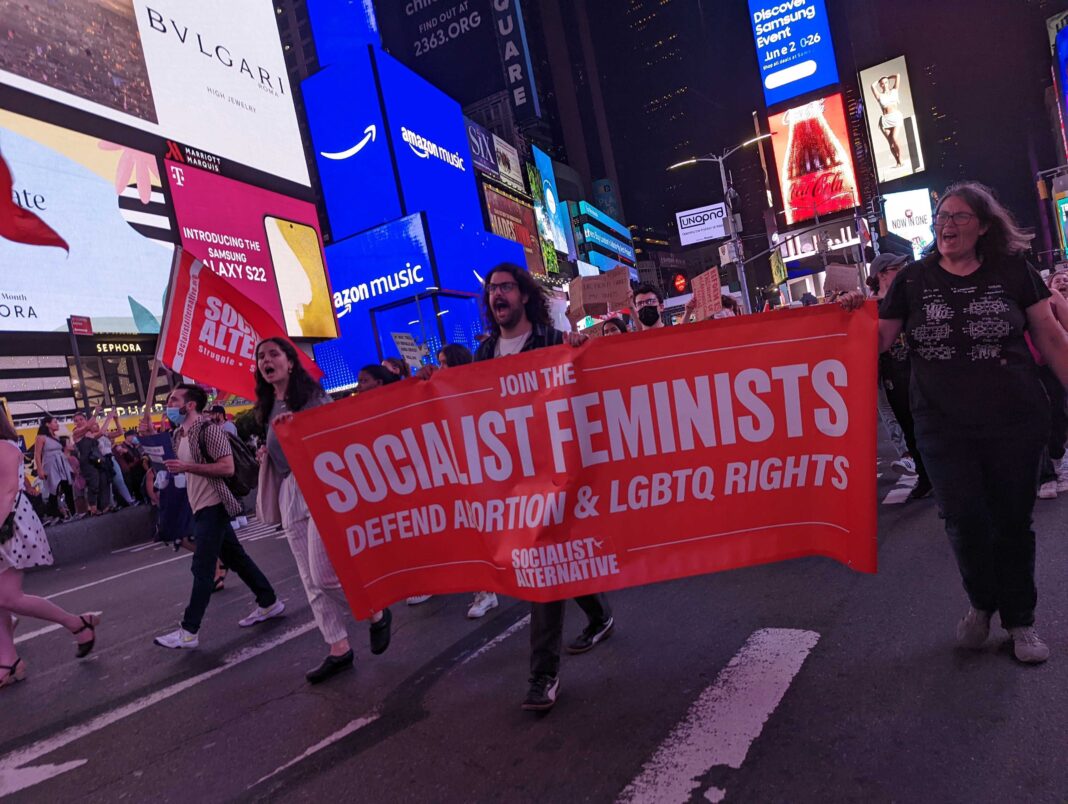 The day the Supreme Court announced their overturn of Roe v Wade, tens of thousands took to the streets across the country. The shameful, right-wing ruling runs counter to the support for legal abortion by the majority of American working people. But the protests also made very clear that millions are enraged at the complete failure of the Democrats to fight back and at the idea that all we need to do now is vote blue in November.

In New York, over 20,000 people angrily marched through Manhattan, led by Socialist Alternative and other left groups and unions. The energy at the demonstration was so ferocious that the march went on for four hours.

In Houston, where Socialist Alternative put out a call for mass protests at the federal courthouse, five thousand people turned out. In a now viral video from the protest, Democrat Beto O’Rourke, who showed up asking for a speaking slot, can be seen hanging his head in shame as the crowd around him chanted “Voting blue is not enough! Democrats we call your bluff!”

In every city where Socialist Alternative organized demonstrations, our members report that the crowds were full of young people furious at not just the obvious barbarism of the right, but also the inability and refusal of the Democrats to defend even basic rights.

It is not lost on people that immediately following the ruling, the party in power, rather than fighting to codify Roe or implement executive orders to protect abortion rights which the vast majority of society supports, instead put on a performance of God Bless America on the steps of the Supreme Court. As comical as it sounds, this really happened.

Hours after the ruling, Democratic fundraising emails started coming in like an avalanche.

“Please, I’ve never needed your support more than today. Can you chip in $15 so we can WIN these midterms and finally codify reproductive rights into law?” Nancy Pelosi wrote. “Can you rush in a donation of any amount to stop the far-right and elect a pro-abortion rights Congress this year?” asked Rep. David Cicilline.

These insulting pleas by the Democrats for money and votes are facing widespread anger from young people. As one young woman said, “It’s like asking us to buy into a broken system yet again in the hopes it might fix itself; it won’t.”

The Democrats, with their control of the White House and majorities in Congress, have the ability to take meaningful steps – if they had the political will – to overcome this attack from the right.

This very second, Biden could:

Beyond this, Biden and the Democratic leadership in the House and Senate can fight tooth and nail to codify Roe. They can use every tactic at their disposal to force Joe Manchin and Kyrsten Sinema to get on board with abolishing the filibuster and passing the Women’s Health Protection Act. They can also urgently repeal the Hyde Amendment and tax the billionaires to massively expand funding for clinics now buckling under increased demand.

In addition to these steps that would make a dramatic difference in people’s ability to access abortions, we also need a host of social services to ensure people can afford to have children when they want them.

This means an immediate transition to Medicare for All on a federal level to make all reproductive and gender affirming care free. It means bringing back the pandemic-era child tax credits, and fighting for universal childcare and fully funded public schools, all of this funded by taxing the wealthy.

AOC is right when she says: “The President & Dem leaders can no longer get away with familiar tactics of ‘committees’ and ‘studies’ to avoid tackling our crises head-on anymore.”

She has called on Biden to take immediate executive action to protect abortion access and I wholeheartedly agree. But as we’ve learned through the experience of AOC and the Squad,  just asking corporate Democrats to act will never be enough. Socialist Alternative’s nearly nine years in office in Seattle have shown that we need to build a movement powerful enough to force Democratic politicians to take action, despite their opposition.

Like Cori Bush did with the eviction moratorium, AOC, Bernie, and other members of the Squad should call for an occupation outside the White House demanding Biden use executive action to open abortion clinics on federal land and expand access to abortion pills. We can organize protests at federal buildings in cities across the country in support.

If the Democratic leadership still refuses to act, we will need to step up the pressure with protests and direct action at the offices of Democratic leaders like Chuck Schumer and Nancy Pelosi. After the leaked ruling in May, Socialist Alternative in New York and the Bay Area organized sit-ins at Pelosi and Schumer’s offices. Thousands of people tuned into the live streams, eagerly cheering them on. This is the type of action we will need to take if we’re serious about forcing the Democrats to act.

While we ramp up our demands on the Democrats to take immediate action on the federal level, there are crucial fights we can wage at the state and local level to ensure abortion access for both residents and out-of-state visitors.

In Seattle, my socialist City Council office is introducing legislation making Seattle a sanctuary city for anyone facing a legal penalty in their home state for seeking or providing an abortion. If passed, the legislation would prevent Seattle Police from arresting people, either patients or doctors and other care providers, for outstanding warrants related to anti-abortion laws in other states. We will also be bringing People’s Budget legislation to make abortion free in Seattle for people traveling from states with anti-abortion laws as well a Seattle residents, funded by increasing the Amazon Tax we won in 2020.

DSA elected officials in other cities should bring forward and fight for similar legislation. Our Council office is happy to be a resource in providing draft legislation and discussing the best strategies to build grassroots pressure to ensure its signed into law.

We Need An Independent Mass Movement

In order to respond to the onslaught of vicious attacks from the right, we need an independent mass movement that can provide a homebase for young people and workers looking for a way to fight back.

As Socialist Alternative wrote the day of the Supreme Court ruling:

We need to run independent socialist and working-class candidates as an immediate step toward building a new party for working people and youth that will unambiguously fight for our interests.

I call on every other elected socialist, every labor leader, and every social movement leader to join me in the call for a democratic mass movement, new mass organizations of struggle, and a once-and-for-all break from the rotten Democratic Party which has enabled the right-wing war on our bodily autonomy.