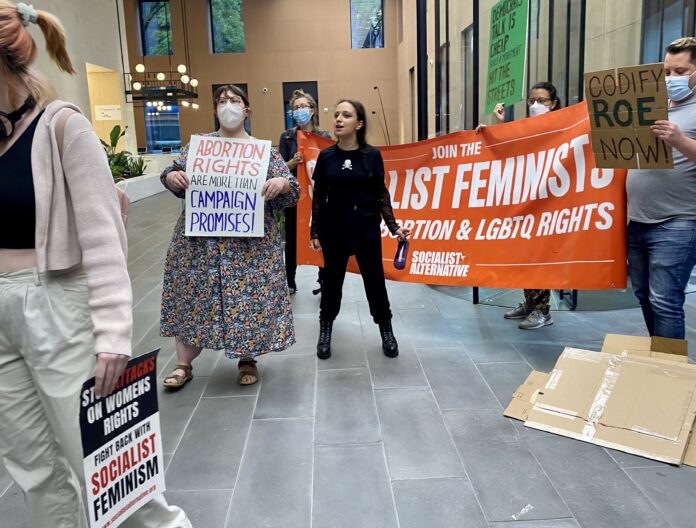 Socialist Alternative led a sit-in yesterday, May 25, in the lobby of Chuck Schumer’s office in Manhattan demanding an immediate end to the filibuster and the codification of Roe v Wade into law. The feeling in the room was angry and energized. Rather than send anyone from Senator Schumer’s office to talk to us, the police were called instead. We continued demonstrating, making it clear we won’t accept any more excuses. Showing the anger of young people in particular at Democratic inaction, 7,750 people tuned in to watch the live stream of the sit-in on TikTok! The demonstration ended with a public discussion about next steps for the movement, including building for an action conference this Saturday.

These are life or death issues for working people and if the Democrats won’t take these steps willingly, then we will have to force their hands. The attacks on the rights, safety, and autonomy of women and LGBTQ people are coming from the right, but we need to be completely clear: The right’s biggest enablers are Democrats in the House, Senate, and White House who refuse to do anything to defend (let alone extend) abortion rights.

They have had 50 years to guarantee abortion rights! Joe Biden ran for president in 2020 promising to codify Roe. Barack Obama did the same in 2007. Both times, they failed to use their majorities in Congress to get it done. Instead, the Democrats, alongside their NGO appendages like NARAL Pro-Choice and Planned Parenthood, have already declared abortion rights dead! They’ve categorically refused to put up a fight despite their majorities in the House, Senate, and seat in the White House. On top of this, we are seeing a national shortage of baby formula which the Democrats are hardly prepared to address. We are reeling from the unspeakable violence against elementary school students in Texas on Tuesday. While efforts are going forward to undermine reproductive rights, our children are not even able to live safely!

The complicity of the Democratic Party in this crisis is perfectly illustrated by the fact that just two days ago, Nancy Pelosi sent out robocalls to voters in Texas asking them to vote for Rep. Henry Cuellar. Cuellar is a right-wing Democrat who opposes abortion and has the support of the NRA. At any time this would be completely unacceptable. At a time when working women and queer people are facing attacks on our bodily autonomy and our children are being gunned down in school, this is a disgrace. The Democrats treat defending abortion rights, and the rights of working families, as nothing more than campaign slogans, but when it’s inconvenient they won’t even go that far.

If the Democrats refuse to take all necessary action to defend abortion rights and instead sit on their hands while the Dobbs ruling is made official, we will need to amp up the pressure with continued direct action ahead of the midterms when the Democrats will likely lose their majorities. We need to take immediate steps towards building a working class political alternative. We need access to safe and free abortion on demand. We need that to be a part of a comprehensive Medicare for All plan that includes gender affirming care for all LGBTQ people who seek it out. Winning all this will require building a mass movement that is independent from the influence of the Democratic Party and challenges the divide and conquer logic of the capitalist system. That’s why we advocate for an independent working class party and the struggle for socialism.

This Saturday, May 28 at 3PM Socialist Alternative NYC will be hosting an action conference at Playwrights Downtown black box room (440 Lafayette Ave in Manhattan) where we’ll be discussing building a fight back if the Democrats allow this decision to go through unchallenged. Join us there to talk about what tactics we can use to build the socialist feminist movement.