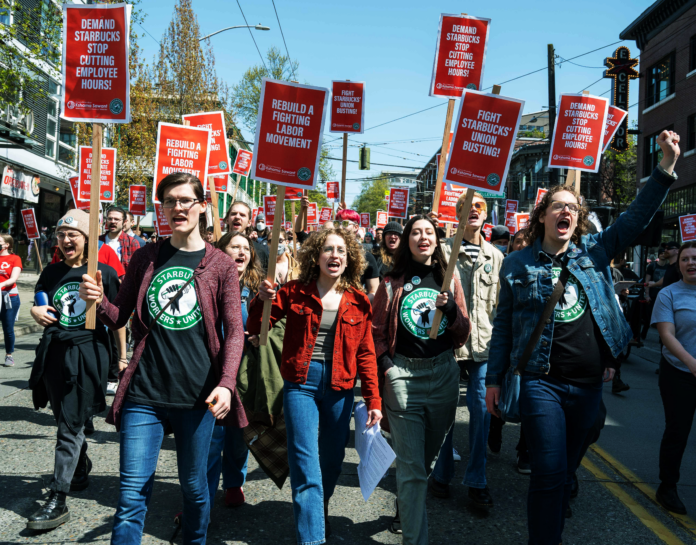 Emilia Morgan is a Watertown, MA Starbucks Barista and a member of Boston Socialist Alternative.

“If I filed an incident report every single time something happened, I would be going to the back every hour,” a Starbucks worker in Boston said about the harassment they face in their store as a barista. Harassment is rampant at Starbucks: practically every barista has some story about a creepy customer, an inappropriate comment, or worse. The story is always accompanied by “my manager did nothing” or “it took months for something to be done.” There is a customer in Boston so notorious for his sexual harassment that he is banned in multiple Starbucks stores across the city. Yet, for months before he was finally banned, managers let him stalk baristas, waiting outside of the store after closing so he could harass them.

Harassment at work, especially in the service industry, is nothing new. As workers, we are subjected to inappropriate comments, unwanted touching, and more from our bosses, clients, and even sometimes other coworkers. This is true across workplaces, especially workplaces where we lack protections.

In service and retail, the mentality of “the customer is always right” is forced upon us by managers and severely exacerbates the bind we are in. In a study from 2021, 66% of restaurant employees reported facing some kind of sexual harassment over the last 6 months. Even at a store like Starbucks, where tips are pooled, we feel compelled to be nice to customers because we rely on tips to make our wage a living one. The study’s author suggests that the fake kindness we are mandated to have “leads customers to experience a heightened sense of power — which can lead them to engage in sexual harassment.”

Starbucks’ image does not tell the full story of the company. While Starbucks corporate celebrates women’s month and calls its employees “partners,” they refuse to give us a living wage and real structures to ensure our safety. Instead, Howard Schultz recently announced he would be giving us NFTs (non-fungible tokens), while he takes home $22 million a year as a salary. Starbucks executives, on average, take home 10 times more a year than a barista working full time. With the intense hour cuts we have faced as retaliation for unionizing, that gap grows more and more.

Managers at our stores are not in a position to take our side in instances of harassment. As both the buffer between workers and corporate, and corporate’s footsoldiers on the ground, managers are forced to protect the company from workers’ grievances while maximizing profits in whatever way they can, or they face being fired or demoted from on high. At Starbucks, customer experience is a central and oppressive metric used by corporate to pressure store management. Every week, managers receive customer survey statistics, and they are constantly urged to ensure that customers continually raise their ratings. Because of this, managers are strongly disincentivized from protecting us over the customer. In the worst cases, and especially when workers lack union protection, managers can engage themselves in harassment, assault, and retaliation for filing reports.

#MeToo and the Labor Movement

The #MeToo movement pushed mainstream media to grapple with the realities working women, queer people, and people of color face. But aside from major headlines and blowback for a few high-profile, famous, and wealthy capitalist men, working people did not see real material gains that changed the level of harassment we face daily.

However, we have seen the expression in the labor movement of the need for working-class women and gender-nonconforming people to fight for our safety on the job. From primarily women of color paraprofessionals fighting for higher wages in Somerville to a rank-and-file group in the historically sexist building trades fighting against sexual harassment on job sites during the Washington carpenters strike, it is clear that people are ready and willing to fight for the protections that we need as workers. Just a few weeks ago in North Carolina, Wendy’s workers went on a week-long strike protesting the sexual harassment and abuse they have faced at the hands of their manager. They wanted management to tackle, head-on, the rampant harassment they face as workers. Lots of coffee workers in Boston echo this exact sentiment, as workplace after workplace files to unionize. It is up to us, as workers, to engage in a militant fight back to win real protections for ourselves and one another on the job.

What a Union Can Provide

Without a union, individual workers are forced to manage their experiences of discrimination, harassment or assault on their own. If they file a claim, their name will be on it. There is nobody in the workplace whose job it is to stand up for the worker. With a union, this vastly changes for individual workers and the workplace as a whole. For example, unionized workplaces have effectively eliminated the gender pay gap with transparent, democratically decided wage scales which are based on how long you’ve worked there, not whether or not the manager gets along with you.

Workers elect union shop stewards in the workplace, and the role of a shop steward is to act as an intermediary between management and workers and represent the workers themselves. The shop steward cannot be fired for bringing forward grievances. Shop stewards can hold the employer accountable to their contract and workers never again have to face the manager on their own.

An active, engaged, and accountable shop steward is crucial for workers to receive the most out of being in a union. For example, a shop steward could hold bi-monthly meetings for workers, with no managers, to talk about conditions in the workplace, and can then approach the manager on an anonymous basis about the grievances workers have. Shop stewards can hold democratic workers’ discussions around sexism, racism, homophobia, transphobia, and other forms of unequal treatment experienced on the shop floor. When workers come together to openly deal with and fight oppression in the workplace, we are actively building the solidarity needed amongst our rank and file coworkers to take on billionaire CEOs like Howard Shultz.

In our contracts, we need to fight against retaliatory firings. Having clauses that stipulate against at-will employment prevents management from firing workers because of complaints around sexual assault and harassment, as well as provides a safety net for workers trying to organize against the harassment and assault they face, whether from customers or even the manager themselves. This is one of the demands that Darwin’s workers in Boston won after a 7-min walkout at the four Darwin’s stores across Cambridge and Somerville. This walkout is an excellent example of the level of militant action needed for workers to win strong contracts based on democratic deliberation among the rank and file.

Canadian Starbucks workers are currently the only unionized Starbucks employee with a contract, and it sets a solid example of the language contracts should include around assault and harassment. However, one step further would be granting democratic power to the workers on the shop floor to stop the sexual harassment and assault we face. What if the contract stipulated that the workers have democratic decision-making power to ban customers who have engaged in harassment and assault? This brings the power back into our hands to create a safe environment for ourselves, whether a manager is willing to help or not.

Winning a contract as workers is not an easy feat, especially when we are up against Starbucks corporate, which has decades of union-busting experience. It will take everything in our arsenal as workers to win a contract with strong demands, including demands about the harassment and assault we face in our workplace. Darwin’s workers set an incredible example of what is needed when our bosses are stalling negotiation and refuse to sit down with us to bargain. Even then, it will likely take more than one walkout to win a contract on our terms. Starbucks has demonstrated time and again that they won’t back down. It will take coordinated escalating action to win what we have democratically decided on. We will have to engage in walkouts, work stoppages, and more to demonstrate to the bosses that we won’t back down from a fight, and that we know what we deserve.

Harassment, violence, and degradation should not be a condition of our jobs. Fighting unions can play the strongest role in protecting us from unwanted treatment. A union gives us the strongest basis to fight against harassment and assault, and our fight shouldn’t stop there. trans-inclusive Medicare for All, abortion rights, and a living wage all play a role in protecting workers, and unionized workers should fight for these things too. The customer is not always right, but until we live in a system that does not prioritize profit over our lives, we will have to fight for the freedom to do our jobs with dignity, safety, and respect.