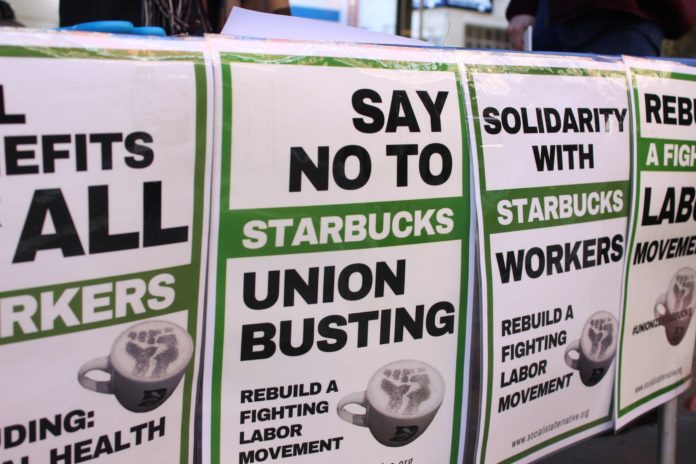 A few weeks ago, I had my first experience of a 2-on-1 union-busting meeting with my manager and district manager at the Starbucks where I work. Because of the precariousness of work in the service industry, meetings like this put workers like me on edge, and put me under pressure to go along with whatever the managers say. Unionizing could give us the job security many of us have never experienced before. But until we win a union, to be told repeatedly to vote “no” by people with the power to fire me is a profoundly intimidating experience.

It is not just my store being forced through these meetings with corporate and management. Starbucks workers across the country are being subjected to intense union-busting tactics including captive audience sessions, intimidating 1-on-1 meetings, and most notably the firing of seven workers in Memphis and a lead organizer in Buffalo.

This response has demonstrated that Starbucks is fundamentally anti-union. As baristas continue to face down the barrel of Starbucks’ union-busting, an important conversation has developed in many stores: how can we respond to corporate’s misleading union-busting arguments?

In Boston, the starting pay for baristas is $15.14 per hour, and it’s even lower in surrounding areas. That’s more than $4 under the living wage here, and in many cities that disparity is even worse! Starbucks workers like me are unionizing so we can afford to stay in our cities, get high quality necessary health-care, and have manageable schedules. We are fighting for things like $20 per hour base pay tied to inflation, regular raises based on time with the company, high quality health care for all, and guaranteed hours with appropriately staffed stores.

The only way workers have ever achieved significant raises or substantial improvements in their benefits is by getting organized. Unionized workers in the U.S. make on average 11.2% more than non-union workers. They are also more likely to have quality healthcare, guaranteed hours, and protections from harassment in the workplace. Our dues will go towards funding a union that is accountable to us and will fight for our interests. With a union, we can win a contract with pay and benefits that far outweigh the cost of union dues. Attempts by Starbucks to convince us we will have less money in our pocket with a union are untruthful.

Starbucks has consistently characterized unions as unnecessary middlemen between managers and baristas. Starbucks management makes it out to be as if the union is a nefarious force working behind the scenes, pretending to act on behalf of workers, but in reality not. This is wrong on every level. A strong union is built out of active, democratic rank-and-file participation. Without the rank-and-file, there is no union. Ordinary workers, not union staffers, have been the ones talking to their co-workers and collecting the union cards. Workers compose the union organizing committees within their workplace. Going forward, if we build a militant rank-and-file membership, we can elect a leadership that is accountable to us. The union is not a third party acting behind the scenes on the behalf of workers – workers ARE the union.

Even once a store unionizes, workers will continue to play the central role within contract negotiations and in all workplace disputes moving forward. As we prepare for a union vote and more, it’s necessary for us to organize regular store-wide meetings to discuss what demands we want to put forward and generally update all workers on how negotiations are going. This is to ensure we go into the contract negotiations on as strong of a footing as possible. We know Starbucks will not back down, so we must be prepared to fight for what we are owed.

It’s true that unionizing alone will not be enough. It’s actually often harder to win a first contract than it is to win a union vote itself. Starbucks will want to fight us on every little detail, and will likely seek ways to delay contract negotiations in hopes that we will concede on our initial demands. If we are going to win a strong contract, it is necessary for us to begin building power on the shop floor among our coworkers. Power in the bargaining room comes from power outside of the bargaining room.

Already, Starbucks workers have begun to show the sorts of class struggle methods that will be necessary for us to win a strong contract. Shortly after winning their union vote, a store in Buffalo went on strike and won paid COVID time off for stores nationwide.

Recently, Starbucks workers in Philadelphia held a sick-out from work to protest against their store lifting its mask mandate, and workers in Denver went on strike in response to Starbucks’ union-busting and cutting hours. Taking concrete actions such as sick-outs, walk-outs, and strikes requires participation from all workers, not just an active few, and ultimately these militant tactics are what is needed to win a strong contract.

Compared to many companies, Starbucks does provide great benefits. This is especially true when it comes to gender-affirming healthcare which is criminally not provided by many employers. But so long as we aren’t unionized, all of these benefits can be taken away from us at any moment. In fact, with corporate cutting our hours nationwide these benefits are already being taken away from us given we only qualify for them if we work a certain amount.

Starbucks, despite its progressive veneer, has the same interests as any other corporation: maximizing profits. Every dollar raise, every healthcare plan, every promise of guaranteed hours cuts into Starbucks’ profits. Unionizing is how we protect our current benefits and prevent Starbucks from rolling them back – like the company did with COVID hazard pay.

In addition, though Starbucks has excellent benefits compared to the rest of the industry, the service industry is infamous for poor working conditions, low pay, and virtually nonexistent benefits for workers. What Starbucks workers have now is better than that, but that bar shouldn’t be left on the floor. With a profit of over $4.2 billion in 2021, Starbucks can afford world-class healthcare benefits to all its workers regardless of hours, and with a union we can win that. Ultimately, the momentum to unionize Starbucks can play a major role in raising the expectations of workers across the industry, and inspire fights at other workplaces.

How We Fight Unjust Firing

Starbucks will continue to fire workers who organize their stores so long as they can get away with it. Retaliatory firing is actually one of Howard Schultz’s favorite union-busting tactics. In the past, retaliatory firings against lead organizers have been a successful tactic for Starbucks to bust union drives because unions that have attempted to organize Starbucks in the past have taken a purely legalistic – rather than shop floor based – approach towards reinstatement.

If the union suspects a worker was fired because of their support for the union, they can go to the NLRB with their case to get them reinstated, but this legal process often takes months – if not years – to conclude. Although workers are often reinstated in the end, as the legal process drags on the union drive tends to lose momentum and fizzles out. It is good and fine for the union’s lawyers to take the issue to court, but this needs to be coupled up with militant tactics on the ground.

Following the retaliatory firings of the Memphis 7, workers at their store have held pickets outside the store and Starbucks workers in cities across the country have held solidarity rallies. This has been a very positive step. Workers need to be prepared to respond to retaliation with a series of escalating actions. In relation to the Memphis 7, Socialist Alternative has suggested we could begin by building for major solidarity rallies, followed by seven-minute walkouts from stores. If those actions are not enough, then workers should seriously consider taking strike action with the demands being the reinstatement of fired workers and an end to Starbucks’ union-busting.

The largely non-unionized service industry is littered with cases of discriminatory firings. We are seen by Starbucks as completely replaceable. Our jobs will never be secure without a strong union. While Starbucks has shown that they are willing to fire workers over union support, we shouldn’t forget that corporations will routinely fire workers over issues like going from full-time to part-time or not fitting the “company’s culture.” Unionizing is our best protection against all forms of discriminatory firings.

In Boston, myself and a group of other Starbucks workers across three stores are drafting a pamphlet in response to Starbucks’ union-busting arguments. Our plan is to use it to counter Starbucks’ lies and explain what we can win through a union. We have found that rallying co-workers around a set of demands that excites them, like higher base pay tied to inflation, guaranteed hours, and high quality healthcare for all, is our best defense against union busting attempts.

While this pamphlet can be a useful tool to educate workers and arm them with counter-arguments against the bosses’ intimidation tactics, we cannot expect that this alone will be enough to defeat Starbucks’ union-busting. For stores preparing to file, or for others who are counting the days till their vote, we must prepare to counter captive audience and intimidating 2-on-1 meetings by organizing our own meetings store by store to discredit the bosses’ lies and build confidence among workers that we can win a union and more. One or two workers in every store doing all of the work is a failing strategy. Providing an organized space for baristas to decide collectively on a course of action to combat union-busting will be crucial to our success.

Corporations like Starbucks are threatened by us organizing and are hoping their anti-union arguments will mislead us to vote “no.” Despite this, the militancy of unionizing Starbucks workers in the face of intense union-busting has been a much-needed shot in the arm for the U.S. labor movement. We must continue to stand up against Starbucks’ union-busting and serve as an example to the rest of the labor movement of how workers can take on massive corporations.