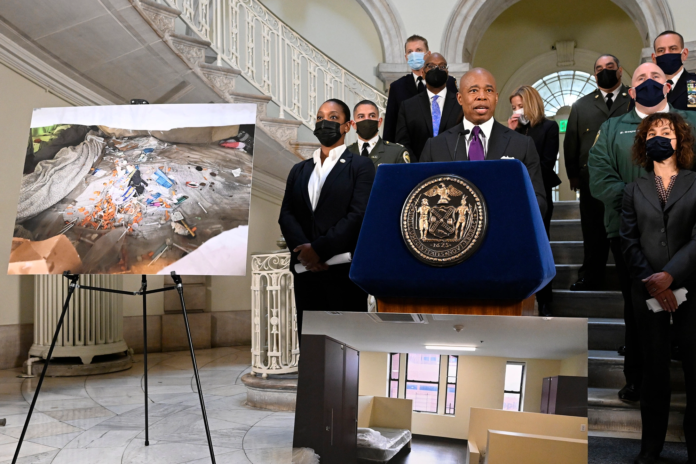 “When the axe came into the forest, the trees looked at its wooden handle and said ‘Oh, it’s one of us.’”

Since the historic events of the Justice for George Floyd movement, one of the core questions facing the capitalist establishment has been how to give the appearance of anti-racist progress to the millions of working-class people and youth seeking change, without actually changing anything.

To serve this need, the post-George Floyd era has given rise to multiple Black mayors who, instead of targeting police brutality and systemic poverty, prey on fears of public safety to exacerbate systemic injustice and police violence.

These local politicians, including Eric Adams in New York City and Bruce Harrell in Seattle, represent the latest iteration of what is sometimes called the “Black Misleadership Class” – Black cultural and political leaders who profess that the way to overcome systemic racism is through respectability and the expansion of the Black middle class, not by overthrowing racist exploitation at its root, the capitalist system.

Though this layer of Black bourgeois collaborationists often blame the Black masses for their current plight (like Obama or Cosby did), it is in actuality the middle class’ “non-struggle leadership” which has resulted in an intransigent wealth gap, inexcusable levels of incarceration, gentrification, displacement, homelessness, unemployment, militarized police occupation and oppression, and skyrocketing rates of gun violence in Black communities.

This class differentiation within the Black population originated at the end of the civil rights movement, following its victory in overthrowing Jim Crow in the South and winning bans on formalized racial discrimination in education, voting, housing and the workplace.

Emerging at the end of the era after the assassinations of revolutionary leaders like Malcolm X, Martin Luther King, Jr, Fred Hampton and the imprisonment of others, reformist civic and political leaders of the civil rights movement forsook mass-movement politics and instead sought to create alliances with the capitalist establishment in order to negotiate reforms.

This rejection of the Black masses as the agents of change paved the way for the transformation of civil rights organizations from organs of struggle and mass movements into apparatuses by, of and for the Black middle class.

Despite being a minority composition in the Black population, thanks to their alliance with and reliance on the capitalist establishment, the Black middle class was able to benefit in wealth, education and connections, allowing them to assume a dominant position within the Black body politic. However, these Black politicians have no interest in the kind of politics that are necessary to eliminate racism and exploitation – revolutionary politics that challenge the capitalist system by democratizing power into the hands of working class Black people.

Instead, these “misleaders” willfully play their part in an elaborate theater upholding the racist, exploitative status quo. Settling for representation and a scintilla of real power rather than liberation, this Black misleadership class plays defense for the ruling class, mollifying eruptions of justified Black anger where possible with vapid excuses and false promises or mercilessly putting it down via state violence when not, like Mayor Lori Lightfoot in Chicago.

For a true multi-racial movement of working people to challenge this racist system of brutal exploitation, we must recognize these misleaders for what they are, identifying them through their allegiance with the ruling class and their repressive actions, rather than mistakenly characterizing them as progressives due to their skin color and professed anti-racism.

The ascendency of New York City’s second Black mayor, Eric Adams, follows the convoluted rhetorical left-populism of Bill de Blasio, who famously campaigned in 2013 to address the “Tale of Two Cities” in NYC. Today, New York is even more unequal, a devastating critique of de Blasio’s reign. Adams’ rise, which should be alarming to the broader segments of the working class, poor, and youth, is rooted in the crisis of big business and the lack of popular support for the institutions of capitalism in New York City. The absence of a coherent left working-class movement, with leadership and organization rooted in our labor movement and communities, is profoundly apparent as working people in the city continue to struggle with the fundamental issues of precarity, lack of jobs, and housing.

In November, Eric Adams ran as a center-right law and order candidate who utilized populist rhetoric and toxic corporate identity politics to win the Mayor’s race. He has governed in the same manner for his first 100 days in office. Adams represents big business’s response to the George Floyd rebellion in 2020 in New York and the overall crisis of capitalism. Adams’s administration is a clear and present danger for the city’s working-class, poor and oppressed.

In recent days, Adams’s administration has announced an austerity temporary budget proposal of $98 billion with significant spending cuts to city agencies, cutting 3,200 vacant city jobs, $615 million in cuts to homeless services, with no cuts to the NYPD and Department of Corrections.

In the face of the mounting headlines of crime, violence in the subways, and the killing of two law enforcement officers, the former NYPD cop Adams has governed with a law and order approach akin to the 20 years of Mayor Rudy Giuliani and Michael Bloomberg’s reign in the city. His administration and big business will not address this crisis concretely and will exacerbate it further. More law enforcement officers will temporarily affect specific communities, but underlining poverty, hopelessness, and survival will not disappear. It is a severe concern for ordinary working people and the poor. This crisis lies at the doorstep of the system of capitalism and the agenda of big business that has put profits before the needs of working people.

Eric Adams vehemently opposed the ‘defund the police’ demand and lent his voice to the national and local charge to ‘refund police’ following the George Floyd rebellion. Adams has met with President Biden and Chicago Mayor Lori Lightfoot to strategize an overall response to the crisis of crime and violence across the country and their respective cities.

The Democratic Party leadership in multiple cities, including Minneapolis, the epicenter of the rebellion in 2020, oversaw the rise of law and order military-style policies alongside deplorable living conditions for the working class, youth, and poor. We should anticipate the same conditions and policies if no grassroots mass movement can provide a political alternative.

In Seattle after the crushing defeat of “woke progressivism” during the November general elections, the political establishment has consolidated its hold on city politics with the elections of conservative Democrat City Councilmember Sara Nelson, the first Republican city attorney in thirty years Ann Davison, and Seattle’s second-ever Black mayor, Bruce Harrell.

Since being in office, Harrell has promoted his vision of a “One Seattle,” with the goal of portraying the neoliberal agenda of continued austerity and pro-big business policies of the Democratic establishment as the only game in town. He was propped up by the endorsement of self-proclaimed progressive Democrats who shamefully unanimously voted to repeal hazard pay for frontline grocery store workers last December.

During his inaugural address, Harrell stated that his “One Seattle” vision is one that would prioritize public safety, homelessness, and “revitalizing” the Downtown area which has been hit hard with the economic impacts of the pandemic and rising unaffordability. In truth, this means supporting the business elite instead of working people and the poor who have borne the brunt of these economic impacts. He plans to hire more police officers and will likely reinstate hiring and retention bonuses for the Seattle Police Department, one of the most right-wing departments in the country which had the largest contingent in the January 6, 2021 attempted coup.

His promises to address homelessness are nothing but empty words. He has not released any plan to address the severe lack of affordable housing or the skyrocketing rents that are absolutely crushing working people in a city where rental prices jumped nearly 30% in the last year.

Harrell’s agenda is similar to that of Lori Lightfoot in Chicago, Eric Adams in New York City, and London Breed in San Francisco. They represent an ardent neoliberal agenda that targets working-class communities, especially Black and Brown communities, by slashing public resources and promoting a corporate agenda which has led to further degradation of living standards for workers. Their identity is cynically weaponized to sow illusions in their ability to address the issues facing Black communities.

Their role, and that of the Democratic Party more broadly, is to sideline progressive and socialist voices and undermine mass movements. “One Seattle” projects a vision of unity, but it’s unity around the establishment and capitalist forces and obfuscates the reality that big business and the establishment have waged a brutal war against working people and the poor.

To address public safety and the recent uptick in crime in Seattle, we need a massive investment in public resources like living wage paying union jobs and fully funding public schools paid for taxing the rich. The only solution to the homelessness and crisis is a massive expansion of the Amazon Tax to fund permanently affordable housing and pay for mental health and addiction services. Seattle needs strong rent control with no corporate loopholes to stop greedy landlords from gentrifying our neighborhoods, especially the historical Black Central District which has seen an over 50% decrease in Black residents in the past 50 years due to corporate landlords and developers. We cannot have any faith in the Democrats or the political establishment and we need to build a multi-racial mass movement of renters, workers, housing advocates, and socialists to pressure the political establishment to wrestle these gains from big business and the corporate elite.