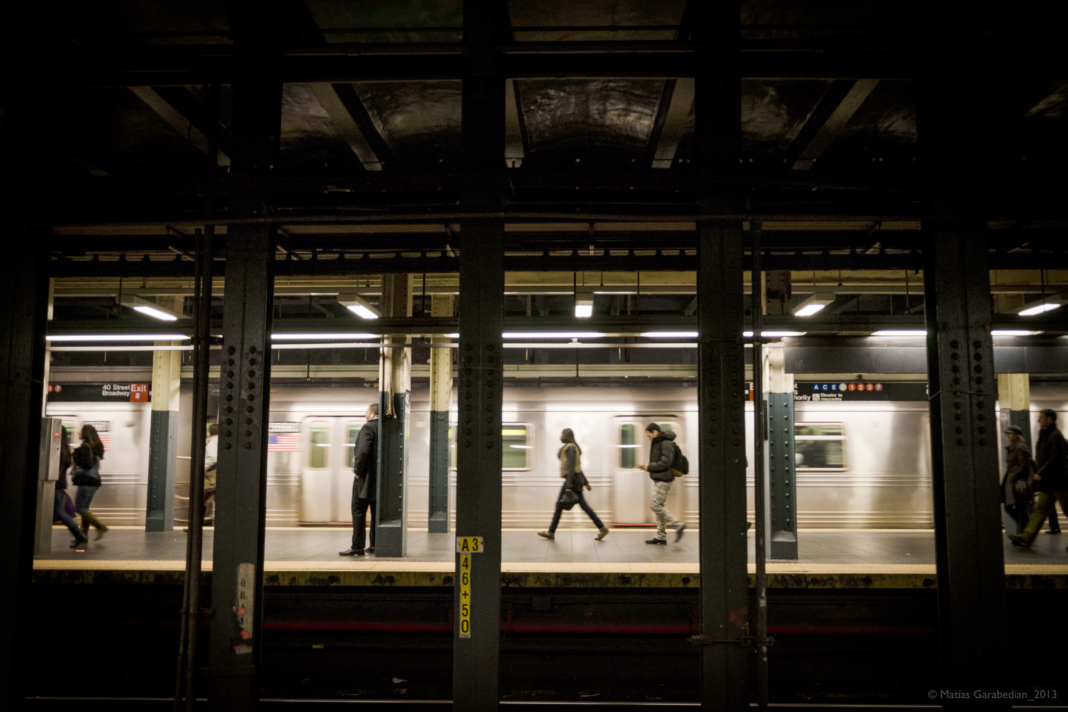 In the early morning rush hour of April 12, working people in New York City and around the country were in disbelief at the unconscionable violence and mass shooting by Frank James on the N train coming from Brooklyn into Manhattan. The attack resulted in twenty-nine people injured. Ten riders were shot, several inhaled smoke from the smoke bomb set off before the shooting, and others suffered falls and panic attacks in the chaos. The attack took place in Sunset Park which has the largest Asian community in Brooklyn. While James’ motivation does not appear to have been to attack Asian Americans, this comes on the heels of an increase of anti-Asian violence in the city. In 2021 there were 131 hate crimes targeting Asian workers and youth punctuated by the tragic killing of Michelle Go, shoved onto the train tracks on January 15.

This senseless act of indiscriminate violence and terror by Frank James occurs at a crucial moment in NYC politics, with a city still attempting to rebound from the effects of COVID-19, rising crime rates, a weak economy, and as Eric Adams, the second Black mayor in NYC has taken office. Adams, a former NYPD law enforcement captain, has ushered in a “law and order” doctrine and pro-big business agenda to “combat crime” while doing nothing to address the gravest social ills plaguing working people. These acts of violence bring the crisis facing working people, the poor, and the most vulnerable under capitalist oppression, exploitation, and social alienation under the spotlight.

The Troubled Life of Frank James

Throughout Frank James’ adult life, he has been arrested several times on misdemeanors, tampering, and countless other charges. James, a 62 year-old Black man, railed against Eric Adams and the city’s homeless shelters which he frequently occupied. His Youtube channel and Facebook page, now taken down, spewed some of the most hateful language towards, Black people, Latinos, and LGBTQIA people, in addition to antisemitic rhetoric. He stated that he suffers from Post Traumatic Stress Disorder (PTSD) and has not spoken to his family in several years. He has talked of a coming race war in the United States, and argued that Black and white people should not intermingle with each other.

Frank James’ story is not an uncommon one in U.S. society. It is a symptom of a society that is steeped in polarization and racism, prioritizes wealth and power for a tiny elite over the well-being of the majority of working people, and acts as a pressure cooker for disillusioned individuals resorting to violent acts against fellow working people.

It has been speculated particularly by the right wing media that Frank James is a Black nationalist. Black nationalism has a long and complex political history in the struggle against capitalism and racial oppression in the U.S. and globally.

What is Black Nationalism?

The ideas of Black nationalism date back to the 19th and early 20th centuries, rooted in the rejection of slavery, racial subjugation under white supremacy, and the compromise of 1850 and the Fugitive Slave Act. The ideas of Black nationalism advance the right of self-determination of an oppressed people, fermenting a call for greater racial unity to bring black workers and youth together to forge a common destiny and program for their liberation. Throughout the long arc of the Black freedom struggle, however, the main tenet of the struggle has not been nationalism but rather has been centered around ending segregation, racial oppression and economic exploitation under capitalism fighting for genuine equality, economic, and racial justice.

Black nationalism has various strands of thought and activity from cultural nationalism, revolutionary nationalism, and Black economic nationalism. Black nationalism’s most notable figures like Edward Wilmont Blyden, Martin R. Delaney, Marcus Garvey, Elijah Muhammad’s Nation of Islam, and many others would profoundly affect the consciousness of radicalizing Black workers and youth in the country’s urban centers. In times of retreat and defeat of the multi-racial working class struggle and labor movement throughout the 20th century, we witness the ascendancy of Black nationalism among Black workers and youth as they seek a pathway to ending daily oppression and racial violence. The dominant trend of Black nationalism we are witnessing today is a return of conservative Black capitalism and entrepreneurship in this period of law enforcement terror and racial polarization.

Capitalism is a system rooted in the massive accumulation of profits and resources for a tiny ruling elite in society like Jeff Bezos and Elon Musk that dictate the direction of society that will protect and advance their power, wealth, and prestige in society. Black capitalism is not a solution to the crisis Black workers and youth face under the crisis of global capitalism at home and abroad. It will do nothing to address the state of precarity and economic despair as we are witnessing today.

During his candidacy and subsequent victory, Mayor Adams made it clear that the social movements against racial oppression and law enforcement violence, the movement demand to defund the police, and the political left in the city were his enemy.

This charge of Frank James being a Black nationalist by right-wing news outlets and pundits based on his statements and now defunct YouTube channel should be examined. Frank James’s actions highlight the deeper levels of crisis around mental and emotional health, the criminally neglectful response by government officials and institutions to this crisis is abhorrent. It seems from all published reports Frank James acted alone and doesn’t represent the dominant trend of Black capitalism or Black nationalist organization in existence today. Undoubtedly most of them would find his actions abhorrent.

In contrast, the forces of the right-wing and far-right white nationalist have supported, defended, and economically sustained white vigilante violence shooters like Kyle Rittenhouse during the Trump era as a counterweight to the Black Lives Matter struggle against law enforcement terror and endemic racism. Their acts without doubt represent the ideas of the forces of reactionary white nationalism and hate in society that must be confronted through social struggle and a united multi-racial working class movement.

The Response by Big Business and Political Establishment

As revolutionary Marxist and working-class activists, we oppose the heinous actions of Frank James as despicable and reactionary acts of indiscriminate violence and terror. But, how we respond to this event should be rooted in tackling the fundamental issues affecting New York City that brought terror on the N train.

Democratic President Biden, Governor Hochul, and Mayor Eric Adams have decried the actions of Frank James and vowed to combat the crisis. Thus far, the response has been to put more law enforcement officers on the streets and train stations and make a more significant investment in surveillance that failed on that fateful morning.

In the face of the mounting headlines of crime, violence in the subways, and the killing of two law enforcement officers, the former NYPD cop Adams has governed with a law and order approach that harkens back to the 20 years of Mayor Rudy Giuliani and Michael Bloomberg’s reign in the city. His administration and big business will not address this crisis concretely and will exacerbate it further. More law enforcement officers will temporarily affect specific communities, but underlining poverty, hopelessness, and survival will not disappear. It is a severe concern for ordinary working people and the poor. This crisis lies at the doorstep of the system of capitalism and the agenda of big business that has put profits before the needs of working people.

In fact, Adams has been banging the drum of more law enforcement since taking office. There are 3,500 law enforcement officers that patrol the subways currently that could have foiled Frank James plans. What we have witnessed is the pursuit of “ quality of life” crimes which are really crimes of poverty and precarity like transit fare evaders, immigrant working-people selling food and getting the homeless off the trains and out of the stations. Adams is looking to increase law enforcement in the subways by several thousand as he continues his corporate agenda to re-open the city after the effects of COVID-19 on the New York economy, especially tourism. Big business is eager to maximize their profit margin in this period of global economic instability.

The NYC transit system is the oldest in the country, dating back to 1904 and one of the most expansive systems in the world. It has 10,000 surveillance cameras in 472 train stations that should be routinely checked and monitored. On April 12 the cameras in the station weren’t working at all. An investigation conducted by CBS, however, says officials were repeatedly warned over the last five years that the cameras were at risk of malfunctioning. This speaks to the priorities of this system and its institutions that would allow the public safety of working people to be jeopardized by their unquenchable thirst for profits. It is clear that the transit system needs a full investment of repairs and upgrades to the camera system and not more law enforcement officers.

Mayor Adams’s administration originally announced an austerity temporary budget proposal of $98 billion in February with significant spending cuts to city agencies, cutting 3,200 vacant city jobs, $615 million in cuts to homeless services, with no cuts to the NYPD and Department of Corrections. On April 26th, Adams announced a newly proposed $100 billion operating budget for NYC that has increases for social programs, homeless shelters, and education. Clearly, the response by working people, activists, council members and segments of big business had an effect on Adams despite there being increases for the Department of Corrections hiring 500 new corrections officers and adding $182 million for the NYPD bringing their budget to $5.6 billion.

Building social movements led by multiracial working people rooted in a social struggle approach highlighting winnable demands for jobs, healthcare, housing, and mental health services, challenging the corporate agenda is crucial to deal with this crisis effectively. If we don’t fight back against this illogical and dastardly capitalist system, we could see more events like April 12.