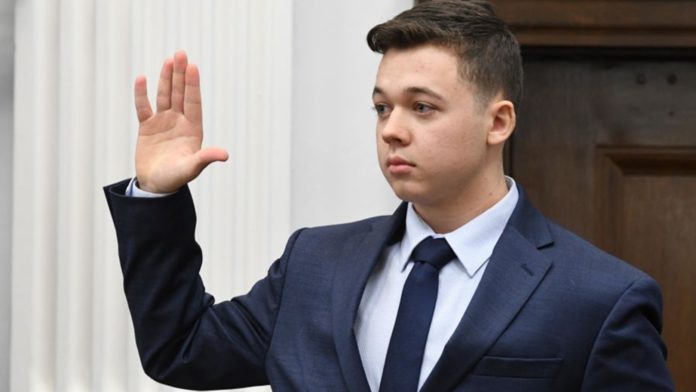 Update: Kyle Rittenhouse was found not guilty on all charges on Friday. This complete travesty is a gift to the far right and will embolden right wing vigilantes to attack future protests. The question, as our article written during the trial explains, is not whether Rittenhouse had any reason to believe his safety was in danger, but why he was there in the first place with an assault rifle. Who sent him on this mission? Who instigated this vigilante violence? Trump, Fox News and the rest should also be held responsible for the deaths of Joseph Rosenblum and Anthony Huber. Along with anti-protest laws being passed in Republican- run states, the goal of the right is to terrorize and suppress dissent.

The verdict underlines, as socialist Seattle councilmember Kshama Sawant, stated immediately afterwards that “all of capitalism’s institutions are complicit in this racist system that’s exploitative of the vast majority.” In contrast, Joe Biden’s pathetic response after this farce of a trial was: “The jury system works, and we have to abide by it.” This shows yet again why we can’t in any way rely on the Democratic Party which oversees the racist criminal justice system in city after city and state after state and need to build a sustained mass movement independent of all corporate influence to end racism and capitalist oppression.

Since the re-emergence of the Black Lives Matter movement just over a year ago, millions of people internationally have stood shoulder to shoulder in the fight against the police brutality and racial injustice produced by capitalism. Currently, far-right vigilante Kyle Rittenhouse is standing trial for killing and wounding Black Lives Matter protesters in Kenosha, WI.

The protests broke out in response to a brutal police shooting that left Kenosha resident Jacob Blake permanently paralyzed. The protests were immediately met with force and repression from the National Guard. Confrontations between protestors and the police and images of burnt businesses were seized on by right-wing commentators as “proof” that the Black Lives Matter movement was full of violent rioters. While there were some instances of protestors in Kenosha using anti-social tactics, which we’ve repeatedly written are broadly ineffective, the Black Lives Matter movement was overwhelmingly peaceful even according to the capitalist press. The right wing however had a very different narrative to spin. They wanted to use the unrest in Kenosha, which was broadly provoked by state forces themselves, to prove the violent nature of BLM and used it as a call to arms for right-wing fanatics across the country. Kyle Rittenhouse met this call.

Now, many who came out into the streets to demand justice for Jacob Blake are closely watching the Rittenhouse trial, hoping the courts deliver justice and deal a blow to the threat of the far-right. Media coverage of this trial has focused heavily on calculating whether or not Rittenhouse was justified in shooting three protestors, however this is a very narrow fixation. This trial represents more than just an ethical concern about self-defense. It represents first and foremost the immense polarization in society, and the wider political campaign by the right-wing and the court system to dissipate the momentum generated by working people during the height of the BLM protests.

Courts Won’t Save Us

The capitalist legal system is never favorable terrain for winning the demands of working people, and this trial is no exception. Before the trial even began, Judge Bruce Schroeder ruled that the protesters Rittenhouse shot cannot be referred to as “victims” and should instead be referred to as “looters” and “rioters.” During the proceedings, not only has Schroeder made unprofessional and racist comments towards Asian people, but he has already paved the way for the jury to clear Rittenhouse of his firearm possession charge.

Even the prosecution, led by Kenosha District Attorney Thomas Binger, represents a major barrier to achieving justice through the court system in this case. Binger has a close relationship with the Kenosha PD and has historically safeguarded Kenosha police from accountability for police brutality. Not only did Binger’s office argue that police were justified in shooting Jacob Blake 7 times in the back, but following the execution of Michael Bell in 2004 by four Kenosha police officers, the Kenosha District Attorney’s office refused to take the case to court. After allowing the Kenosha PD to change their story nineteen times, the case was settled out of court. The trial has revealed the unwillingness of the prosecution to seriously pursue justice here.  In an almost absurd display of just how undemocratic this trial has been, Rittenhouse himself was allowed to select the 12 final jurors in the case from a raffle. It is abundantly clear that this court is wholly hostile to the Black Lives Matter movement and the struggle for justice is being fought on the home turf of the right-wing.

The accommodations that have been made for Rittenhouse stand in devastating contrast to the death sentence delivered to Philando Castille in Minnesota for disclosing to police that he had a gun during a routine traffic stop, or Trayvon Martin for walking down the street unarmed, or Ahmaud Arbery who was executed by three white men who are now standing trial for his murder.

How To Defeat the Right?

We will not beat back the growing far-right through relying on the courts and police, both of whom act on behalf of the capitalist class. Instead, we need to rapidly develop the forces and authority of the left by building movements of workers and young people who are still looking for ways to win the demands of the Black Lives Matter movement, like reducing police budgets, spending on social services, and community control over the police. It is not enough to point out the wickedness of individuals like Kyle Rittenhouse, we need to take on the broader forces and individuals furiously whipping up racist, right-wing rhetoric. Figures like Donald Trump, Tucker Carlson, and Ben Shapiro.

Building a movement to stop the far-right is going to have to be centered around the collective strength of working and young people. A significant threat the far-right poses to working people, as seen in Kenosha over a year ago, is their use of terrorism and violence on the ground. Not only can far-right terror cause disarray and trauma among organized protests, but it also demobilizes people who would otherwise participate. With this in mind, working people should organize with their communities to enact safety measures to ensure that future BLM protests are protected. Beyond concerns of protection, defeating the far-right cannot go without a call by the broad working class, including and especially the labor movement, for a new workers’ party whose elected leaders are directly accountable to its constituents. Building up the broad forces of the left and a new party separate from the two corporate parties will give working people a visible fighting force that stands unequivocally with movements like BLM.

Socialist Alternative stands in solidarity with those who have taken to the streets in Kenosha and beyond to continue the fight for racial justice. Moving forward, BLM protests need to take on a far more organized character with democratic organization and a clear political program. Among other demands to put an end to racist police brutality (purging police forces of anyone with a history of racism, sexism, or violence, disarming cops on patrol, etc.), part of this program should include the creation of a democratically elected control board with complete authority over the police department to hire and fire, set policy, and subpoena. It also needs to take up broader demands to improve the lives of the multi-racial working class, like Medicare for All, free, high-quality affordable housing, and a Green New Deal.

It was the exploitative, oppressive, and unjust system of capitalism that brutalized Jacob Blake. While a mass movement centered on the working class can force some reforms to the broken “criminal justice” system,, on a basic level racially just policing is impossible under a social system based on exploitation and systemic racism. Ultimately we can build a new socialist system on the basis of human need and genuine justice for the oppressed.