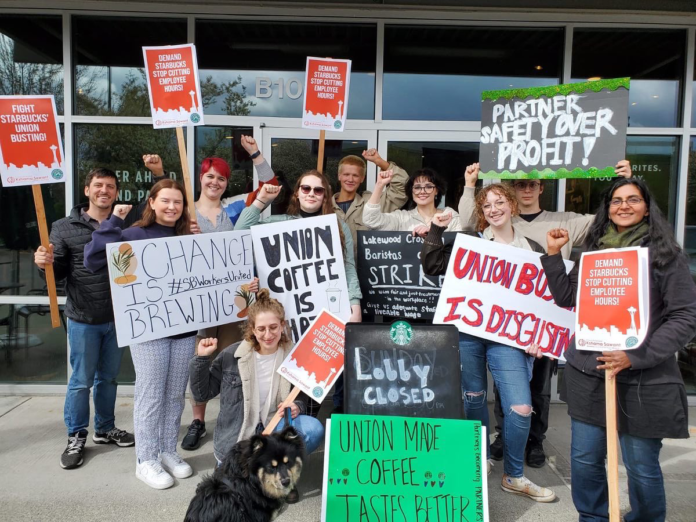 “There should be a national walkout day, where no Starbucks is open.”

This past weekend, unionizing workers at a Starbucks store in Marysville, WA went on strike for three consecutive days, forcing management to shut down the store! As they picketed outside the store, they explained their demands, including an inflation-adjusted living wage, full staffing, free healthcare, and an immediate end to threats, intimidation, and union-busting. The baristas had just started signing union cards when they began their strike on April 8, and by the end of the strike on April 10, they announced that 70% of the 22 workers at their store had signed. Councilmember Kshama Sawant and her office, along with Socialist Alternative and Democratic Socialists of America members, joined in solidarity.

One of the workers, who had continued working despite the strike in the first days, was convinced to put down their apron by the third day, and helped make possible a complete shutdown of the store. In just three days, the workers alerted thousands of people to the terrible working conditions at their store, and built strong support among customers and co-workers. By organizing an energetic and successful strike, with chants, picketing, and concrete demands, they demonstrated that it is workers, not management, who produce the billions of dollars in profits for companies like Starbucks, and that workers have the power to bring those profits to a grinding halt.

Workers at this Starbucks store, known as Lakewood Crossing, have endured severe and chronic understaffing. They are forced to work at times more than 10 hours without legally-mandated breaks, yet are expected to maintain performance standards that under such circumstances become physically impossible. They are working through their second rat infestation in less than a year, because understaffing means that workers, despite working overtime, are still unable to complete crucial cleaning tasks. Starbucks executives and management have started using the same union-busting attacks here that have been reported across the country, including hours cuts, threats, and intimidation. The average wage at this Starbucks store is $15/hour, which puts many of these workers solidly below the poverty line—one of the workers at this store has experienced homelessness while being employed by Starbucks. As one worker put it, “There’s money to give Starbucks CEO Kevin Johnson a 40% raise, but the baristas at our store can’t pay rent. Where’s our raise?”

The day before the strike, after a shift where two baristas were forced to run the entire store on their own for over six hours—one of them nine months pregnant and the other on a 10.5-hour shift with no breaks—the workers said enough was enough.

“It came together pretty much overnight,” said Katelyn McCoy, one of the lead strike organizers and a barista at the store. “We closed the store, made it look nice and pretty, and walked out.”

They made signs, typed up a list of demands, and came back the next day to shut down the store. Like many of their fellow Starbucks workers across the country, most of the workers at this store are young, some of them 18 years old, many already working full-time to support their families financially on top of going to school. For the first time in their lives—and likely not the last—they walked off the job to fight for a union and for better lives for themselves and their coworkers. Their demands included a living wage tied to inflation, consistent scheduling, full staffing, seniority pay, 12-weeks paid maternity leave, credit/debit card tipping, revisions to barista training, and for Starbucks to follow all labor laws.

How Workers Escalated and Shut Down Their Store

Because the action came together so quickly, few people outside of the workers at the store knew about the strike on the first day. So it was crucial that they reached out to unionizing Starbucks workers in nearby Seattle, who in turn connected them with Councilmember Kshama Sawant’s office. Councilmember Sawant and her office, and Socialist Alternative, have publicly stood in solidarity with unionizing Starbucks and Amazon workers. Alongside workers, we brought forward a resolution in January demanding Starbucks bosses end their union busting, and forced the Seattle City Council Democrats to unanimously vote in favor of it. In March, Councilmember Sawant and our office joined Starbucks workers at Cooper Point in Olympia, WA, at their successful one-day strike.

Four of us, including Councilmember Sawant and another member of Socialist Alternative, immediately drove up to Marysville to support the strike on Day 1. The energy was high as we marched all together around the store, waving picket signs and chanting through a megaphone: “Starbucks, get off it, put workers over profit!”

Organizers from Councilmember Sawant’s office and members of Socialist Alternative were out in Marysville standing in solidarity alongside the striking workers for all three days of the strike. After the first day, Members from Snohomish County DSA and Seattle DSA also joined us after the workers and our office put out a call for community members to join the picket line and support the strike.

In one of the most exciting developments to take place during the strike, two Starbucks workers from a unionizing Starbucks store in Everett, WA came to the strike to lend support and solidarity, and to thank the Marysville workers for their inspiring actions. The Everett workers expressed that people at their store had become a bit demoralized, because after more than 30 days since filing for a union election, they were still waiting for their election date from the National Labor Relations Board. But the strike in Marysville had boosted their morale and inspired them to keep fighting. On Day 3 of the strike, workers from the Lakewood Crossing store left the picket line and drove 20 minutes to the Everett store, to meet the other workers and discuss the lessons of their strike.

On the first two days of the strike, management attempted to break the strike by keeping the drive-thru open, although they were forced to close the lobby. To push back against this, striking workers and members of Socialist Alternative positioned themselves at the entrance and exit of the drive-thru to wave down approaching cars, explaining why they were on strike and appealing to customers not to cross their picket line. On Day 2, workers convinced nearly two dozen cars to turn around in solidarity with their strike, and were able to cause significant delays in management’s ability to keep the drive-thru running. Many supportive customers stayed parked in the entrance to the drive-thru for several minutes while workers explained the situation at the store, causing major backups of cars that wove around the building. The customers who did not cross the picket line, most of them fellow working people including many union members, urged the striking baristas to keep fighting.

To keep the store running during the strike, Starbucks executives sent in regional Starbucks managers who were forced to run the store on their own. The managers used deliberate tactics in an attempt to divide the striking workers from the workers who supported the strike but so desperately needed the income that they felt they had no choice but to keep working. In response, the striking workers spent time on and off the picket line talking to their co-workers, listening to their concerns and explaining that the strike was not solely for the workers on strike, but for all of the workers at their store who were being forced to endure miserable, exploitative conditions. They were fighting for everyone.

Each day, the number of baristas on strike grew. By the third day they had won over many of their coworkers, and management had no one left to run the store. Two days of energetic picketing and the workers’ success in convincing customers to turn away was not something management was willing to risk for a third day, so management shut down the store entirely on Day 3. By the end of Day 3, Sunday, the organizing committee at the store had signed up over 70% of their coworkers on union cards and filed for a union election. They walked back into work on Monday with a union, albeit one not yet recognized by the company.

This courageous strike by Starbucks workers in Marysville echoes the Olympia strike last month and the successful strike earlier this year by workers in Buffalo, NY, who won paid COVID leave for workers company-wide. It’s no coincidence that, as Starbucks workers on opposite sides of the country were going on strike for the first time, Amazon workers at a warehouse in Staten Island won the first-ever Amazon union in the United States. Workers across every industry are increasingly ready to fight, and Starbucks workers are on the forefront of an all-out battle against the billionaires and the wealthiest corporations on the planet. Starbucks executives’ union-busting onslaught will only intensify—indicated most recently by their increasingly blatant anti-union firings and billionaire CEO Howard Schultz’s statement that the company is being “assaulted” by threats of unionization.

Workers across the United States are beginning to conclude that the only way to truly fight back against massive corporations owned by billionaires and multimillionaires is by escalating, organizing strikes and walkouts, and mobilizing as many working people and community members as possible around concrete workplace demands. Facing vicious union busting from the company, workers at Lakewood Crossing and beyond are looking for ways to escalate the fight.

“I definitely think that a national day of strike [is needed], where [we] show Howard Schultz… hey, we’re serious… We want a livable wage and we want to be treated fairly,” said McCoy. Her fellow strike organizer and barista at the Lakewood Crossing store, Lincoln Wheeler, agreed: “There should be a national walkout day, where no Starbucks is open.”

Workers at Marysville, Olympia, and Everett are now mobilizing their co-workers and friends to the “Fight Starbucks Union Busting” rally in Seattle on April 23 that is being organized by Seattle Starbucks workers, union members, and Councilmember Sawant’s office. They are also gathering petition signatures to demand the immediate rehiring of all unjustly fired unionizing Starbucks workers. The April 23 rally will be joined by Starbucks workers Laila Dalton and Alyssa Sanchez from Phoenix, AZ, and members of the Memphis 7, all of whom were illegally fired by Starbucks for unionizing. If you’re near Seattle on April 23, we hope you’ll join us!