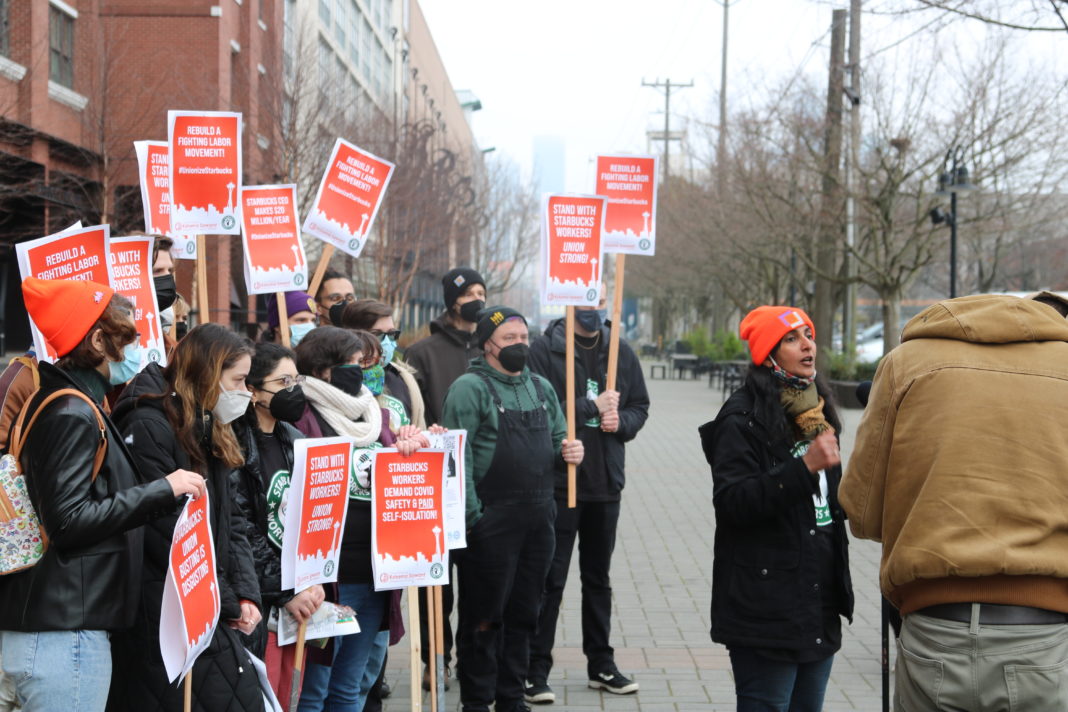 Bia Lacombe is a member of Socialist Alternative and a community organizer in the office of Socialist Councilmember Kshama Sawant.

Starbucks workers recently launched a nationwide union drive. Workers in two stores in Buffalo, New York, have already won their union election, and workers in nearly 80 other stores also have announced their plans. If Starbucks workers succeed in building a union — and not only building a union, but winning a fair contract — it will be unprecedented in the service and fast food industries, the kind of mass unionization unseen on this scale in almost a century. It’s the responsibility of the left and the labor movement to do everything in our power to help this union drive succeed.

Last week, Councilmember Kshama Sawant and our Marxist council office, alongside Starbucks workers, local unions, and community supporters, succeeded in passing a resolution on the Seattle City Council that calls for an end to the company’s vicious and well-funded union-busting campaign. Winning this resolution required workers and socialists getting organized and putting a spotlight on the empty words of Democratic politicians, who will go to great lengths to say they are pro-worker and pro-union, but who will only vote with workers when forced to by the pressure of our movements.

In mid-January, Councilmember Sawant met with the Seattle Starbucks workers who had filed for a union election to discuss how our office could support their effort. We suggested putting forward a resolution to the Seattle City Council, in solidarity with the unionizing workers and demanding an end to Starbucks’ union busting. The workers were extremely excited, and drafted the resolution with our office.

We held a press conference right in front of Starbucks headquarters in Seattle, which made it clear that we were bringing this fight directly to the executives. Starbucks workers from Seattle and Buffalo spoke about the exploitative conditions at their stores that were driving them to unionize. They shared stories of the insidious union busting that workers had already experienced, and urged that the eight other Seattle City Councilmembers (all Democrats) stand with them.

Gianna Reeve, one of the Buffalo Starbucks workers, spoke to the necessity of this resolution and a nationwide solidarity effort, saying “We need to stand together… We need to be here to demand this resolution. [Starbucks] will do exactly what they did in Buffalo, where they are closing stores, threatening partner benefits — they will do this anywhere. They take pride in Seattle being their hometown, but they will absolutely rake their partners through the mud unless we tell them NO. So let’s do it. We cannot stand for this anymore.”

The message to the Democrats was clear: in the city where Starbucks was founded, where billionaire former CEO Howard Schultz resides, elected officials have an even greater responsibility to condemn the company’s union busting and stand with the workers.

The message to Democrats was clear: in the city where Starbucks was founded, where billionaire former CEO Howard Schultz resides, elected officials have an even greater responsibility to condemn the company’s union busting and stand with workers.

With support for unions higher than it has been since 1965 — 68% of workers now say they want a union — we know that working people are looking to do more than donate and put “Union Strong” on their coffee order, though these things are also important. This excitement is evidenced by the enormous support we saw in response to our tables outside Starbucks stores. In just a few days, we gathered hundreds of signatures on our petition demanding the City Council vote yes on our resolution. More than once, someone rushing past us would hear the words “Starbucks” and “union” and turn around, grabbing the clipboard to sign in support. Nearly 200 people turned out for our rally with Starbucks workers despite a wet and freezing Seattle evening.

Councilmember Sawant takes the average worker’s wage, and after taxes, donates the rest of her six-figure City Councilmember salary (over $140,000) to a solidarity fund to support worker organizing and social movements. The solidarity fund was used to donate $1,000 to the Starbucks Workers United GoFundMe for the striking workers in Buffalo, who won the colossal victory of paid self-isolation for all Starbucks employees in the event of COVID exposure. Through the solidarity fund, Sawant has also offered $10,000 to help build the nationwide union drive. I believe progressive and socialist representatives everywhere should similarly pledge to take home the average worker’s wage, and most importantly, boldly use their elected positions to build energizing actions and expose the empty words of woke progressivism of the Democratic Party.

Socialist Alternative and Sawant — who is also a member of the Democratic Socialists of America (DSA) — are urging unions and DSA elected officials across the country to bring forward their own resolutions. It is the responsibility of socialist elected representatives to demonstrate a class struggle approach in action and show workers that we have their backs.

Chicago Alderman and DSA elected representative Byron Sigcho-Lopez immediately joined us, and announced that he would bring a resolution for a vote by the Chicago City Council. Minneapolis City Councilmember and DSA member Robin Wonsley Worlobah has announced plans to do the same. Sawant, Sigcho-Lopez, and Wonsley Worlobah held a tri-city press conference alongside Starbucks workers from Seattle and Chicago.

Kshama Sawant is the lone Marxist on a City Council that has eight Democrats. While the self-proclaimed progressive Democrats may speak in support of workers and unions, they try to pretend they can side with both workers and the bosses. But in a system like capitalism, where the deck is overwhelmingly stacked against working people, declining to take a clear side means maintaining the status quo, and that means siding with the billionaires while working people suffer. As the only office that consistently and unapologetically stands with the working class, we see it as our responsibility to make the Democrats choose a side, out in the open. Either they will be forced by the pressure of our movements to vote for what working people need, or they will be exposed as politicians doing the bidding of the bosses.

We said again and again that this resolution was very simple: Democrats could either stand with Starbucks workers courageously fighting for better conditions, or they could stand with the union-busting bosses. Of course, some Councilmembers still attempted to have it both ways — to say during the Council meeting that they were “pro-worker and pro-union,” but that they felt the resolution was “outside City business” and therefore they would be abstaining from voting on it. Councilmember Sara Nelson, whose election campaign was funded and supported by big business and Seattle’s wealthy, recognized the incoherence of her own position, going so far as to say, “I can’t vote yes on this… but I also don’t want to have a vote that could be misunderstood as anti-worker on my record, so I am going to withhold my vote on this resolution.”

Councilmember Alex Pedersen also abstained, claiming that the resolution did not address homelessness and crime in the city, despite also saying, “I absolutely support the right of workers to organize.” Yet, in 2020, when the Tax Amazon movement fought alongside Councilmember Sawant’s office to bring the historic Amazon Tax legislation to City Hall to fund affordable housing, Pedersen voted no. Councilmember Juarez, who also voted against the Amazon Tax, said during the debate on the Starbucks resolution that she hoped “we can all agree to disagree, that there isn’t a right or wrong, that we can all respect each other’s opinion.”

But there is a right and wrong. Political actions by elected officials are not neutral in the context of the capitalist system’s deep and crushing inequality. The Democrats can say whatever they’d like about being pro-labor, but by abstaining on the resolution they have chosen a side — the side of Starbucks executives who just this week blatantly violated labor law by firing seven members of the union organizing committee in a Memphis, Tennessee, Starbucks store. In fact, not one of the eight Seattle Democrats, in a county named after Martin Luther King Jr., has spoken up in support of the workers who have been fired in the city where MLK was murdered while defending the right of sanitation workers to form a union.

In fact, not one of the eight Seattle Democrats, in a county named after Martin Luther King Jr., has spoken up in support of the workers who have been fired in the city where MLK was murdered while defending the right of sanitation workers to form a union.

We hardly have to go back more than three months to demonstrate even more blatant betrayals of working people by Seattle’s Democratic Councilmembers. In December, all eight of them shamelessly voted to end the city’s $4/hour pandemic hazard pay for grocery workers, just as Omicron was surging. The bill to end hazard pay was brought forward by none other than “champion of labor” Councilmember Teresa Mosqueda, at the same time that she and all City officials still continue work from the safety of their homes via Zoom meetings, with six-figure salaries. Grocery workers have been among the frontline workers at major risk of exposure to COVID, and have been struggling to make ends meet, while Kroger bosses have amassed enormous profits.

In Seattle, our working-class movement has beaten Amazon and Starbucks and Seattle’s wealthiest corporate landlords again and again, not by trying to convince them or the Democratic politicians to be kind, but by getting organized and fighting back. That is how we won this resolution in solidarity with Starbucks workers in Seattle, which is the first of its kind in the nation. That is why we have proposed to Starbucks workers that we have a national day of action. We are also helping to organize job defense rallies in support of the workers Starbucks has fired. As we know from the labor movement’s history, an injury to one is an injury to all.