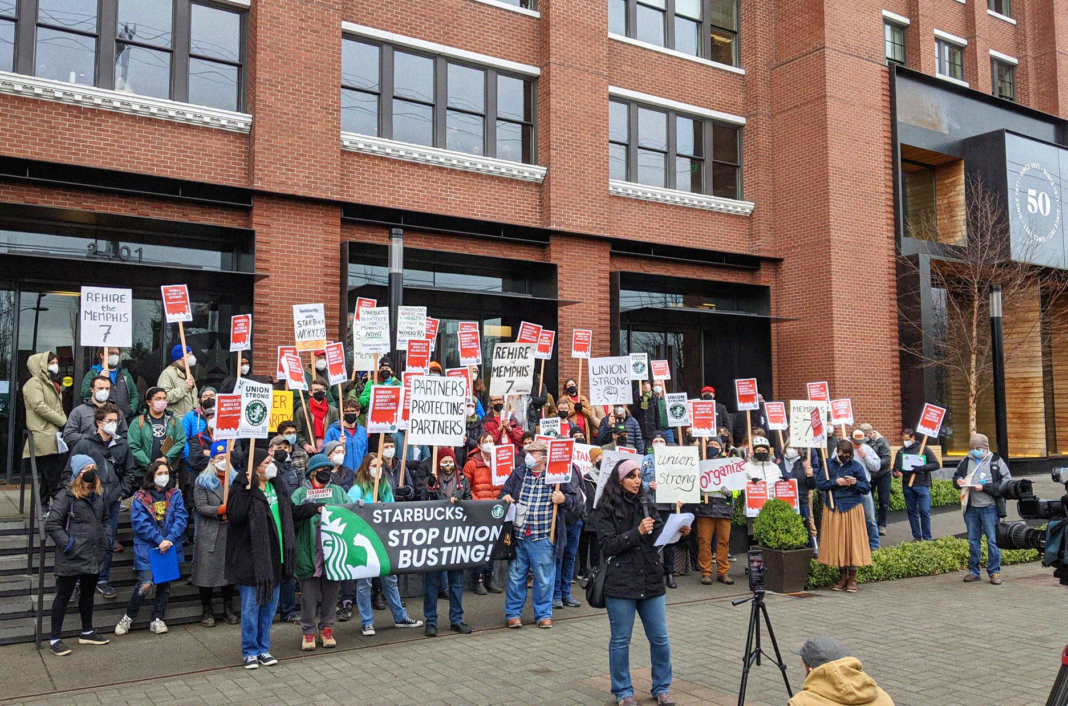 Yesterday, Starbucks workers and supporters across the country held public rallies to demand reinstatement of the Memphis 7 who were fired in an act of open retaliation for union organizing at their store, and to call for an end to Starbucks’ brutal union-busting tactics! In Seattle, Starbucks’ hometown, members of Socialist Alternative, Seattle DSA, Seattle Education Association, United Auto Workers, UFCW, and the Teamsters joined in solidarity with Starbucks workers in their fight – we will need to use the full force of our movement to take on the bosses and their attacks on the workers’ movement!

The firing of the Memphis 7 workers organizing for a union is utterly shameful. It is anti-worker and predatory, and we will not let it stand.

Last time we were here at the corporate headquarters, we noted how Starbucks executives were talking out of both sides of their mouths. How they were pretending to be “progressive”, saying they would respect workers’ right to a union. But at the same time they were already carrying out an anti-union campaign – with “captive audience” meetings, with threats, with temporary closing of stores. With flying out former CEO Howard Schultz and an army of executives to Buffalo to intimidate workers.

Now they have ramped it up to another level with the firing of the entire organizing committee in Memphis. The crime of the workers? Wanting a union.

We have two of these courageous workers here with us today.

And we have workers from a flagship store, Seattle Roastery, who have just announced their organizing to win a union. This is now the fourth store in Starbucks hometown that has joined the fight.

Starbucks executives are scared of workers getting organized. They see how rapidly this union drive is spreading, now at more than 80 stores across the country and counting. They hate it. No tactic is too vicious for them, no lie too shameless. Nothing is off the table in their ruthless campaign to stop workers from winning a union.

How much the bosses hate and fear workers having a union should act as a kind of a reverse barometer for us – the more the bosses hate something, the more you can be sure it’s good for workers.

Capitalism is a zero-sum system, in which the eye-popping wealth and opulence of the bosses comes directly out of the pockets of the workers whose labor creates the profits in the first place. The CEO Kevin Johnson’s 20-million-dollar salary and former CEO Howard Schultz’s 4.3 billion dollars in wealth is a result of denying workers decent living standards. What we can win as workers – increases in wages, in benefits, in workplace safety – all of that cuts into the profits of the billionaire class.

We cannot afford to have illusions in the bosses. We cannot have a false idea that workers unionizing and having some power in the workplace is good for the bosses, and that we simply have to convince them it’s good for them. No. We should expect the bosses to viciously fight back because workers having a union and fighting for their needs is not in the bosses’ interest, and we should look for solidarity not from them, but from our fellow workers.

We are fighting for every one of the Memphis 7 to get their job back, with full back pay. And we have to do what it takes, with an escalating series of actions, if it means shutting down every Starbucks store in this country.

Because we cannot let this attack go unanswered. What the executives want, what they are hoping to do, is make workers fear for their jobs when they see a union card.

For our strategy to be effective, we must combine our defense campaign of the Memphis 7 with an offensive fight to win the union.

Because the best defense is a good offense.

In the right-wing, big-business-backed recall campaign against my socialist City Council office last year, we combined our fight against the recall with our fight for renters’ rights and for rent control. At the same time that we were under attack from big business, with no Democratic Party Councilmember willing to speak even once against the recall, we won an unprecedented series of renter victories. Including six months’ notice for any rent increase. The nation’s strongest ban on school-year evictions of children and public school workers. A law mandating landlords pay tenants three months’ rent when they displace their tenants with rent increases of 10 percent or greater. And we gathered 15,000 petition signatures for the strongest rent control in the country.

That’s how we defeated the recall. Because we refused to back down, and instead, went all out in our fight.

Today is an important step – the first national day of action by Starbucks workers in a number of cities around the US.

We need to use today as a launch pad to begin building for mass solidarity rallies, again on a common day of action nationally, to demand the reinstatement of the Memphis 7, to spread the word about this unjust firing, and to build broad community support for a Starbucks union.

We want hundreds of people in each city to come together for big rallies and marches. To make that happen we need to prepare a few weeks in advance. We need to leaflet and poster, talk to Starbucks workers, to other workers, get the support of other unions and community organizations.

We also need to publish op-eds in the media around the nation about the company’s outrageous union busting and attack on the Memphis seven. In local papers, in student papers, on progressive websites. We need to set up tables and leaflet outside Starbucks stores, to make sure all the workers and the customers know about CEO Kevin Johnson’s shameful attack on workers.

We need resolutions by City Councils, State Legislatures, by U.S. Congress, by labor unions. Here in Seattle, workers and my office forced City Council Democrats to vote YES on our resolution last week. My fellow Democratic Socialists of America member and Chicago Alderman Byron Sigcho-Lopez has introduced a similar resolution to be voted on soon by the Chicago City Council.

Legal action will not be enough. It could take even a year or longer. Rather than waiting for the lawyers and the National Labor Relations Board, we need to use the coming weeks to win the Memphis jobs back and the coming year to win the union.

Our power as workers comes from the fact that without millions of us going to work, they make no profits. Our power comes from our ability to organize and shut down the bosses’ profit machine.

And to go on the offensive in our unionizing drive, we need to combine the fight for a union with the fight for concrete demands.

Let’s talk about wages. Starbucks executives say they will raise the minimum wage at the company to 15 dollars an hour this summer. We all know this is not enough. And every month that passes, with the historic levels of inflation alongside unaffordable housing, it’s worth less and less. Workers should discuss what wage they want to demand – we can start the discussion by calling for a bare minimum of $20 an hour, plus tips – automatically adjusted for inflation going forward.

Demands are essential in fighting back against anti-union propaganda. Starbucks executives are telling workers they don’t need a union. That the union just wants their dues money. The best way to fight back against this is to expose the lies of the bosses and talk about what this union is fighting for.

In Seattle, Starbucks executives are peddling the lie that workers here should feel privileged – that they are especially well-treated somehow. Let’s be clear. Rents in this city are out of control. And Starbucks workers are better paid here than in many cities for one simple reason – because the 15 Now movement, led by rank-and-file workers, union members and socialists, won the 15 dollar minimum wage in 2014, which is now over 17 dollars an hour. We won that NO THANKS to Starbucks corporation – in fact, Howard Schultz opposed the wage increase at that time.

We must base ourselves on building broad solidarity in the working class. Howard Schultz and Kevin Johnson – they are not quote-unquote “partners” of ours. These executives are not going to wake up someday with an attack of conscience. And we’re not going to win them over with our moral arguments. No.

We will only win, whether it is the Memphis jobs or our union, by involving wider and wider layers of the working class, who are our real partners in this fight. Our partnership is with the wider working class who make this society run. Not with the bosses who steal the wealth we produce.

Because capitalism is a bankrupt system in which the ultra-wealthy amass mountains of wealth without lifting a finger. We need a new system, a new society, a socialist society.

But to succeed, to win workers’ rights, good standards of living, affordable housing, is through class struggle, through building a militant labor movement. This is the only way forward.