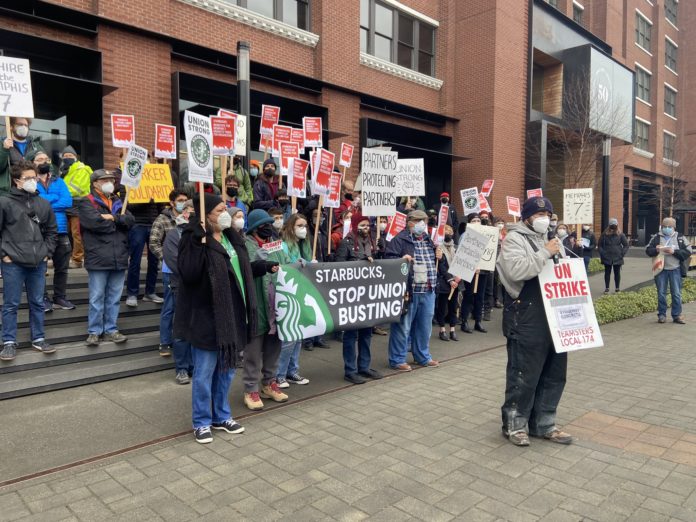 On February 14, unionizing Starbucks workers held public actions in cities across the country to demand the reinstatement of the unjustly fired #Memphis7. With Starbucks continuing their union-busting – just today maneuvering to hold up election results from the Mesa store poised to be the third location to win a union – we need to step up our fight with more rallies, potentially walkouts, and building maximum solidarity among our fellow workers.

As socialist City Councilmember Kshama Sawant said in her speech to the Seattle rally, “We need to use today as a launch pad to begin building for mass solidarity rallies, again on a common day of action nationally, to demand the reinstatement of the Memphis 7, to spread the word about this unjust firing, and to build broad community support for a Starbucks union!”

Check out the on-the-ground reports on the day of action by Socialist Alternative members from coast to coast – we need the full force of the labor movement in every city mobilized in order to stop Starbucks’ union busting, and build a movement for fighting unions at every Starbucks!

On Tuesday morning at the Starbucks Headquarters, where the iconic Starbucks Siren looks out from atop a looming 9-story clocktower, there were dozens of people picketing outside chanting “What do we want? Union! When do we want it? Now!” Almost 200 people came out in Seattle for an 8 am rally to demand that Starbucks immediately reinstate the Memphis 7.

Worker after worker got up to decry the unsafe, unacceptable working conditions that are driving them into their fight for a union at Starbucks. One of the Memphis 7, who had come to Seattle to bring the fight for reinstatement to the doorstep of executives like Howard Schultz and Kevin Johnson, drew out how our actions were part of a national day of action demanding that Starbucks stop their blatant retaliatory union busting.

In Seattle, we’ve seen a huge outpouring of support for the brave Starbucks workers’ fight to unionize: we won the first city council resolution supporting their fight, and already socialists have led the charge winning solidarity resolutions in 3 unions.

Socailist City Councilmember Kshama Sawant, who used her office to bring forward and fight for the resolution demanding Starbucks executives accept card check neutrality and immediately stop their vicious union busting, spoke powerfully at the rally. She drew out how it’s important to continue to build on this momentum if we are going to stay ahead of the bosses, and that this day of action should be a stepping stone to expanding the national day of action in more cities.

In Chicago, an after-work rally of Starbucks workers at the company’s Midwest HQ drew support from Socialist organizations and three elected officials, two from DSA. Independent socialist alderman Byron Sigcho-Lopez was cheered as he thanked the workers: “For your courage, for your example – across the country, from coast to coast! We’ve got your back!! We started this campaign in support of the workers, and in support of Socialism! Because power does not concede without a demand and we have to be clear that both Republicans and Democrats are complicit with the current state of affairs, which continues to put profit over people! it is important that we continue to challenge that with solidarity, with more organization, with more fights, with more action! This is how we’re going to win that fight from coast to coast!

Already the vast majority of Chicago’s City Council is in support of a resolution to send a message loud and clear to this corporation – that has no problem giving their CEO a 30% raise in the middle of a pandemic but not to pay the fair wages of their workers – we say, enough of the bullshit, we are going to defend the workers at Starbucks!”

On February 15th, Boston Starbucks workers held a rally against the latest union busting effort taken by the company. Earlier this month, seven members of the organizing committee at a Memphis Starbucks filing for a union election were fired. The rally was held in solidarity with these workers and demanded their reinstatement.

Two of the Starbucks workers who spoke at the rally announced that their store had just filed to unionize. They spoke about the impact working during the pandemic has had on their mental health and the complete disregard shown for them by their boss. They wanted to unionize not so they could have another “boss” or “bureaucracy” making decisions for them, but so they could have a democratic say in what goes on in their workplace.

Local small-chain baristas and members of Socialist Alternative Sam White and Matt Burchfield spoke on next steps for the movement to get the Memphis 7 reinstated. They proposed for a national day of action to take place in two weeks and for seven minute walkouts from stores in solidarity with the seven workers who were fired.

Following the speeches, the crowd marched downtown to another Starbucks. Chants in favor of a living wage and the reinstatement of the Memphis 7 broke out amongst the Starbucks workers and the small-chain baristas, showing the potential for solidarity to be built across the unionizing industry!