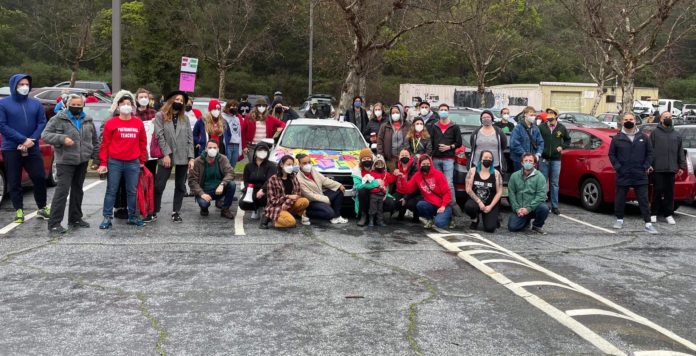 Oakland public schools, at the epicenter of school privatization for over a decade, have been continuously battered by cuts and closures. And while the current crisis may be a new low, the willingness of teachers, students, and parents to fight only continues.

It is true that everyone is exhausted. The Omicron variant’s intense contagiousness has made the fall’s safety measures less effective and inadequate. In the first two weeks of instruction after the holidays, attendance has been debilitatingly low, both from teachers and students. Roughly one in five Oakland teachers have been staying home, while an estimated 30-40% of students are also out due to concerns over the new wave of the virus. Some of my classes have less than half of students regularly attending and one of my classes last week had four students present at the beginning of class.

Student trust in the public education system was already undercut by the disaster of “distance learning” in 2020/1 and the prospect of another long term return to distance learning is potentially devastating for everyone. This marks the third straight year of chaotic and inconsistent instruction. Considering the scale of the COVID crisis, students feel the urgency for serious measures to be taken to improve school safety.

Most teachers are delaying key instruction until a majority of students are regularly coming to class, instead planning space-filler lessons. For students, most of their classes have a substitute or hobbled instruction as the teacher does their best to teach the students who are present while also not leaving absent students hopelessly behind. Due to the severe shortage of subs, many classes are simply unattended, and across the Bay in San Francisco, the Superintendent was substituting classes.

Further pressure is being put on teachers to sub during their prep periods to cover for their coworkers who are out sick. This has prompted some school sites in the district to take “work to rule” actions by refusing to take on these assignments.

At elementary schools, once per week pooled testing was being offered to every student. This had been a very effective strategy in the fall, but now, during Omicron, once a week testing is far too slow to meaningfully impede the virus. High schools lag behind even this inadequate standard of testing, where no systematic testing is in place. Instead, ad hoc testing booths are inconsistently campus and it is up to the individual responsibility of highschool students to request tests for themselves –when they are available.

School funding is based on student attendance, and even prior to Omicron, attendance in Oakland schools had dipped from an average 94% in pre-pandemic years to 90%. Chronic absenteeism has risen from 10% pre-pandemic to 34% this year. These absences are a direct result of the psychological and health effects COVID and distance learning have had on students and families. Many students are staying home to self quarantine, while others are “falling off the bottom” as they struggle to cope with the immense pressures put on them. Cruelly, these absences are being used by the County to justify cuts to the school budget which not only will reduce the district’s ability to implement direly needed safety measures, but will also threaten teacher and staff jobs and class size maximums which the Oakland Educators Association (OEA) has fought tooth and nail to secure. At the last school board meeting, one school board member made the offhand comment that class sizes may need to increase by five.

This is the same effect as No Child Left Behind’s merit funding for schools, where the schools which are suffering the worst effects of COVID are being punished with further reduced resources. The union must take up a serious fight against these budget cuts which are likely to be voted on January 26.

A Flurry of Wildcat Actions

Almost immediately on return to class after the winter holiday, teachers began to organize. On January 7, over 500 teachers from 12 schools, including my site, participated in a sick-out strike for COVID safety. This was organized independently from official union channels and participation from my site was nearly unanimous, with reportedly only eight students attending the supposedly “open” school. A car caravan traveled through East Oakland where most of our students live, and circled the district headquarters with signs demanding safe schools and N95s for students.

In part of a national expression of the untenable situation, numerous other schools have and are taking actions for school safety, including sickouts and working to rule. A lack of centralized direction from the official union leadership has meant these actions have been happening on different days with some schools participating on some days, and other schools on other days. The effect has been a kind of “rolling sickout.”

Over 1,200 Oakland students have signed a petition demanding a return to distance learning unless the district provides KN95/N95 masks in schools for every student, 2x a week PCR and rapid tests for everyone on campus and more outdoor spaces to eat safely when it rains. Last Thursday, students from schools across the district stayed home in protest, kicking off a student strike which is set to continue into this week. Teachers at eight schools staged a sickout in support of their demands. Because district funding is based on student attendance, this is a powerful threat.

The district has responded more to these actions than the last six months of safety bargaining. The district has now ordered 200,000 N95s for students, which is a huge step, working out to about 5 masks per student, but this supply could disappear very quickly and more masks will need to be ordered. Furthermore, last Friday, which had previously been a teacher professional development day, was made a full day-off after a wide threat from teachers to walk out.

The situation remains at a crisis level and it is unclear how long the Omicron spike will threaten and disrupt our schools. One thing which made the 2019 Oakland Teachers strike so powerful was the high level of unity between teachers, parents, students, and the wider community. The only way we will be able to achieve safe, equitable, well functioning schools is through similar powerful and united action. The union should be organizing community meetings where teachers, students, and families can build a cohesive strategy to fight for safer schools.

Despite claims otherwise, there is no shortage of money to address these issues. California is home to some of the richest companies on the planet, which have grown their wealth by obscene levels during the pandemic. But there is a shortage of political willpower from the state to tax these companies and put the desperately needed resources into creating a truly safe and thriving public school system.

The Oakland School Board just reversed its position on opposing school closures. Mike Hutchinson, a leader of the movement to stop school closures has been the only school board member consistently fighting against cuts, closures, and charter schools. The teachers’ union has an opportunity to elect more anti-cuts Board members in November. Now is the time to start that fight.

While the privatizers are probably feeling a level of confidence given the huge complications facing Oakland public schools these days, this fight is far from over.