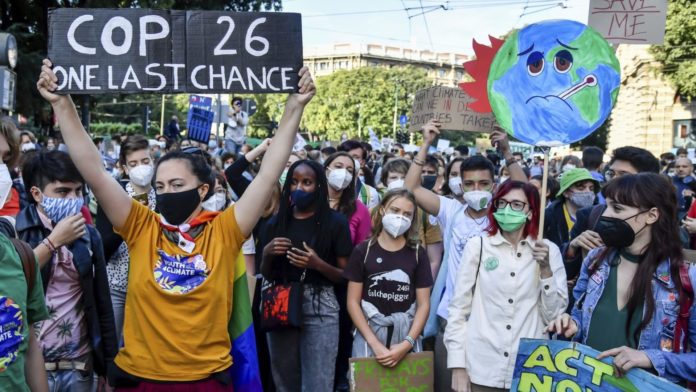 “The last best chance to get runaway climate change under control.”

That’s how the United Nations Climate Change Conference (also known as COP26) is being pitched in the lead up to the two-week summit.

The UN, who have twiddled their thumbs for decades while the science of climate change has been crystal clear, apparently now holds the key to our “last best chance?” The same organization that has continuously failed on meeting their emission-reducing benchmarks in treaties like the Kyoto Agreement and Paris Accord? Okay, cool.

Leaders like Jair Bolsonaro of Brazil, Vladimir Putin of Russia, Xi Jinping of China, and Australia’s deputy prime minister Barnaby Joyce won’t bother touching down in Glasgow for COP26, even for optics. Brazil, Russia, China, and Australia comprise some of the largest global polluters, and all have interests in coal, gas, oil, and the meat and dairy industries. These are the major contributors to the rising CO2 levels in the earth’s atmosphere. The four nations have been described as “barely even trying” in the fight to lower emissions, either by refusing to make an effort, or greenwashing their progress. At one point, they were able to pretend that they were all in this together. But with economic and political tensions growing in the U.S.-China Cold War, national and capitalist interests are back on top. The consequence for putting these interests first? A complete disregard for the planet and every person living on it.

U.S. president Joe Biden and Australian prime minister Scott Morrison will plan to attend the climate conference among others, not because they don’t have interests in coal, gas, and oil, but because pressure to be doing something about climate change is forcing them to save face.

Will any oil companies be at COP? Well, not literally, but they will certainly be there in spirit: big names like ExxonMobil and Chevron have been on a lobbying and disinformation spree for decades, and have now turned to Facebook ads and greenwashing their lobbying reports to shareholders. Their recent advertising vigor comes after the U.S.’s re-entry into the Paris Climate Agreement (which is bad for their business!) and President Biden’s proposed budget bill, which — as initially proposed — was supposed to support working-class families and fight climate change. The longer they can sell the idea of “clean,” “economy-boosting” fossil fuels on social media and to political decision-makers, the better off we’ll all be. Right?

These companies really don’t have much to worry about with their fossil fuel-friendly Biden administration. But Biden didn’t run on fossil-fuel friendliness on the campaign trail: his administration had the bold ambition of ending fossil fuel extractions on all public land. Sounded good! But it was too good to be true: Biden is on track to pass out “more oil and gas drilling permits this year than any under President Trump and the most since George W. Bush.” He’s given the nod to continue offshore drilling in the Gulf  — this news came just three months before an oil spill off the California coast. The restrictions the president imposed on the coal, gas, and oil industry during his first month in office were just temporary moves. Was he thinking no one would notice when he reversed on all of it? Good luck with presenting this update in Glasgow, Joe.

But don’t worry, in this period of climate turmoil, the banks will help us out. They’ve pledged to fight climate change. You should totally trust them, despite this troubling statistic: “three out of every four board members at seven major U.S. banks have current or past ties to climate-conflicted companies or organizations – from oil and gas corporations to trade groups that lobby against reducing climate pollution.” Ignore the fact that Bank of America, Citigroup, JP Morgan Chase, and Wells Fargo made the Midwest’s Line 3 project possible “with billions in loans.” One hundred percent of JP Morgan Chase’s board of directors have “climate-conflict ties,” but they just signed on to the Net-Zero Banking Alliance.
What’s it called when you say you’ll do something when you know you won’t do it?

The fossil fuel companies have a couple of guardian angels in Congress too — Senators Joe Manchin, Kyrsten Sinema, and actually, the majority of the U.S. Senate and U.S. House of Representatives. They are doing everything in their power to keep their power, which means staying in the fossil fuel industry’s pocket. Joe Manchin isn’t even just in the pocket of fossil fuel bigwigs; he is literally a coal baron himself. He owns millions of dollars in coal stocks. He founded a few coal companies himself. Then passed them on to his son. It’s no wonder that he and Kyrsten Sinema have held Congress hostage, forcing Democrats to strip all meaningful  climate legislation. And that’s in addition to stripping out key Biden administration priorities like free community college and an extension of Medicare. Their highly-touted budget reconciliation bill is crumbling, and so are the hopes of getting anything done before COP.

So sure thing, Biden, we’ll see you in Glasgow. But we know your empty words of care for the planet mean nothing when you and your party have failed to deliver on the crucial climate promises you’ve made over and over. We are keeping score, and the “last best chance” is not you.