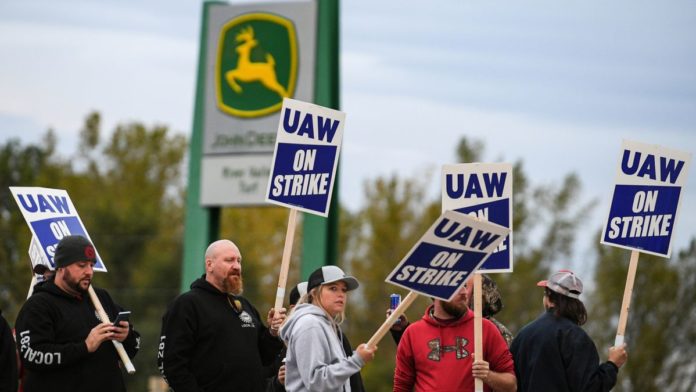 Emotions are high on the pickets as 10,100 John Deere workers go toe-to-toe with the farm equipment manufacturing giant. In a record setting year for the company, John Deere was on track to make $5.9 billion or a 69% increase over its previous record; before the strike, that is. After spending over $1.7 billion on stock buybacks, paying out $761 million in dividends and raising the CEO’s salary by a mind-boggling 160%, they are only offering a $1.15 average raise for workers. As one worker’s shirt put it “100% Essential in 2020; Only 5% in 2021.”

Unable to meet production demand due to supply chain breakdowns and a “worker shortage” Deere’s dependence on their employees has never been more evident. It exposes what is really driving this “worker shortage”: no one wants to work long hours in demanding jobs for low pay. In the area, other major employers such as Target and Tyson have outpaced Deere’s wages. Once considered a “premium” employer, their commitment to shareholders has undercut their ability to fully capitalize on this moment of unprecedented profits. Every day of this strike costs Deere millions of dollars.

The UAW rank and file is confident they can win a contract worth fighting for. This led to a revolt against UAW’s International leadership which has been dragging its feet into this strike after trying to push a concessionary contract onto membership following a 99% strike authorization vote. The delayed Tentative Agreement fell woefully short of demands and was seen as an insult to members. With a 90% turnout this resulted in a resounding 90.6% ‘No’ vote. UAW members were heard booing and chanting “strike” while they used Q&A time to tell UAW leadership they have failed to do what they demanded: fight for a contract that meets their needs and organize a strike that can win it.

What is needed now is a well organized, energetic strike that can stop shipments and halt production and UAW leadership has made it clear this is not their goal. It will come down to the rank and file to organize a victorious strike. The outcome and how it unfolds is likely to have far reaching impact on this resurgence in labor struggle which is being dubbed #Striketober. As 60,000 IATSE and 37,000 Kaiser Permanente workers prepare for strike action they will be looking to the rank and file of the UAW in this fight. As we enter into the second week of picketing, Socialist Alternative will continue to bring updates from our conversations with John Deere workers. Solidarity with UAW’s rank and file in their battle against the billionaire class!