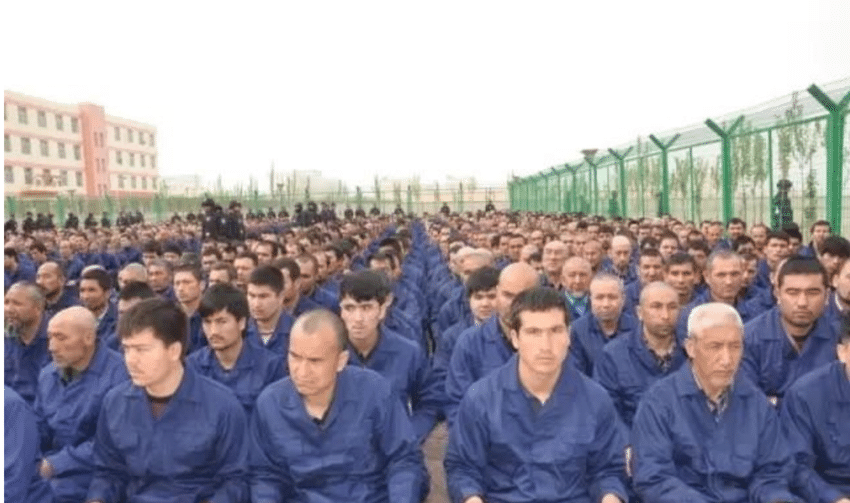 In the second of our two-part article on Chinese imperialism, we wrote:

“The huge network of concentration camps, disappearances, torture, rape and more in Xinjiang, directed against the Uighur and mostly Muslim population, are not made up, but are the harsh reality.”

We also predicted that some Stalinists and neo-Maoists, “tankies”, would focus their defense of the capitalist dictatorship in Beijing on the issue of Xinjiang. They would particularly focus on Adrian Zenz, we wrote:

“Internationally, these facts were first published by researcher Adrian Zenz, a Christian fundamentalist and right-winger. But those including China’s state-controlled media who use Zenz’s politics to discredit his reports skip over the fact that the source is official Chinese statistics. He is someone the pro-CCP propaganda wants to focus on, but the facts are also backed up by stories from women who have themselves been in the camps.”

Tankies and pro-authoritarian so-called lefts who attack our article make three basic points: 1) our facts are from Zenz and wrong, 2) women who tell their stories about rape are lying, 3) we have the same position as US imperialism. They are all completely wrong and have only one purpose: to avoid a real discussion about the oppression in China and Xinjiang.

We are clearly not relying on Zenz for facts, but as we pointed out he was the first to publish them, something the Chinese dictatorship and its apologists use. However, the facts on birth rates he published were from official Chinese government statistical yearbooks for China and Xinjiang. Zenz is also far from alone in making those facts public. For example, facts in this article from news agency AP are from “Xinjiang Statistical Yearbook”.

Another report, also based on Chinese statistics is published here.

All the facts above prove the emptiness of tankies’ attempt to defend the situation in Xinjiang regarding forced birth control.

In one email, a tankie particularly singled out a woman who told her story about rape and torture in different interviews. Anyone with a minimum of knowledge about violence against women understand how much it takes for a victim to tell anyone about rape and torture. And then to do so against a brutal dictatorship, publicly in the media. Also, often it takes time until the real story is told. The Chinese dictatorship has a well-known track record of threatening retaliation against relatives and using this to exert pressure on Chinese dissidents overseas, whether from a Han background, as well as from any of the minorities, to drop accusations against the regime and stop speaking to the media.

Mass rape and violence against women is an important part of counter-revolutionary repression against revolts, as shown in many countries over the last period: Egypt, Sudan, Myanmar, Colombia and more. It is standard for oppressors to deny this happens and call women liars.

The recent report from Amnesty International (June 2021) on Xinjiang, “Like we were enemies in a war”, is based on interviews with 55 people about the camps — torture, forced confessions, “education” — and the massive surveillance against the Uighurs. It also refers to leaked Chinese state documents. It includes an overview of interviews with rape victims.

The Chinese regime, after first denying the camps, later admitted their existence, claiming they are for “re-education”. No independent observers, however, have been allowed to enter the camps. A Swedish reporter who visited Xinjiang this summer reported about being followed every step and local inhabitants being discouraged to talk to her.

“The people of Xinjiang may be the most supervised in the world. Everything they do is monitored. New SIM cards for mobile phones must be registered, at every city border there are police checkpoints where everyone must get out of the car and into a ‘fast police station’ where bags and mobile phones are checked. Through their mobile phones and GPS transmitters on cars, their movement patterns are followed. Surveillance cameras hang everywhere. Face recognition technology is used for everything from payments to when you need to refuel the car”, she reported.

The real situation in Xinjiang can’t be hidden and says everything about what kind of regime tankies are defending.

US imperialism for a long time cooperated with Beijing. The historically rapid increase in production, trade and finance benefitted the ruling classes in both countries. US president George Bush established “counter-terrorist” cooperation with China following 9/11 2001. This was used by Beijing in its clamp down on Xinjiang. Under Barack Obama, US silence over the repression against Uighurs and in general in China continued.

It was only following sharpened inter-imperialist rivalry between US imperialism and Chinese imperialism that Donald Trump’s administration raised the issue of Xinjiang. As recently as June 2019, according to his security adviser John Bolton, Trump told Xi Jinping that building the camps in Xinjiang was “exactly the right thing to do“.

US imperialism has no intention of supporting the Uighurs, other Muslims, or workers and youth facing the increased repression in China. Overall, US imperialism supports and has good relationships with many dictatorships, such as Saudi Arabia and Egypt. Its “war for democracy” in Afghanistan and Iraq were about showing power and resulted in catastrophes.

US imperialism wants China as a subordinate capitalist partner, not challenging its global domination economically and militarily. At the moment, its campaign is about containing and limiting Beijing’s regional and global influence. If US imperialism at a later stage considered regime change in Beijing, the new regime, if such could be established, would not be democratic or in the interest of workers and the poor.

Chinaworker.info and International Socialist Alliance raised the issue of Xinjiang long before it became a major issue in global media and in the new Cold War. The increased oppression of mainly Muslim Uighurs coincided with capitalist restoration in China. Xinjiang is strategic geopolitically, a gate to markets and trade and in a volatile region of contested borders and competing powers (bordering Afghanistan, India, Pakistan, Central Asia). It has also become a main producer of oil, gas, cotton, tomatoes and solar panels, even on a global scale. This combined with Beijing’s zero tolerance towards demands for national and minority rights explains the extra repression from a regime that does not tolerate any opposition in any part of its territory.

Marxists always take an independent working class position, what is best for struggle and consciousness, in order to achieve a socialist society. This means to stand against both US imperialism and Chinese imperialism.

Workers, youth and national minorities fighting for their rights and against repression in China, goes against the interests of US imperialism. Likewise, Beijing does not want workers’ strikes and movements against oppression such as BLM in the US. None of the ruling classes in respective countries want mass movements from below, challenging their power and the system. Socialists stands for full democratic rights — for trade unions run by workers, the right to demonstrations, mobilizations and occupations, for the rights of youth, climate activists, feminists, LGBT+ activists and others to organize. On all these crucial issues, tankies are silent, instead defending strong repression against these rights. In their world outlook there is only a binary choice: either you support the CCP and Chinese imperialism, or you are in the same camp as US imperialism. This was of course never the position of Marx or Lenin.

As Marxists, we stand for capitalism to be abolished in the US, China and globally, replaced by a socialist society. When US politicians warn against socialism and the Chinese regime imprisons striking workers, it is out of fear for the future of their economic and political system.