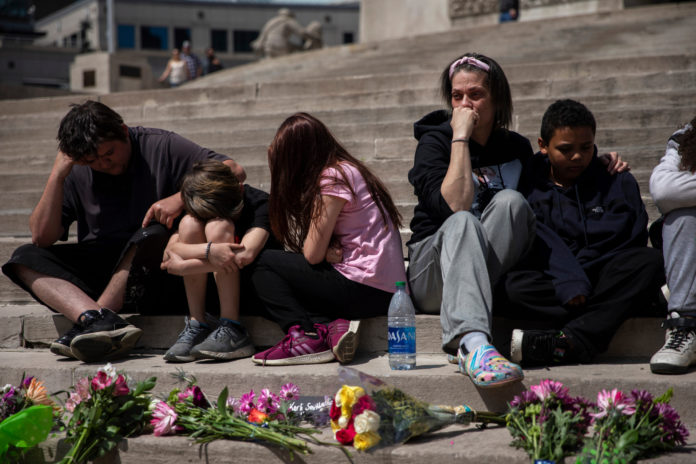 “What we have is compounded trauma,” said Shani Buggs, an assistant professor with the University of California at Davis’s Violence Prevention Research Program. “The pandemic exacerbated all of the inequities we had in our country — along racial lines, health lines, social lines, economic lines. All of the drivers of gun violence pre-pandemic were just worsened last year.”

The COVID-19 lockdown of 2020 was without any close historical precedent. It was also accompanied by the biggest economic slump since World War II. Studies of previous pandemics and quarantines showed that psychological distress, including PTSD and depression, were to be expected. As in every social crisis under capitalism its effects were dramatically different based on which class people belonged to and what racially segregated community they lived in.

Millions of middle class people were able to stay home, work remotely, and even save money to buy bigger houses, while low-paid grocery, food production, and delivery workers, disproportionately people of color, living in the most poorly served communities and widely reliant on public transit, had no such options. For millions of working class women, the demands of childcare put paid work out of reach. Millions went hungry and got seriously sick. The impacts of the pandemic on the social and emotional wellbeing of working class communities was devastating.

It is not surprising that this stress and dislocation manifested itself through increasing levels of violence, especially in the U.S., where economic precarity and the absence of comprehensive social services have incubated levels of violence not seen in other advanced industrial economies. Violence against women increased, although with many women’s shelters and rape crisis centers closed during the lockdown the crisis is likely even larger than what has yet been reported. What can be quantified, however, is the widely publicized increase in gun violence and in particular, mass shootings.

The U.S. ranks 20th in the world for gun violence. All of the 19 countries that are worse have experienced the intervention of U.S. imperialism; 18 are in the Western Hemisphere, the exception being Afghanistan which has been in a state of war since the 2001 U.S. invasion.

So far, 2021 has maintained the same pace with 303 mass shootings as this paper goes to print, and a total of 9,637 non-suicide gun deaths. Gun suicides stand at 11,616. Some media reports point to an accelerating rate of increase, and with most of the summer still before us, 2021 will almost certainly see more shootings than last year.

While the increases in gun violence are serious, they remain very far from the levels of violence in the 70s, 80s, and 90s. But there are now more guns in U.S. society than ever before: in 2020 more than 23 million guns were sold, a 66 percent increase over 2019 sales. 8.5 million of these were bought by first-time gun buyers, indicating new levels of fear and insecurity from which people seek to protect themselves.

The surge in violence is also being used by politicians to justify reactionary positions. Right-wing politicians and media have claimed since the George Floyd protests that society is being engulfed by chaos driven by the left. Establishment Democrats, especially in big cities, have used these fears to push back on attempts to reform policing such as cutting bloated police budgets or attempts to set up elected civilian bodies to hold police accountable.

On the federal level, Joe Biden on June 23 pledged to go after illegal gun dealers and help states tackle increasing violence through more policing. The U.S. Treasury Department released information on how states and localities can use the $350 billion from the American Rescue Plan Act, allocated to help economic recovery from COVID-19, to employ more police officers to deal with this spike in violent crime.

There are also, understandably, calls for restrictions on gun sales. Socialist Alternative supports some measures of gun control such as banning high-capacity magazines, automatic and semi-automatic weapons, implementing background checks and waiting periods for gun sales (while guaranteeing the right to appeal to avoid discriminatory and racist enforcement of these rules against the Black working class), and closing the gun show loophole.

However, with an estimated 400 million guns already in circulation and a firearms industry that continues to push gun ownership as a solution, a serious anti-violence program needs to focus on fighting the poverty and alienation that create the conditions in which guns are used.

Addressing the Roots of Gun Violence

Gun violence coincides with, and exacerbates, poverty, segregation, and inequality with Black men almost eight times more likely than white men to be its victims. Tragedies like that of Philando Castile, who was shot after Castile informed a police officer that he had a licensed firearm in the car, point to the enormous dangers of relying on gun control measures which would have to be enforced by the police. A program to rein in gun violence has to include a program for community control over the police. We call for elected police accountability councils with full powers to investigate, discipline, and discharge the police, and for police budgets to be reduced and the funds used instead for mental health and other community services.

What is needed to reduce gun violence is a transformation in social and political priorities. The violence and alienation seen in working class communities is a reflection of tremendous instability in the foundations of society as well as the fact that powerful, left wing political movements like Bernie Sanders’ campaign and the Black Lives Matter rebellion last summer have not produced clear political gains.

The response of working class people and the left should be to put the blame squarely on the billionaire class. What’s needed are movement-building campaigns to tax the rich and corporations on a scale not seen since the infrastructure expansion of the post WWII era. This is where the wealth exists to pay for a workers’ Green New Deal, expanded and improved Medicare for All, massive investment in treating the mental health crises, and massive investment in the communities most affected by gun violence. Such a program would include creating millions of jobs at union rates of pay, building decent, affordable housing and fully funded schools, libraries, and community centers. This can create the conditions for stable communities and expectations, especially amongst the youth who are by far the hardest hit by gun violence.