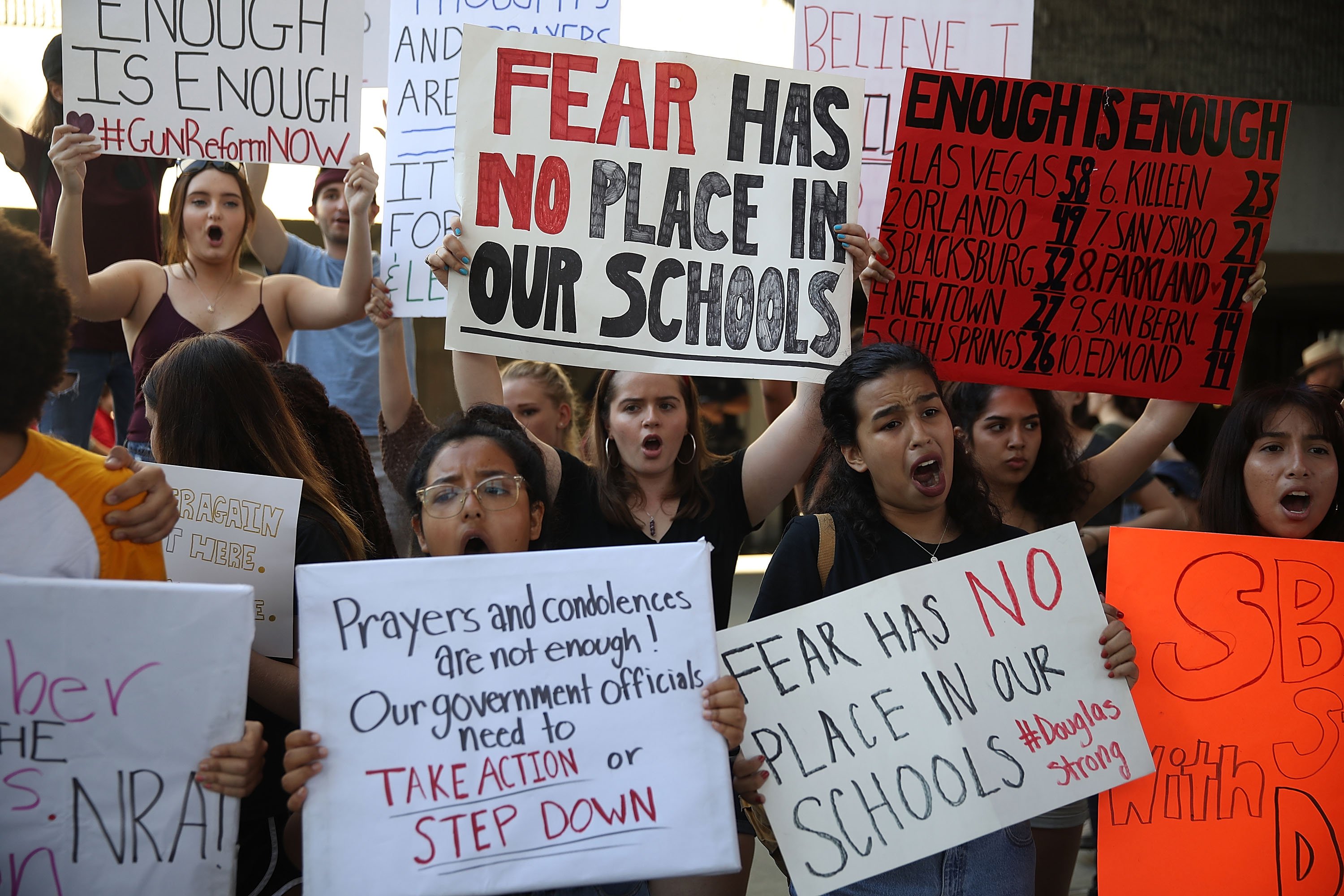 As we publish this, walkouts have been held in schools across the country in solidarity with students in Parkland, Florida. Hundreds of high school students walked out, marched, and rallied in Florida, Maryland, Arizona, Illinois, Kentucky, and Minnesota with many more preparing for walkouts in the coming weeks.

Last Wednesday, seventeen young people were gunned down and many more injured at Marjory Stoneman Douglas High School in Parkland, Florida in yet another in a seemingly endless succession of mass shootings at schools.

In the past few days, the survivors have stood up to the arms industry and the politicians they control and called time on their enabling of mass killings. Five years and 239 school shootings after the massacre of Sandy Hook – years during which the politicians hired by the gun lobby have repeatedly used “thoughts and prayers” to silence any serious discussion about addressing the madness of a society awash with guns, including automatic weapons meant for the battlefield – the dam has been broken by a group of energized and furiously angry high school students.

Inspired by the Florida students, multiple demonstrations have taken place throughout the country, including on the headquarters of the central organization of the gun manufacturers’ lobby, the National Rifle Association.

A march in Chicago, called at a few days’ notice, brought out about 3,000 people, mainly women, on Sunday, February 18. Calls from the platform against NRA-supported politicians, to “Vote them out” were replaced on the street by “Throw them out.” This is indicative of a mood in society that does not want to wait for the November elections. The lead is being given by youth. Students in high school today were 10, 11, or 12 when Sandy Hook happened in December 2012. They have grown up with active shooter drills and those drills, tragically, didn’t save them.

Further protests are planned – on Wednesday, February 21, students in Broward County schools are holding a lunchtime protest; on March 14 the national Women’s March organization has called for a coordinated walkout of students and teachers in schools across the nation. Plans are also being laid for a national day of action on April 20 which is the anniversary of the Columbine school shooting as well as for a march in Washington DC on March 24.

Unions that represent teachers and other school employees should support these calls and mobilize their members to take action alongside students, including strike action where possible. The mobilizations should escalate around concrete demands including banning military-style semi-automatic weapons and other basic gun safety measures; full funding for all school services to help students in crisis situations and demilitarization of our communities.

School shootings are the most horrific aspect of the epidemic levels of gun violence in the United States which is far higher than in any other wealthy society. There are many reasons for the scale of violence but all point back to the savage history of American capitalism and the brutal alienation and inequality it engenders today. The past 40 years of neo-liberal policies have seen relentless attacks on the historic gains of working people, women, and black people. These attacks have been carried out under both Republican and Democratic administrations. With the profound weakening of the labor movement and the massive increase in inequality, there has been a loss of the traditions of collective action and solidarity which are vital to pushing back the dark forces tearing at our social fabric.

While acknowledging that there are many legitimate reasons why people want to own a weapon in this society, including personal protection, we in Socialist Alternative have also directly posed the question of whether the present situation is in any way in the interests of working people. The history of mass shootings is enough to show that the prevalence of guns in U.S. society is not a positive thing for the vast majority of people.

But we also reject the idea that only the state can be trusted with weapons. The history of police and military interventions is one of attacks on unions and civil rights organizations, of spying, provocations and as we have seen in too many instances, the ability of the police to shoot unarmed suspects, particularly people of color, without consequence. Peaceful political protests such as Occupy and demonstrations against corporate politics have been attacked by the police, and undemocratically infiltrated by police agents and provocateurs.

When communities have exploded in anger against police brutality as in Ferguson and Baltimore, military equipment has been deployed that like assault weapons, were developed for use in a war — except that as troops returning from Iraq and Afghanistan have pointed out, in a war there are clearer rules of engagement. Both fully peaceful demonstrations and those that have destroyed some property have been attacked, beaten, pepper gassed and the participants pursued using legal and legislative measures against the right to protest.

But the enormous number of military-style weapons that are available in the U.S. present a clear and present danger to working class people and youth. A majority of young and working class people agree that we need reasonable limits on the type of firearms available, and also restrictions on the ability of people with a history of violence and threats of violence to have access to them.

Socialists support some limitations on access to guns, and the types of guns that are available, as a public health measure. However gun control measures will clearly not solve the problems of poverty, inequality and alienation that underlay gun violence and measures to sharply curtail the guns already in circulation would require a massive police intervention of a kind which few would support.

The Role of the NRA

It is very important to see that this emerging movement of students and teachers is not only demanding restrictions on the type and availability of firearms. It is also very clearly directed against the gun lobby, specifically the NRA, the arms manufacturers and the right-wing politicians they support. Some of the sharpest attacks have been directed at President Trump. This is a president who was enthusiastically endorsed by the NRA and is clearly out to encourage bigotry which encourages violence; the whole tone of this administration gives justifications for violence and in his campaign meetings he encouraged violence against anyone who heckled him.

The NRA is a multi-million dollar corporate lobby for an industry which, like other polluting and dangerous industries such as tobacco, asbestos, oil, coal, gas, and agro-chemicals, seeks to block legislation and prevent research into measures that might protect humans and their environment from their products in order to protect their profits. We don’t accept that the NRA exists to protect gun rights. In fact it has a well documented history of ruthlessly advocating gun control as part of repressing the black freedom movement.

As we pointed out in our previous statement on the question of gun control, the NRA which claims to have over four million members, “is also driven by a right-wing libertarian ideology that promotes a particularly reactionary version of individualism. Currently it is used in the interests of the gun industry and to mobilize for ‘gun rights’ as one of several issues that provide cover for the right wing of corporate America to pursue its anti-working class agenda (along with opposition to abortion, immigration, etc.). But we should be clear that while the NRA and its backers currently promote the idea of individually armed citizens and not militias, at another stage a significant part of their heavily armed base could be turned into an overtly counterrevolutionary force to terrorize left-wing activists, workers in struggle, people of color, immigrants, and LGBT people as an auxiliary force to the capitalist state.”

One of the NRA’s standard responses to massacres like the ones in Las Vegas or at the First Baptist Church in Sutherland, Texas or school shootings, is to say that the answer to “bad guys” with guns is to arm the “good guys” to the teeth. In a society where the idea of collective solidarity has been so severely undermined and where individuals feel helpless this unfortunately has an effect. In Florida, there is now serious discussion about arming teachers in the classroom. We reject this approach which will only tend to worsen the climate of fear and violence.

The students are correctly pointing to Trump and the NRA and saying, “if you can’t fix this you should get out of the way”. They are correctly pointing to the corrupting influence of corporate money. But this applies not just to the Republicans but to the Democrats as well. The Democrats and their allies will naturally seek to turn these events into a further argument that the key issue is to vote for them in November. But we need to insist that the only way to defeat Trump and the right is to build a mass movement based on a program that speaks to the needs of ordinary people. The revolt of youth against violence and political corruption can be the spark to reignite the movement.

The Women’s March Youth EMPOWER who launched the call for a national 17 minute walkout on March 14 by students and teachers and said in a statement “Congress must take meaningful action to keep us safe and pass federal gun reform legislation that address the public health crisis of gun violence.” This is a good formulation which points further than simply gun control: it’s pointing to the need for far more resources in the schools to treat people with various issues.

There is a growing body of documentation about the failures of the social service and mental health systems to give the accused shooter, Nikolas Cruz, the help that he needed growing up — he was diagnosed as developmentally delayed at the age of four and was identified many times by the school and state child welfare agencies as someone who needed this help. This goes to the heart of the question of the U.S. as a dysfunctional, alienated uncaring society, whose corporate bosses push an ideology of “every man for himself” to cover their agenda of profit at any cost.

A socialist program for safety in schools would include the following: