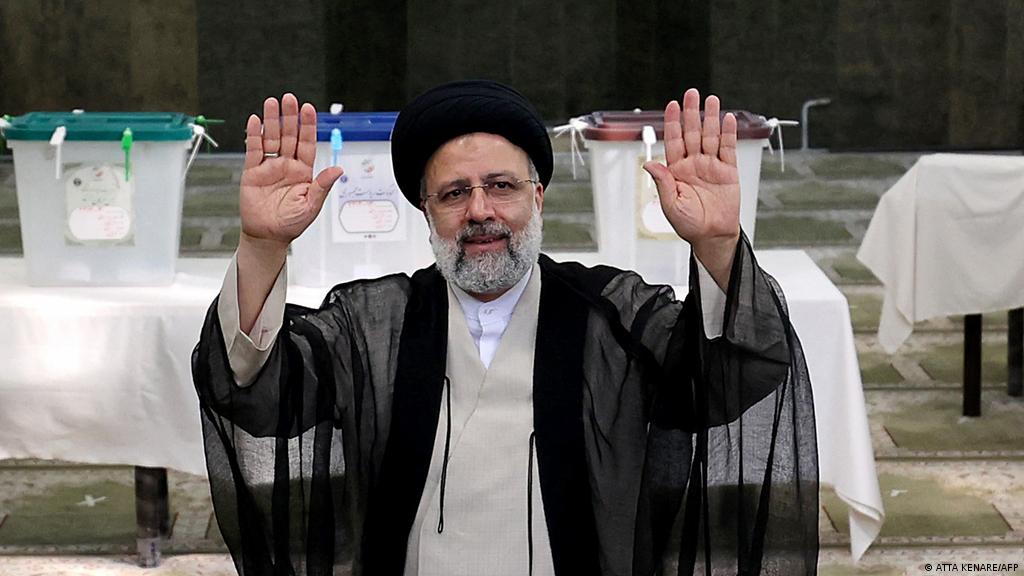 June 18’s presidential election in Iran saw a historic low turnout of under 50%. As candidate of the clerical elite representing Khamenei and the hardline Islamic Revolutionary Guard Corps (IRGC), Ebrahim Raisi’s presidential term will be a crucial time for both the regime and the Iranian working class as there is the real possibility of new mass uprisings with the real potential to overthrow the political and economic system.

Like other elections in Iran, this one was mainly a propaganda show. It’s getting clearer and clearer to the masses that they have no choice within this system. This is why again this year demands to boycott the elections gained wide traction with, for example, families of those activists and youth arrested and killed in November 2019 supporting the call in the last days.

Raisi’s election is an expression of the political and economic interests of Khamenei and the IRGC as the country moves towards an era of instability and economic crisis. It was clear from the start of the election campaign that the ruling class is preparing for new protests. They removed any candidates having “reformist” or “moderate” tendencies from the election to make very clear that the next president will be a hardliner, who will be willing to once again brutally react to any kind of revolts or protests from below. The widespread disqualification of candidates in the run-up of the election caused surprise and even shock even amongst supporters of the regime. The government did not promote the importance of the election as it would have done in previous periods.

Many people did not understand why the regime acted in this way, as it seemed the approach could increase the alienation of the masses from the ruling system by eliminating any kind of “opposition” and thus exposing the undemocratic reality of the elections. But that wasn’t a “mistake” by the regime, but a very conscious strategy to avoid even the slightest risk.

A further factor is that there are certain hopes within the working class and poor that the end of the Trump era could have a positive effect fed by the Biden administration’s desire to restore the nuclear deal, and maybe even remove the sanctions which have had a disastrous effect on the economy in the last years. The hope that international relations could be normalized would have been reinforced under a new reformist presidency. Rouhani’s approach towards Western imperialism and his attempt to generally “open” the country’s economy to a certain extent always stood in contradiction to the economic interests of the hardliners and the IRGC. This is now expressed by the regime’s strategy regarding the presidency.

The regime in deep crisis

Khamenei himself is concerned with the survival of the regime, which has been rocked by nationwide protests several times in recent years. He and the IRGC want to ensure that ultraconservative forces hold all the strings when appointing his successor in coming years. In his speech to the nation two days before the elections, he made very clear “the people’s support of the system must be shown to the enemy”. Using general anger over US imperialism he appeared to be almost begging for votes.

The IRGC are not only Khamenei’s most important arm, they are the most powerful political, military and economic force in the country in general. The IRGC acted very offensively, putting forward their own candidates in the city and local elections held on the same day, knowing that the outcome would be vital for the whole regime. Throughout the history of the regime, expressed time and again during Rouhani’s presidency, there have been splits and conflicts between the government administration and the supreme leader. The dominant forces within the ruling class are now trying to close this gap by ensuring that clearly IRGC-loyal forces hold the key positions of power.

The regime has been forced in recent years to make fundamental changes in its policies, most importantly by focusing on expanding its regional influence, investing in the nuclear project, and by attempting to strengthen the international ties with imperialist forces. This approach has been necessary to maintain the regime up until now. However, this has also meant increasing tensions within the regime reflecting the different interests of the ruling class.

Politically and economically, the country is in deep crisis, which will sooner or later put mass struggles back onto the agenda. Four million people have fallen into poverty in the last 10 years, unemployment is at 20% and rising. With oil revenues plummeting and foreign loans blocked, the government had no choice but to finance its deficit by printing money, which has led to disastrous inflation. By the end of 2019, and again now inflation has reached a year-on-year level of 50%. Consumer price inflation increased to 36.4% in 2020/21. Liquidity is one of the main problems, increasing in line with the currency’s devaluation. The skyrocketing price increases are the biggest economic problem for the masses, one slogan used during recent protests was “our expenses are based on dollars while our salaries are based on rial”. And we have to remember that the last trigger point for explosive protests were price increases in gasoline and food.

The COVID crisis played a role in paralyzing the masses to a certain extent, but even during COVID, in 2020, a historic number of strike actions took place. These waves of protest not only showed the growing anger within the working class, both in cities and rural areas, they were an expression of a mood that “there is nothing to lose”. Both the uprisings in 2017/18 and 2019/20 expressed a turning point in the struggle against the regime. They showed the explosive situation and how the regime has lost an important social basis in the last years.

Raisi’s bloody past and present

Raisi stood in the Presidential election in 2017, which took place under different circumstances, but the factor that remains is his unpopularity. He symbolizes the desperate decline of the regime, which is showing its ugliest face in these times of crisis.

Part of Raisi’s history is the bloody massacre of 1988, when thousands of political prisoners were murdered within a few months. Back then, Raisi as a young lawyer was part of the “four-man-committee” administrating the executions. But he doesn’t only have a bloody past, in the last years as Chief Justice he was responsible for several arrests and executions, mainly in the aftermath of the 2019 protest wave. Then hundreds of young and working-class people were arrested and are still imprisoned. Many were killed.

Raisi was appointed by Khamenei in 2016 to head the powerful “Astan Quds Razavi” foundation, which oversees the affairs of the famous Imam Reza shrine in Mashhad — one of the most important shrines in Iran. The foundation not only has religious and political power, but also receives enormous sums of money, which are invested in various projects. It owns real estate, land, and companies in various fields, such as construction, tourism etc. It is often described as a “state within the state”. That means whoever heads such a huge foundation also runs an economic empire. So as one of the most powerful and conservative men in the country, Raisi will surely play a big role in making the ultra-religious forces and IRGC even richer. The working class, particularly the young generation, knows Raisi’s history very well. This is why he could be one of the most hated figures as president.

Clearly, Raisi’s presidential term will be dominated by enormous polarization, economic hardship and growing struggles. It is clear that more repression is on the agenda, as well as his plans to retreat to stronger isolation from Western imperialism. In the context of the new cold war this will be strategically important, especially for Chinese imperialism. With the new deal between China and Iran this path has already been marked.

It is not clear what Raisi’s presidency will mean concretely for the nuclear deal, since so far he has made no attempt to stop the negotiations, which doesn’t mean that his rule will not be a complicating factor. It is also likely that Raisi’s hardline agenda could lead to bigger regional conflicts & escalations — particularly in the context of difficult domestic policies, but that will depend very much on the political developments and the class struggles throughout the region.

The main task of these elections, to consolidate the regime as much as possible, will sooner or later reach its limits. Obviously, working class struggles are on the horizon — there has not been a single “calm” day in recent years. Countless struggles by different sections have taken place time and again over different economic and political issues: By workers, women, teachers, retirees, political prisoners and others.

A few weeks ago, the sugar company Haft Tappeh was re-nationalized after years of struggle and workplace action, organized by an independent trade union, which is not enough to sustainably achieve better working conditions and higher wages, but is an important expression of how struggles can be won. This victory will have an impact by increasing the self-confidence of workers, not only the combative Haft Tappeh workers, but of the working class in general.

In previous years, the regime was to a certain extent able to violently suppress and isolate the different struggles that took place. It will be crucial for the working class and poor in coming years to not only generalize the economic and political struggle against the regime and Raisi, but also to politically organize as effectively as possible in the underground, build revolutionary forces that are capable of offering an independent, socialist program to not only overthrow the regime but also the capitalist system.

International Socialist Alternative sees its role as assisting the development of socialist ideas, organizing international solidarity with the Iranian working class and to help building such a force in the coming period. Join us.