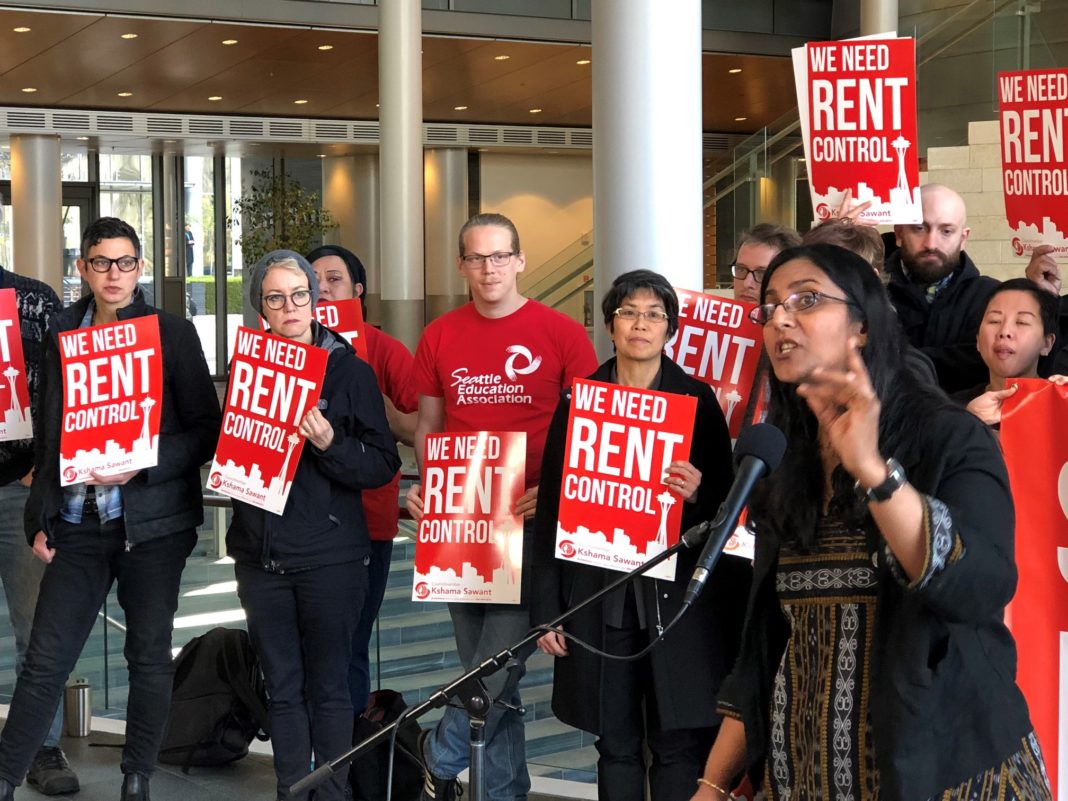 After a few months of declining apartment rents during the worst of COVID, Seattle’s corporate landlords have wasted no time in resuming steep hikes in the cost of housing. This will only further accelerate racist gentrification and economic evictions. Since January, they’ve jacked up rents a staggering 9 percent, pushing yet more working people out of the city.

Seattle is now the 5th most expensive city in the U.S. At the same time, unemployment levels in Washington are “similar to levels during the ‘Great Recession.’” All in the context of the most regressive tax system in the country. With the hard-won eviction moratorium expiring on June 30, all of this amounts to a nightmare scenario for renters and small businesses. What happened to us all being “in this together?” The truth is we never were.

Racist Nature of the Rental Crisis in Seattle

The ongoing rental crisis has a disproportionate impact on people of color, the elderly, and low-income renters – reinforcing historic inequities. Racial inequality is extremely severe in Seattle, where the median Black household income is 2.6 times lower than the average white household (giving Seattle the 8th highest level of disparity of the 50 largest US cities). In addition, Black Seattleites are three times as likely to be unemployed and roughly two out of three are rent burdened – higher than the already incredibly high general average.

In the city’s Central District neighborhood, we’ve seen how profit-hungry developers have driven a housing policy that has turned the historically 70% Black neighborhood to less than 20% Black residents over the course of the last 50 years. Yet the Democratic political establishment on both the city and state level has done little to put a stop to racist economic and housing policy in Seattle over that period. While they may oppose racism in words, they in fact give carte blanche to corporate developers to continue to drive our Black neighbors out of the city.

The housing crisis will not resolve itself. The shameless profiteering of corporate landlords shows why the “free market” has failed, and will continue to fail, working class renters. And it won’t change in the future unless we set limits to rents, because corporate landlords are in the business of making money, not housing people affordably. That’s why Kshama Sawant’s socialist council office in Seattle is introducing rent control legislation and building a movement to win it.

It won’t be easy to win rent control legislation, but we have won incredible victories over the last several years by building powerful movements. This includes the right to an attorney for any tenant facing eviction, the eviction moratoriums, the cap on exorbitant move-in fees, anti-slumlord laws, and of course last year’s historic Amazon Tax to fund affordable housing and homelessness services. In a situation where, before the COVID crisis and the capitalist recession of 2020, 46% of Seattle renters were already classified as “rent burdened,”  we need rent control now more than ever!

In addition, we are introducing a series of bills calling for a number of equally important, immediately implementable and desperately needed policies for renters and small businesses. These include increasing the notice of rent hikes from 60 to 180 days, requiring landlords pay relocation services if they try to economically evict tenants, and rental, mortgage, and utility debt cancellation for all struggling renters and homeowners. We need to send a clear message to big business and the political establishment: we will not let you force the cost of the COVID and economic crises onto the backs of working people.

We’ve been told rent control in Seattle is not possible. They also told us a $15 an hour minimum wage was impossible, but we built a movement and won. A year ago, Mayor Durkan said about the Amazon Tax, “that never is going to happen.” But we fought and won it a few months later. It is clear that when the political establishment says something is “impossible,” what they mean is “it’s bad for my big business and big developers friends.” While we won’t win every battle, we know that when we build vibrant, grassroots movements, we can overcome huge obstacles.

And that’s the type of movement we will need to win rent control – a united movement of working class renters and homeowners. Strong housing policies and renter protections don’t just benefit renters but homeowners as well. Gentrification not only drives up rents but also drives up property taxes on working and middle class homeowners, driving them out of their homes.

Our movement held a press conference on rent control in the Central District, which is in many ways ground zero in the fight between profit-seeking corporate landlords, on the one hand, and working class renters, homeowners, and struggling small businesses on the other. There you can see very plainly the “tale of two cities” that is playing out. On one side of the street you have the Liberty Bank building, a new affordable housing project built with public funds where one bedroom apartments go for $1,180 a month. On the other side, there are two for-profit housing complexes run by one corporate landlord. Rents range from over $1,500-2,400+ a month for the same one bedroom sized apartment. What possibly could be the difference? Profit.

While the Liberty Bank building was built for people not profit, the other two were built purely for corporate landlord greed. The staggering differences here show what could be possible with a just housing policy. This includes not only rent control but social housing, high quality affordable housing built with public funds. For example, this could be paid for by expanding the Amazon Tax.

By taking the profit motive out of housing, we can stop the massive displacement that is happening in places like the Central District. It would allow those who have lived in Seattle all their lives to continue to live in their own neighborhoods while still taking in those, particularly young people, that hope to add themselves to the diversity of our city.

It is in no one’s interest except big business and corporate landlords, who use the skyrocketing housing prices to line their pockets, to let this housing crisis continue. But these interests have a powerful sway among the Democratic political establishment, which is why these same politicians tell us that things like rent control are an impossible pipe dream. But as famous French author Victor Hugo once put it “Nothing else in the world is so powerful as an idea whose time has come.” Rent control’s time has come. It became law in the state of Oregon in 2019 and a number of other states and cities are considering it now. It clearly has momentum.

But momentum is not enough. We have to get stronger. We need to build a united movement of working and middle class renters, homeowners, and small businesses to take on the might of the corporate and political elite. That’s why we are now beginning a campaign to collect over 20,000 signatures of Seattle residents to support Kshama Sawant’s new legislation for residential and commercial rent control in addition to a slew of other tenant protections. If we fight, we can win – join us!