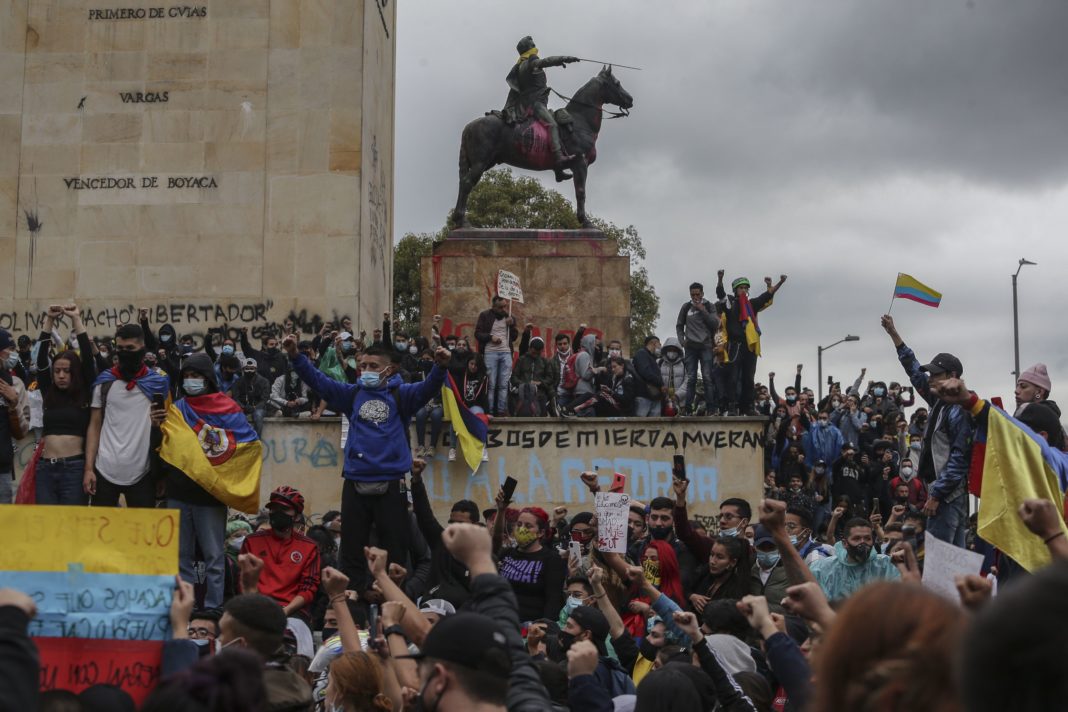 On the 28th of April the Colombian masses took to the streets. Hundreds of thousands answered the call for a national strike despite the threat of the pandemic and the restrictive lockdown measures currently in place. It is very likely that, without fear of the pandemic, that number would have reached millions.

This is the return to social mobilization that had stopped after the end of 2019 due to the onset of the COVID pandemic. Yet the economic slowdown has only made the situation for the working class more desperate than it was in the run up to the November 2019 strikes. Called by the workers’ organizations and social leaders, these paralyzed the country for days and provoked brutal repression by state forces.

As it stands, the current government has little support outside of a very small portion of the population comprised mostly of ultra-reactionary petty bourgeoisie and the richest capitalists. But these are prepared to do anything to hold onto power, whatever the human cost.

The trigger for the current protests is the proposal of a tax reform by the current government of president Iván Duque, member of the extreme right party Centro Democrático (CD). This comes on the back of a series of neoliberal packages in 2018 and 2019, the latter of which triggered a mass revolt that shook the country.

The new reform was cynically named the “Sustainable Solidarity Law” introduced to combat a fiscal deficit that ballooned during the pandemic. The government shamelessly attempted to conceal its anti-working class nature by introducing some articles that would guarantee returns in the forms of subsidies to the poorest of the population.

In Colombia, a person is considered poor when they earn less than 168 dollars per month. According to those metrics, that comprises 67% of the population. This tax reform seeks to finance additional monetary support for the poorest 18.8 million, extracted from the so-called “middle class,” the majority of which are workers who themselves are struggling to survive.

From this section of society, an extra 7.2 billion USD was expected to be extracted. The methods for achieving this sum are twofold. First, there will be a lowered threshold for income tax: anyone earning above 690 USD per month will have to start paying income tax, down from roughly 940 USD as it was before. But second and more concerning is the introduction of a Value Added Tax (VAT) for many products of basic consumption, among them chicken and eggs, two staples of Colombian working class nutrition.

What Can Colombia Afford?

Despite the hue and cry about lack of funding for the State, the CD government had no qualms in increasing the funding for state repression. In the middle of the pandemic, the presidency decided to purchase fighting jets from Lockheed Martin for the amount of 4.5 billion USD, and glyphosate from Bayer for 2.2 billion USD, following US president Biden’s call to restart the coca plant eradication efforts. There might not be enough money to keep the masses from going hungry or homeless but there is enough to poison them or finance warmongering against the neighbouring country of Venezuela.

Although there was a measure of monetary support for the poorest during the pandemic it was delayed and only came in the wake of public outcry with reports of families starving during lockdown. Even this was not enough. What’s more it was delivered in such a way that the banks could profit from it through third-party transactions with the private sector.

And now the bulk of the Colombian poor pay the price for the crumbs that the government graciously granted the masses. This bill posits that it will be the diminished working class, in a country where about half the able-bodied population are unemployed, that fills the depleted coffers of the state, instead of the rich who hold most of the wealth and land in their iron grip.

The National Strike and State Repression

Despite the low union density in Colombia, it was the unions who took the lead and called for the 28th of April to be the national strike day. Ultimately this came as a result of pressure from the rank and file, reflecting a generalized discontent at the intolerable situation facing the working class and poor. Iván Duque was already experiencing record lows in terms of popularity.

The strikes were massive, and there were demonstrations even in the most conservative areas within the country. This went beyond the expectations of everyone including the union leadership who had predicted a sparse presence of people on the day. But against every prognosis each city saw thousands to tens of thousands of people take to the street to protest peacefully.

Yet no peaceful protest is good enough for the brutal repressive policy of the “most stable democracy of South America.” On the morning of the 28th one man was killed by a policeman and at least 4 more followed that day alone.

The mobilizations have continued since then. The official number of civilian deaths now stands at 26 although the actual figure is likely much higher.

There are reports of dozens disappeared and many more wounded. While the numbers are unclear, one thing is certain: the epicenter of violence is in Cali, the capital of the Valle del Cauca province. There, many have been injured by the police, who have been shooting not just rubber bullets but also live ammunition, as well as firing tear gas into residential areas. Despite the government’s apparent concern with people taking to the streets during a pandemic, the police have had no problem taking anyone — regardless of age — to sports centres and overcrowded stations where they have detained them unlawfully.

Senator and former president Alvaro Uribe Velez, founder of the CD party and arguably the most powerful politician in Colombia, called for the police and the army to use their guns to “defend people and property from terrorist vandalism” for which his twitter account was suspended. But the mood had already been set. On the 1st of May president Iván Duque appeared in front of the cameras with the commander of the Colombian military to declare that the army would join the police in “restoring order” and “protecting the integrity of the people.”

That thinly veiled threat was not enough to dissuade the Colombian masses, and if anything it motivated more persistent demonstrations from wider sections of society. Support for the protests remained high and people tried to avoid unnecessary confrontation, outing and rejecting agent-provocateurs.

Even those who dare not come out have been standing on the balconies and the windows and beating their pots and pans as a sign of support. As Colombia is enduring one of the world’s worst Covid situations, many have remained indoors. Now, with victims of police brutality pouring into hospitals, the already overburdened emergency healthcare can be expected to reach its limits.

A Setback for the Government

On the 2nd of May president Duque declared they would not push forward with the tax reform bill, and on the 3rd of May the infamous minister Carrasquilla resigned his position.

There was the expectation on the side of the State representatives and their media that this would lead to a return to normality, but the mobilization has continued. The workers, poor and oppressed of Colombia know that they don’t want the already existing neoliberal policies such as the two previous tax reforms, and they’re going to the streets to demand change.

Of course the movement is not just about this specific bill but the continuous attacks on workers and the poor over a whole period. Those protesting the reform bill are also conscious of the upcoming attempt at passing a healthcare reform which will complete the privatization of the system and will give the healthcare providers more power to reject services or charge more: all with poorer compensation for healthcare workers. Similarly, after the scandals of the pension system, the government is also intending to push another wave of privatization for people’s pensions.

All of this is in the people’s minds when they remain on the street, and besides, a statement promising the removal of the bill does not equal the act itself. Given that the government is intent on passing a tax legislation, this only means that they will draw up an even more opaque project that will take weeks to disentangle, like on previous occasions.

A Persisting Crisis: No Capitalist Way Out of Colombia’s Economic Failure

Colombia’s economy is one based on debt. It is sustained through IMF loans which contain neoliberal demands for the country to follow, and in turn these make it ever more difficult for the economy to properly recover in the long run. Even if before the pandemic the country saw an upturn in GDP, that was little more than the further predatory financialization of people’s lives. This was reflected in the increased earnings for big businesses, with no sizable equivalent growth in the realm of production.

The country is run at the behest of the big landowners, the bankers, and the big industrialists — the latter provided with numerous Free Economic Zones under the dubious assumption that they will invest back into the community — and last but not least, the drug cartels, who are closely linked with those three sectors one way or another. These help themselves to the lion’s share of the state coffers through state contracting with very little oversight.

Colombia’s main export is raw materials. There is little room for the country to become competitive with other nations which are better situated to provide the conditions for large-scale industrial production. This is accentuated by the faithful adherence to the neoliberal doctrine since it first became mainstream within the sphere of U.S. influence.

There is no hope for an economic recovery under the current conditions, and no amount of repressing the working class in order to incentivize foreign capital will change that.

Capitalism provides no way forward in Colombia, neither in its current form or through social-democratic reformism. The Colombian masses understand the former, but also have high hopes for the latter in the figure of Gustavo Petro. The former member of M-19 (a left-wing urban guerrilla organization) now seems to be the most likely person to win the next presidential elections with his movement “Colombia Humana.” He could become the first left-wing president in the entire history of Colombia. But the Colombian working class cannot have illusions in governmental reforms fixing the intrinsic problems of global capitalism. Only an organized movement of the working class, armed with a socialist program, can break with imperialism and capitalism, the real source of the poverty, exploitation and oppression that plagues the Colombian masses.