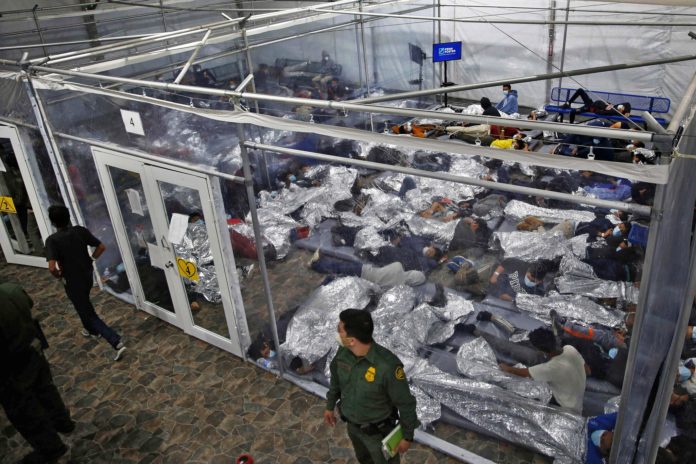 On his first day in office, Biden signed seventeen executive orders, including a handful related to immigration. While many activists and civil rights groups at first celebrated this initiative and Biden’s claims that immigration reform would be a top priority, the veneer has faded as deportations continue and children remain stuck at the border separated from their families. Most of what his administration has accomplished thus far is simply undoing some of the immense damage done by Trump. However there are components of Trump’s immigration policy that Biden has quietly continued, such as his invocation of Title 42, a section of the Public Health Safety Act that allows the U.S. government to block non-citizens from entering the country when it is in the “interest of public safety.” He’s carved out some exceptions to this, but the crisis at the southern border has continued.

Immediate action is needed to roll back Trump’s attacks and alleviate the suffering of immigrants at the border and in the U.S., and yet Biden has argued that acting too quickly is “the last thing we need.” Biden’s approach to the wave of Central American immigrants at the Southern border is wholly insufficient and does little to address the dire conditions causing people to flee their homes in the first place.

In his first few weeks in office, Biden ended the travel ban on people from majority-Muslim countries, preserved and fortified the Deferred Action for Childhood Arrivals (DACA) program, ended construction on the border wall, and reversed Trump’s executive order that defunded sanctuary cities.

While welcome, many of Biden’s orders are vague about how they will be implemented. For example, Biden’s executive order to reunify families establishes a task force to look into the issue with no particular timeline, and there is no guarantee that families will be allowed to stay, meaning they could be at threat of immediate deportation and separation, again.

Biden has also introduced the U.S. Citizenship Act of 2021 as an attempt at more fundamental change to the U.S. immigration system. This act would provide a pathway to citizenship after eight years for an estimated 11 million undocumented immigrants, so long as applicants pass background checks, have paid their taxes, and arrived in the U.S. by Jan. 1, 2021. The proposal will also provide an expedited path to citizenship for farm workers and DACA recipients.

Biden’s proposal is part of a long-term project dating back to the early 2000s of immigration reform. The current archaic immigration system blocks and sends away many people at the border. Those that do enter the U.S. face extreme exploitation and constant fear of deportation. This allows corporate America to manipulate fears of deportation to pay extremely low wages to workers doing grueling work in unsafe conditions who have no legal recourse. This drives down wages overall, which is used strategically by the ruling class to pit immigrants and U.S. born workers against each other.

While corporate America benefits from the status quo, it is also largely in favor of immigration reform. The U.S. Chamber of Commerce and major corporations have supported reform for years. It is in their interests to know who all the undocumented immigrants in the country are and regularize their status. At the same time, the extremely long path to citizenship with many obstacles locks people into a second class status with no real protections, allowing for their hyper exploitation by corporations.

Biden’s legislation aims to increase the number of immigrant workers, appease big business interests, and lock immigrants into an eight year journey with endless hoops to eventually earn citizenship. This is all part of their project to drive wages down while undermining working class solidarity.

For example, the Act eliminates per-country quotas on visas, which will specifically aid Indian immigrants who make up the lion’s share of visa holders in the U.S., and many of whom migrate to work for tech companies. These very companies, like Google and Facebook, have been lobbying for this reform to guarantee an influx of highly skilled, exploitable workers.

Biden’s proposal echoes much of the 1990 Immigration Bill signed by Bush. The act increased caps on immigration and introduced five employment-based tiers, which were used to prioritize and administer visas to certain strategic groups of workers from the perspective of U.S. business interests. Like Biden’s proposal, this helped technology companies expedite worker visas for immigrants who had “extraordinary” skills. In providing a “path to citizenship,” Biden will create a third-class status for millions of people and continue to divide the American born working class and immigrants. Biden’s stance is clear: immigration reform on capitalist terms.

These have always been the terms of the U.S. immigration system. In the late 1800s and early 1900s, the U.S. took advantage of the large waves of immigrants coming to the country, overwhelmingly from Europe, and enacted an “open door” policy. The Rockefellers and Carnegies were desperate for an exploitable workforce in the country’s emerging industries. They gladly took advantage of immigrants by paying them less, forcing them into overcrowded, dilapidated housing, and whipping up anti-immigrant sentiment to pit them against U.S. born workers.

The U.S. ended its “open door” policy as WWI ended and the numbers of the unemployed and economically desperate soared. U.S. nativism was also on the rise, and the ruling class took advantage of this by enacting stricter immigration policies and whipping up xenophobia to cut across the revolutionary left and militant labor movement that was growing during this time. This included implementing quotas to keep certain ethnic groups out of the country.

A new wave of migration began again in the late 1980s as a result of neoliberal policies championed by Republicans and Democrats alike. These policies economically decimated Latin American countries, forcing millions to seek work and better conditions in the U.S. The 1994 North American Free Trade Agreement, signed by Bill Clinton, devastated the Mexican agriculture sector and was one of the reasons for the massive influx of migrants from Mexico in that period.

This created new pressure to reform the system and allow greater control over immigration at the southern border. George W. Bush attempted to do this in the earlier 2000s, but was blocked by the anti-immigrant wing of the Republican party. This wing became a very important part of Trump’s coalition. As the long-term impacts of neoliberalism continue to wrack Mexico and Central America, the crisis at the border drags along, with untold suffering among immigrants and asylum seekers at the hands of the U.S. immigration system.

We need to end the neoliberal policies that force people to flee their homes in order to survive. This includes the capitalist destruction driving climate change which is a major contributing factor for migration out of Guatemala, Honduras, and El Salvador. While Biden has given lip service and promised small sums of aid to Latin American countries, his strong allegiances to business interests and U.S. imperialism mean that not much will genuinely change.

The Democratic Party has long championed free trade agreements that have devastated Latin American countries, and has violently opposed the nationalization of key industries and other measures that could lift poor and working people out of poverty. The U.S. has quite literally overthrown left-wing leaders from Honduras and Guatemala to Argentina and Nicaragua whenever they have threatened its own economic and political interests, hugely destabilizing the region.

We can’t trust the Democrats to fight for the interests of immigrants under Biden just as they failed to do so under Obama and for years before that. In Obama’s eight years, there were over three million deportations, earning him the title of “Deporter-in-Chief.” While the media’s coverage of children being detained in cages spiked under Trump, Obama’s administration built the cages and began the practice. Biden has continued the tradition in opening a new detention facility and has already deported hundreds of immigrants, despite the administration’s promise not to do so.

What Will it Take to Win Immigrant Rights?

Undoing Trump’s many attacks on immigrants is not enough to address the crisis facing those fleeing to the U.S. and facing exploitation and poverty once they’re here. An eight year path to citizenship, while a real glimmer of hope for many millions of immigrants and a real step forward from the present situation, locks people into second class citizenship while they jump through endless hoops.

We must fight for immediate, full citizenship for all foreign-born workers living in the U.S. We need an immediate end to all deportations and detention of migrants. We need to fight to expand the COVID stimulus and relief to all people, regardless of their immigration status. We need to end ICE raids and demilitarize the border, not increase enforcement. We need to fight for a genuine Green New Deal jobs program which would not only deliver jobs to native born and immigrant workers alike, but would begin the process of addressing unmitigated climate disasters forcing people out of their homes.

We need to build a united movement of immigrant workers and the American working class to fight against the ruling class and their attempts to divide us. We need a socialist federation of the Americas to end imperialist exploitation and fight for better wages and better conditions for all.

From 2006 to 2007, a mass movement of working class immigrants fought the Sensenbrenner bill, which would have resulted in mass deportations and classified illegal immigrants as felons. This movement not only stopped the bill, but also grew solidarity between undocumented workers and the broader American working class. However, the movement failed to win citizenship rights for immigrant workers which became its key demand.

Immigrant labor has always been used to drive down wages and the ruling class has always injected and whipped up racism and xenophobia to pit foreign and U.S. born workers against each other. To win real improvements in the lives of immigrants will require overcoming these divisions and fighting for the betterment of all workers exploited and beaten down by the bosses.