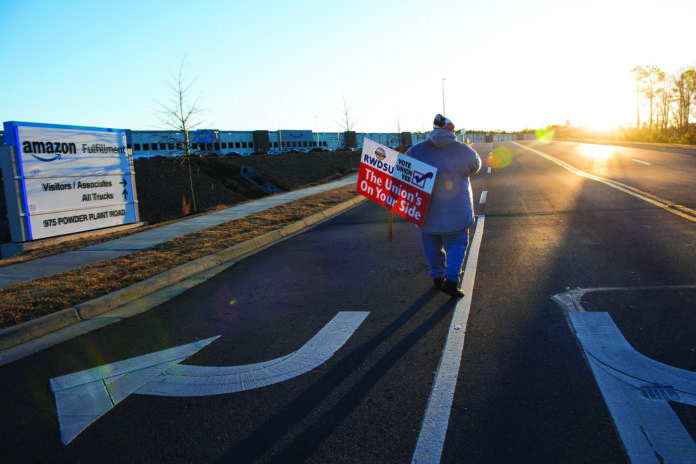 As we post on April 5, Jeff Bezos and thousands of Bessemer-based Amazon workers wait with bated breath as the results of the union election hangs in the balance. Will the union win? When will we know? What’s next if it’s a victory, a loss, or somewhere in between?

These questions aren’t easy to answer, and Amazon has made it so. If this campaign was simply a test of whether a majority of workers at BHM1 wanted a union, then there would certainly be a union. But union elections are never that simple. Amazon has spent months flagrantly violating labor law, intimidating and lying to workers, and they are now trying to suppress the vote of pro-union workers and drag the count into the courts.

Amazon’s illegal tactics throughout the campaign — like installing a mailbox in front of the warehouse in contradiction to NLRB instructions, and lying to workers about the deadline to vote — have surely had an impact. But whichever way the chips fall, Amazon has almost guaranteed a muddied-water legal battle if they don’t outright win.

Before votes are even counted, the union and Amazon have the chance to challenge each ballot received by the National Labor Relations Board (NLRB) starting on March 31, a process that will likely take at least a week. The same way that Amazon tracks every second its employees work, they tracked union sympathies. Managers even walked through the warehouse with clipboards to ask how workers voted. During the ballot challenging process, Amazon has presumably used their lists of union supporters to challenge what are likely “yes” votes.

If the union wins outright, Amazon lawyers will invent reasons to appeal if they have to. If Amazon’s months of breaking the law allows them to steal this election, the RWDSU will rightly appeal, meaning a new election months, if not years, down the line. If it’s a slim margin either way, and if there are more challenged ballots than the difference between “yes” and “no” votes, the whole thing will get appealed to the NLRB, a process that could take another few weeks.

Amazon Wants a Battle in the Courts

Amazon is leaning on the courts in the hopes that it demobilizes workers locally and nationally as they crawl through an inaccessible, confusing, and drawn-out legal process.

As one of the wealthiest corporations in the world, Amazon can pay big bucks to experienced union-busting lawyers for any stretch of time. These lawyers will use every nook and cranny of the law to delay both union recognition, and if they lose that fight, the contract negotiations that would follow. This is strategic for them because it takes the focus away from worker and community organizing, and can deflate any momentum and structures that have been established to fight for the union.

Because of all this, we need to develop a strategy that brings the struggle for the union and a contract back to the warehouse floor and the streets, where we have the numbers and our real power.

The Courts Aren’t on Our Side

Laws, labor and otherwise, are crafted by the same politicians that cut funding for our schools and our healthcare, keep the minimum wage a poverty wage, and hand out tax breaks to the billionaires. These same politicians pack our courts, and let’s not forget that three out of four current NLRB members were appointed by Donald Trump.

This month alone, The Washington State Supreme Court gave a green light to the billionaire-backed, right-wing recall campaign against Seattle Councilmember Sawant, a socialist who helped win a $15 minimum wage and a historic Amazon tax last year. In Minneapolis, Derek Chauvin is on trial for the murder of George Floyd, and while the city’s police department is conducting military training, peaceful protesters are getting ready because only one-in-three killer cops charged get convicted.

What won the Amazon Tax in Seattle, forced the Minnesota establishment to charge Chauvin, and what got us this far in Bessemer was working people choosing to fight — not stepping back and relying on our politicians or legal system to do what’s right.

On the ground in Bessemer, a dozen local unions are gathering as we wait for results to help RWDSU and the broader community build for a “Stop Amazon’s Union Busting” rally on April 11.

Union and unorganized workers across the country turned out for solidarity actions on March 20. Hundreds of union members in LA stormed the offices of Amazon’s union-busting law firm Morgan Lewis. To bring Amazon to the table for a contract fight, to get them to drop their absurd legal challenges and delay tactics, or to win a rerun, we need more of this shop floor organizing and wider labor and community support across the country.

From slow-downs to sit-ins to strikes, to national rallies and solidarity actions from other unions, this is what Amazon fears the most. Because while they rule the courts,  we make their profits, and we can make them stop too.