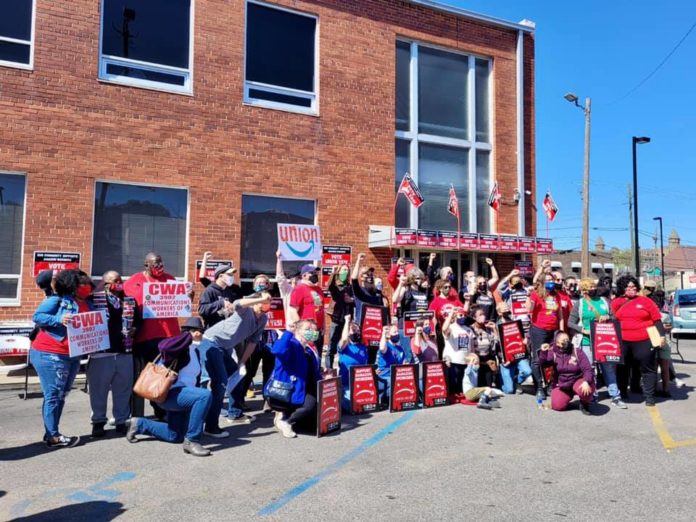 Saturday, March 20 was a national day of action in solidarity with 5,800 Amazon warehouse workers in Bessemer, Alabama, who are in the final week of voting for union recognition. Support has poured in from across the country as hundreds of Amazon workers, union members, socialists, and racial justice groups came together in front of Amazon fulfillment centers, Whole Foods locations, hubs of BLM protests from the summer uprising, and even the offices of the union busting law firm Amazon has hired.

Protesters were further encouraged by those that drove hours to participate, truck drivers and passersby honking their support, and Whole Foods workers giving thumbs up through store windows. This national movement has a message for workers in Bessemer: Your struggle has inspired us nationally to raise our expectations to fight in our own workplaces, and we have your back until the end. To Jeff Bezos: This is just the beginning.

Read reports from Socialist Alternative members on the ground in Birmingham and across the country who helped organize solidarity actions!

On Saturday, 150 people gathered in the RWDSU Midsouth Council parking lot to rally and canvass in support of the BAmazon Union. Congressional candidate, and national co-chair of Bernie Sanders’ 2020 campaign, Nina Turner helped drive turnout and ensure the press was present. The energetic crowd consisted of Amazon workers, other local union members, community supporters, RWDSU organizers, and more. Socialist Alternative’s Seattle City Councilmember Kshama Sawant made a $3,000 donation to have a local favorite, Saw’s BBQ, provide food for the event. The atmosphere was festive as the campaign heads into the final week of voting.

Eric Hall, co-founder of Birmingham Black Lives Matter, MC’d a rally which both workers and supporters spoke at. Amazon workers Darryl Richardson and Jennifer Bates spoke about the grueling and unsafe working conditions in the warehouse and why they are forming a union to fight back. Genevieve Morse, member of both Socialist Alternative and the Massachusetts Teachers Association, drove from Boston to Alabama two weeks prior to help out. Genevieve spoke at the rally about the national significance of this union drive and one of its central slogans, “Black Lives Matter at Work.” Nina Turner gave a fiery speech about the need for Amazon workers to have a union, invoking the inspiring history of the civil rights movement right here in Alabama.

Following the rally, supporters divided up into teams, with some going to the warehouse gates for a standout and others heading into the community to canvass in support of the drive and distribute window signs. Workers must have their ballots received by the National Labor Relations Board by Monday, March 29, so for the next few days the campaign’s top priority is a final “yes vote” mobilization. Socialist Alternative members on the ground are ready to do everything we can in the final week to help win the first union at Amazon in the U.S.! 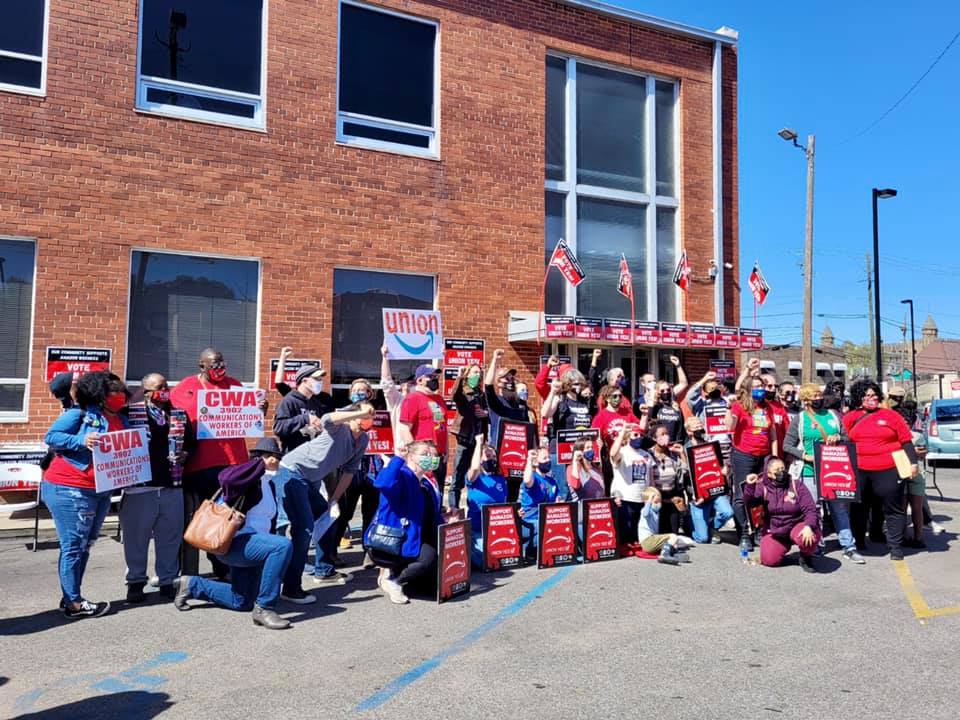 Boston SA organized a Solidarity With #BAmazon Workers standout rally outside the Whole Foods in the Ink Block. It was attended by approximately 60 people, including members of Boston SA, USW Local 8751 (Boston School Bus Drivers), Coalition of Black Trade Unionists, World Workers Party, Internationalist Group, and others. The speakers touched on the importance of union organizing, linking this to the fight for BLM and against women’s oppression, and the need to take Amazon and companies like it into public ownership. We held a moving picket outside the Whole Foods after the speeches. Workers from within the Whole Foods periodically came to the window to give us thumbs up while many cars driving by added to the solidarity with honks! 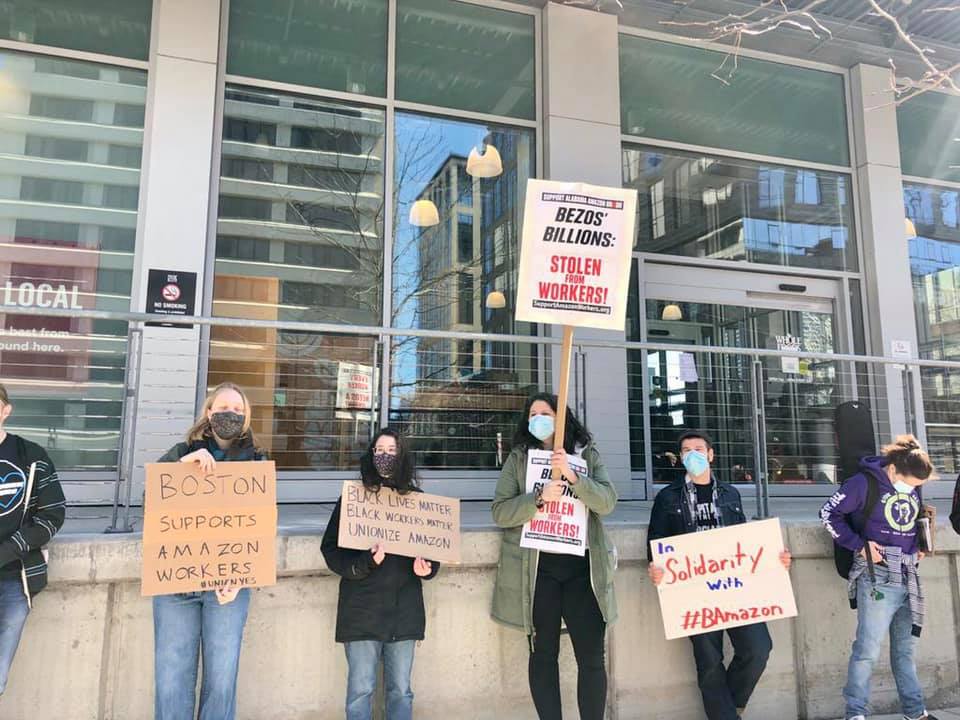 Chicago Socialist Alternative in collaboration with Chicago Democratic Socialists of America and Warehouse Workers for Justice rallied at Federal Plaza downtown in solidarity with Amazon workers in Bessemer. Speakers included 25th Ward Democratic Socialist Alderman Byron Sigcho-Lopez, Warehouse Workers for Justice representative Mark Balentine, SA/DSA Member Ryan Watson, Colectivo Coffee worker Zoe, and Chicago Teachers Union teacher Melissa Vozar, who all spoke to the importance of this union drive for all workers nationwide. The group rallied and marched to Amazon Web Services, where we aimed our rightful anger at Jeff Bezos, who has put millions into an anti-union campaign in Bessemer. Participants chanted “workers united will never be defeated!” 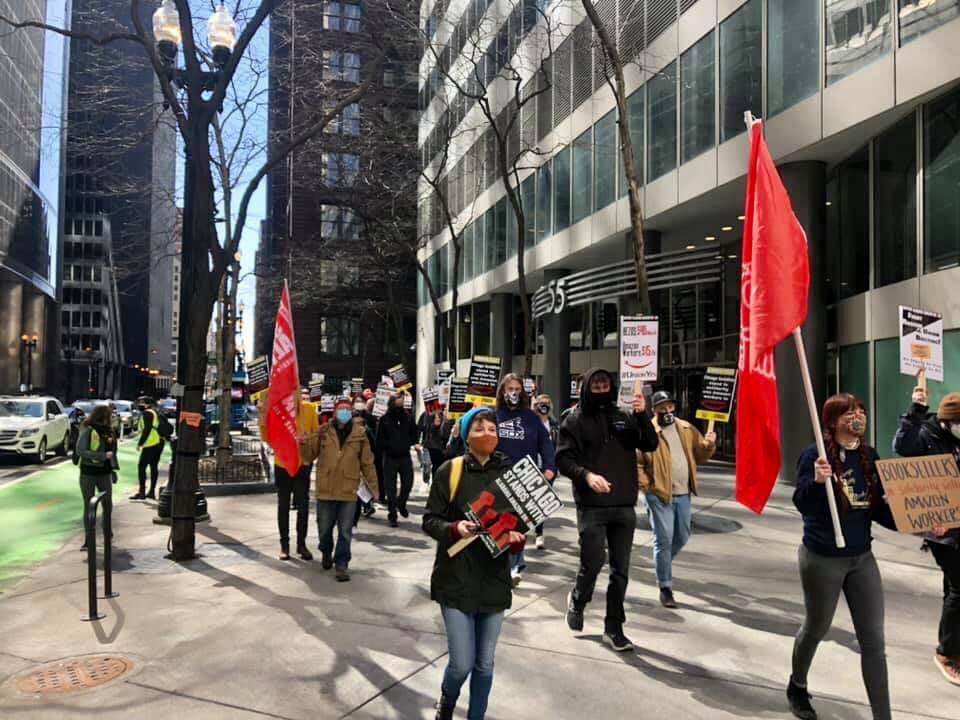 Meeting at the Amazon Locker in Clifton, Cincinnati Socialist Alternative and the Cincinnati Interfaith Worker Center held a joint event to show solidarity with the workers of Bessemer, Alabama trying to unionize at the Amazon Facility. We advertised our event on the national call to action website which drew three or four people from Dayton, Ohio and Brown County. A number of attendees from Brown County drove over an hour to get there. 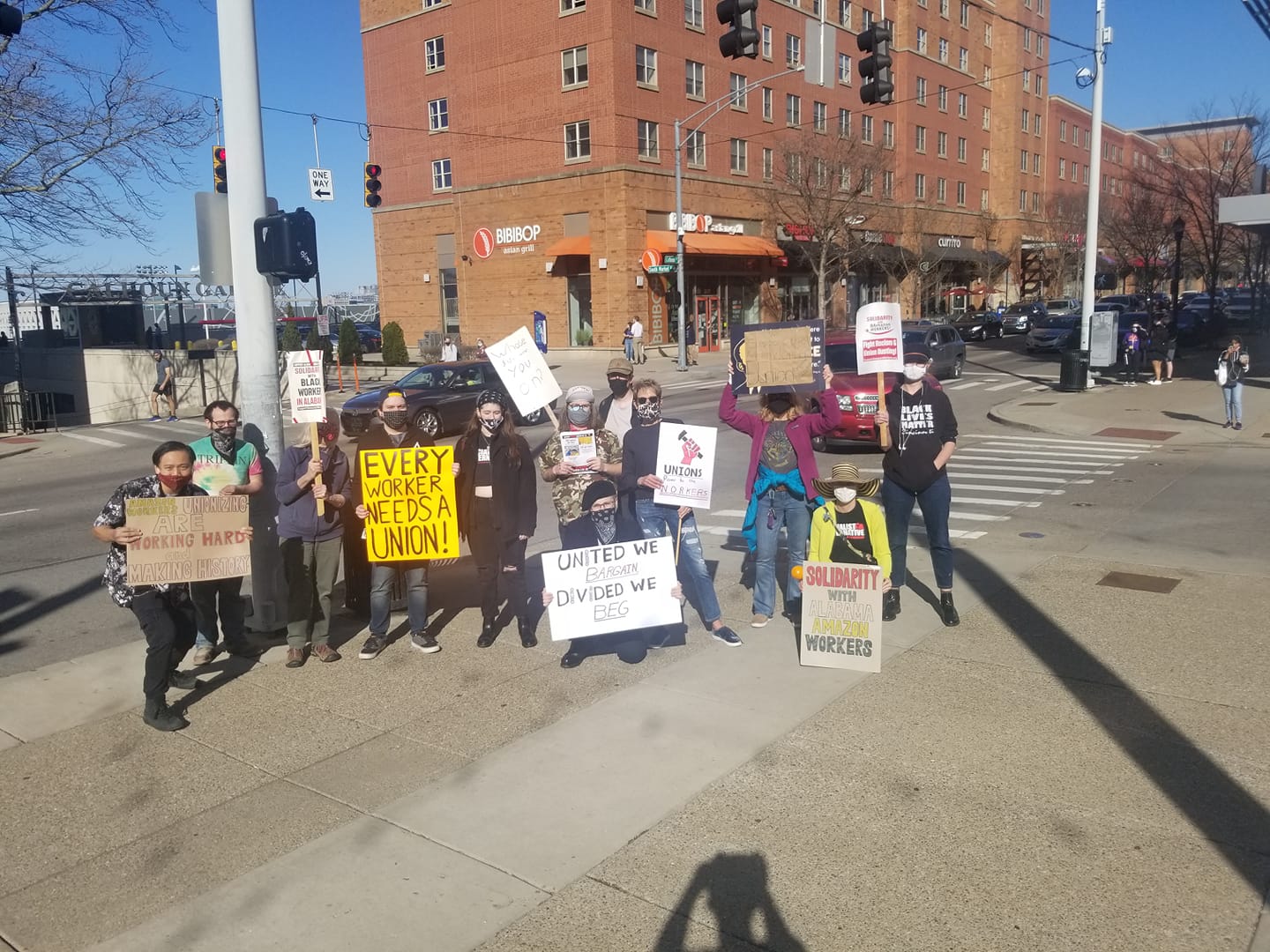 Socialist Alternative North Texas hosted a rally in solidarity with the 3/20 International Day of Action for #BAmazon workers! Attendees huddled at a nearby shopping center, then marched a half a mile to the Amazon Fulfillment Center in West Dallas. This route passed several massive warehouses and trucking companies, illustrating for all of us the sheer size of the logistics industry that is the central nervous system of today’s economy. Arriving at the Fulfillment Center, we were joined by more attendees bringing our numbers to a sizeable socially-distanced crowd of 40. More than half of those present were union members from TWU, APWU, AFT, IBEW, IATSE, and Teamsters Locals 745 and 767. Speakers from Socialist Alternative, DSA, the Teamsters, DSA AFROSOC, PSL, IATSE, Young Active Labor Leaders, and TWU spoke out against Amazon’s dehumanizing working conditions and union-busting activities. The vibrant mood of excitement was even more energized when passing trucks honked in support, seeing the large banner reading “Solidarity with Amazon Workers in Bessemer, Alabama!” The rally closed with a call to talk to friends, family, and coworkers about the Amazon warehouse workers fighting back, to pass union resolutions in support of the union drive, and for those who can to go to Bessemer and help the campaign for a YES vote!

Workers and socialists in Houston rallied today as part of a National Day of Action. Along with chants of “Jeff Bezos run and hide, the South is getting unionized” and “What’s disgusting? UNION BUSTING,” Socialist Alternative members spoke about the critical importance of unions and organizing in the workplace. A victory for the Amazon workers would be an inspiration to working people in the South and all across the country! Socialist Alternative stands in solidarity with the workers of Amazon!

In Minneapolis, Socialist Alternative called a solidarity stand-out near a Prime Shopping workplace, located near the University of MN campus. Young people in the area were especially supportive and excited about the potential lead that a #BAmazon victory could give to unionizing Amazon everywhere!

On Saturday, March 20, Northwest Arkansas Socialist Alternative held a solidarity picket in front of Whole Foods in Fayetteville. The event was co-sponsored by Northwest Arkansas $15 Now, Fort Smith DSA, and UA-Fayetteville Education Association Local 965. Our event attracted 25 participants, who came not only from Fayetteville but also from neighboring towns. Most of the participants were already familiar with the unionization efforts in Bessemer, Alabama and showed an interest in the labor movement in general. In speeches, members of SA linked the current unionization efforts to provide dignified work conditions and better wages to the Tax Amazon movement, explaining the need to tax Amazon and other big businesses like Walmart to fund social programs like Medicare for All, a Green New Deal, and social housing. 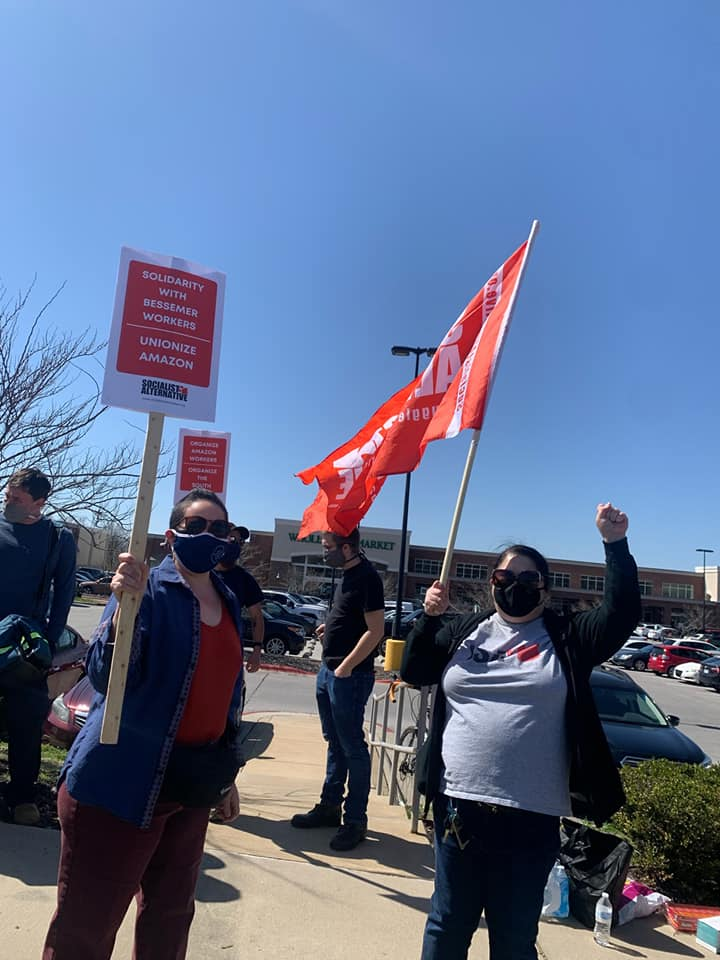 Socialist Alternative organized a rally at Barclays Center, Brooklyn, the heart of the George Floyd protests in New York City. Our members, as well as an Amazon worker and other workers spoke about building genuine solidarity with uplifting speeches about the creativity of the BAmazon workers. Links were made with struggles in NYC and the case was made for how a victory in Bessemer would lift the confidence of all sections of the working class. The energy was maintained throughout the main speeches and as we marched to Whole Foods to have an open mic. We spoke with many passersby who were interested to learn more and were enthusiastic to see the potential to take on giants like Amazon within their own communities. Members of Socialist Alternative also attended a rally of over 100 people in Harlem, led by the Coalition of Black Trade Unionists. It is clear that this struggle is an inspiration to workers and was largely seen as a first step towards increased struggle.

About 150 socialists and union activists turned out to show solidarity with the Bessemer Amazon workers. We rallied in front of Morgan Lewis – the union busting law firm hired by Amazon. Teamsters 623, TUHNA, UNITE-HERE, TAUP, LIU, CLUW were among the labor orgs that turned out. After several fiery speeches pointing to the significance of this fight “If they win – we win!“, we marched to a nearby Whole Foods to close out with statements of solidarity with essential workers and link the struggle in Bessemer. Our member Zebadiah Coombs spoke at the ending rally about the need to link labor struggles with the movement for racial justice.

On Saturday, about 35 social movement and labor activists gathered in front of a Whole Foods in a historically Black and working class neighborhood to rally and picket in support of Amazon workers. The event was organized by the New Afrikan Workers Union and attended by members of the Green Party, Socialist Alternative, and ATU local 85. We began with a rally where members of the above groups spoke in support of the union. Members of Socialist Alternative spoke about our comrades’ work on the ground in Alabama, the connection between the union struggle and BLM, and how we will have opportunities here in Pittsburgh to try to unionize our soon-to-be four nearby Amazon fulfillment centers. Following the short rally there was a picket on the sidewalk of Whole Foods with chants of “Get up, get down, Pittsburgh is a union town.”

In San Diego, Socialist Alternative took the lead in organizing a solidarity action in front of a Whole Foods along one of the city’s busiest streets. About 40 people attended and many others showed their support through honking their horns and raising fists. The event was endorsed by the local chapters of DSA, PSL, and the IWW as well as UFCW Local 135. There was a fighting mood at the event, and some attendees even drove over two hours to be there. There were speakers from the endorsing organizations as well as from UNITE HERE Local 30 and ILWU Local 29 who turned out rank and file members to show solidarity. “Our dispatch office faces an Amazon warehouse,” said the ILWU president. “We want those workers to know that we’ll have their back when they are ready.” The UFCW Local 135 organizer spoke on how the rich have accumulated more wealth during the pandemic while working people have suffered and that working people are ready to fight back. Many speakers brought up how if unions were so bad for workers, then why did Amazon and other corporations spend so much money trying to convince their employees to not join a union. One of our members who spoke, Drew, put this point succinctly. “The bosses don’t want us organizing together because they know the truth, that when working people come together, we are the Goliath and nothing they can do will stop us as long as we fight together.”

We have read about your heroic struggle for union rights and dignity against the richest man in the world. We have published reports on your struggle on our website and Facebook pages and spread awareness of your important efforts. We have also been involved in solidarity actions with Amazon workers in the Vancouver area. Your victory will be a win for workers everywhere!