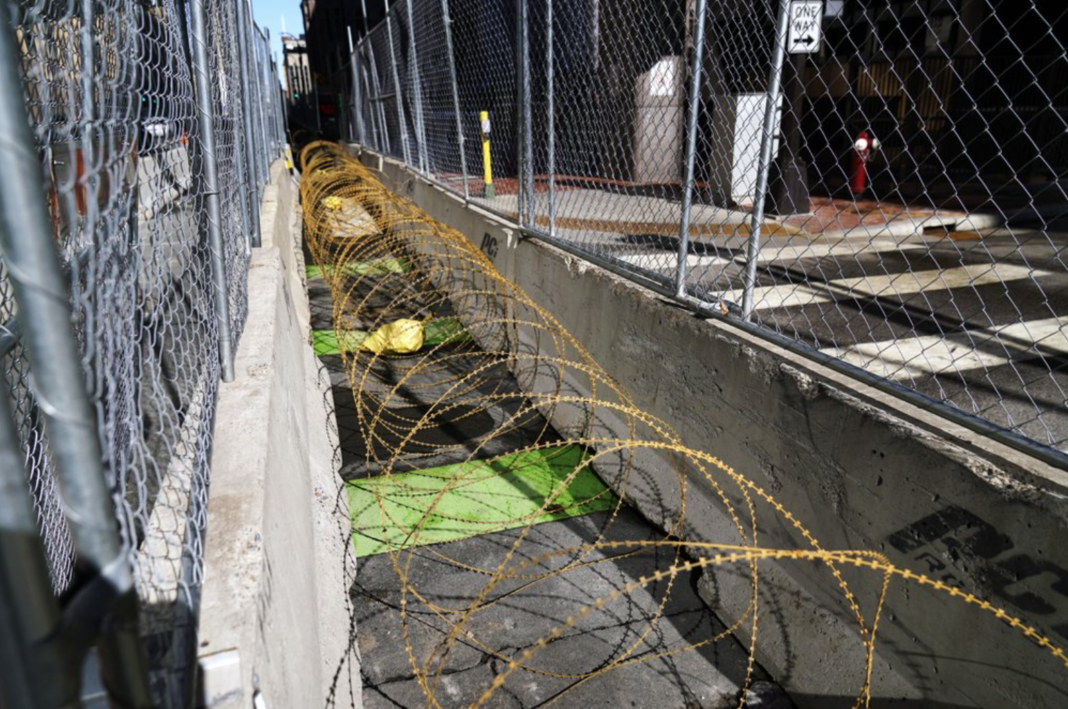 How can we win real justice?

Millions will once again be watching what happens in Minneapolis when the cop who killed George Floyd, Derek Chauvin, is tried for murder beginning this month. While the political establishment is elevating their “justice system” and calling for calm, at the same time they are setting up barbed wire, hiring more cops, and engaging in military style training to repress protests. If Derek Chauvin is convicted, it will be a genuine victory for the movement.

The worst thing we can do is sit back and watch the same process that routinely acquits killer cops to play out again. We need to remember that the reason this trial is happening in the first place is because of the Minneapolis Uprising and the nationwide —  even global — protests against police brutality last summer. Organized protests will once again be essential. The movement can further be amplified by coordinated involvement by labor unions, such as when Amalgamated Transit Union 1005 pressured Metro Transit to inform Minneapolis Police that they will not be providing “arrest buses.” A multi-racial working class movement is the best way to ensure that justice is carried out, both inside and beyond the courtroom.

Should we trust their courts?

Courts and the legal system are not friends to working-class people. This is especially the case in a police murder trial, in which the fox is guarding the hen-house. Initially in charge of the prosecution was Hennepin County Attorney Mike Freeman, whose delayed and weak charge of third-degree murder was met by wide rebuke through mass rebellion, forcing Minnesota Attorney General Keith Ellison to step in and up the charges. Furthermore, the courts are slanted in favor of killer cops — few are ever prosecuted, and only a third of those that appear in court ever get convicted. This system is rigged in Chauvin’s favor, and his potential conviction signals that the MPD finally went a step too far.

Moreover, while juries give a veneer of democracy to a system of judges and lawyers, they are carefully selected to not challenge the status quo. Juries are frequently not composed of a representative sample of the population, much less a representation of who is most affected by the outcome of such a case. (To find jurors with no prior opinions, a University of Minnesota professor even suggested looking in Hennepin County’s white, rural areas.) Jury selection, beginning Tuesday, March 9, is used to filter out certain demographics, such as people with a felony conviction, as well as people who hold certain views: potential jurors are being asked whether they participated in the summer demonstrations, possibly the largest protest movement in U.S. history! And as is well-known, anyone with an “anti-police bias,” which would theoretically disqualify 6/10 Black Americans who have experienced racist policing, can be disqualified from a jury.

Guardian columnist Derecka Purnell pointed out that Congress’ proposed George Floyd Act would not have prevented his murder. The circumstances that led to Derek Chauvin and George Floyd crossing paths that day was the allegation that someone had tried to buy something at a corner store with a fake $20 bill. This points to the large social crime of poverty, exacerbated by a pandemic in which Congress has been reluctant to help those in need. The defense, along with right-wing pundits such as Tucker Carlson, are pushing that the cause of death may have been fentanyl overdose. Regardless, this does not exonerate Chauvin or MPD from murdering Floyd, nor does it explain the thousands of other deaths of Black people at the hands of police. Additionally, this allegation even further implicates the capitalist society that has artificially created an opioid epidemic with no relief in sight. Locally, the political establishment will try to hold up the legal process to deflect attention away from their own systemic failures to address racist policing, along with a lack of affordable housing, jobs, and healthcare.

Even if Chauvin is convicted, the system that led to the murder of George Floyd remains intact. The establishment may even be hoping for conviction and then fight for lighter sentencing, resulting in a partial victory for the movement, to pad against further unrest after a year of injustice, betrayed promises to the movement, and widespread frustration with the bungled pandemic response disproportionately impacting working-class and Black communities.

Both the Democratic Party establishment in Minneapolis and St. Paul are fearful of protests and “riots.” The Government Center (where the trial will take place) and City Hall in Downtown Minneapolis are barricaded and strung with barbed wire. The St. Paul Police have been conducting military-style training in the abandoned Sears parking lot near the State Capitol — purportedly to protect firefighters in hazardous situations. St. Paul City Council was even considering an ordinance requiring a permit for any public gathering of more than five people! This reaction is all the more appalling considering that 95% of Black Lives Matter protests were peaceful, while police across the country violently tear gassed and shot unarmed civilians, including children.

Particularly staggering was how Minneapolis City Council first publicly addressed security as late as February 22, a mere week before jury selection began. The disconnect between City Council and the city government was illustrated by the botched and widely panned announcement that the city would pay “influencers” to communicate information to the public. In one revealing exchange, Councilmember Cam Gordon asked if the department had begun to integrate de-escalation techniques into their protest response. Police Chief Medaria Arradondo responded by emphasizing the need for community groups, activists, and protestors to remain peaceful. He also said that any requests for the deployment of tear gas and rubber bullets are going through him, implicitly acknowledging that MPD’s reaction last summer was out of control, but not acknowledging their routine escalation of conflict.

The jurisdictional squabbling in City Hall doesn’t mean anything to the people who will be targeted by MPD’s “crowd control” weapons. Over the summer, the police indiscriminately cracked down on entire working class neighborhoods, and targeted journalists, resulting in one photographer losing her eye. The department hasn’t reviewed any of its practices or fired any officers, and they’ve even gone further by working with Mayor Frey to demand millions in additional funding.

Since making their historic “Powderhorn Promise” to dismantle the police, the Minneapolis City Council has retreated at every turn when faced with the opportunity to actually confront Mayor Frey or the police. They unanimously approved a police budget last fall that made a mere 6% cut, and then reversed that months later, unanimously approving a measure to hire more cops. These actions stand in stark contrast to socialist Councilmember Kshama Sawant in Seattle, who successfully passed a ban on chemical weapons, took on the Seattle police union’s reactionary contract by being the only “no” vote, and put forward concrete legislation to reduce the police budget by half.

Beyond the city government, the state is working to organize a militaristic response. Governor Walz proposed a $35 million security fund for the upcoming trial, which while rejected by the DFL-controlled House, was ironically opposed by Republicans on the grounds that it’s a “bailout” for the failures of the Minneapolis political establishment. Like MPD’s violence against protesters and journalists, Walz and the National Guard have not been held accountable for their actions last summer. For now, however, Minneapolis and St. Paul are footing the bill for their unified Operation Safety Net to the tune of millions of dollars while both cities have an increasing homelessness crisis alongside growing calls for more affordable housing and rent control.

It is troubling that since May, Walz has routinely called the National Guard to stand ready to occupy Minneapolis and the FBI is also deploying intelligence units, purportedly to watch out for white supremacist violence. However, with no oversight, these same state and federal forces can surveill activist coalitions and re-occupy the city once again. Despite numerous rumors, the FBI didn’t intercept any white supremacists last summer. This system can also be readily used against other protests, like Line 3 opponents fighting for environmental and indigenous justice in northern Minnesota.

We Need Mass Community Meetings to Discuss Next Steps

The movement against police brutality last spring and summer is what got us a trial and any initial cuts to the police budget, but we must go so much further to win real change to address police violence and systemic racism. Socialist Alternative advocates socially distant, weekly protests outside the Government Center to show that our movement is keenly following their legal process, to serve as a demonstration of community anger as well as a gathering place to share ideas and tactics to discuss how to broaden community support around convicting killer cop Chauvin, and also how to genuinely stop racist policing.

These protests should be democratically organized at socially distanced, open-air, community meetings across the city, which can also coordinate community outreach to build our forces, and discuss the best path forward to keep the pressure on the courts. Local unions should actively participate in these demonstrations and meetings, organizing and mobilizing members to labor contingents, and even solidarity actions and strikes like the eight minute work stoppages that swept workplaces in the summer to represent the length of time Chauvin kneeled on George Floyd’s neck.

This year, Minneapolis will elect a new City Council and Mayor. Should Chauvin be convicted, the trial of his three accomplices will be all the more tense. Their trial does not begin until August 23 and will proceed into the fall, undoubtedly polarizing the November elections in Minneapolis. Socialists, the labor movement, and anti police-brutality activists will have the key task of building genuine working-class support for a community-led approach to public safety. This should include fighting for a democratically elected community oversight board with the power to hire, fire, subpoena, and that can rid the department of anyone with a history of racism, sexism, bigotry, or violence.

Conviction or not, voters can make racism and policing deciding factors in the city council campaigns. On the November ballot, there may be a referendum to amend the city charter to reform the police department. This would be an important step forward, but the language as-is leaves many questions unanswered. Without pressure, it can amount to a mere name-change from the Minneapolis Police Department to the Department of Public Safety. But organizing in a serious way, building community support, and making clear demands like defunding the police by 50% and taxing the rich to fund affordable housing and social programs, can open up possibilities to introduce widespread reforms. Leaving these issues in the hands of the City Council would be a major mistake.

While lawyers and judges debate the specifics of the case and legal technicalities, working people need to protest and organize a multi-racial mass movement against the real forces behind George Floyd’s murder: out-of-control policing, systemic racism, and poverty. Over the past year, the ruling class has proved it’s incapable of solving crisis after crisis, especially the pandemic and its social costs. Capitalism killed George Floyd, along with 500,000 Americans. We need to build a movement that fights injustice in all its forms.