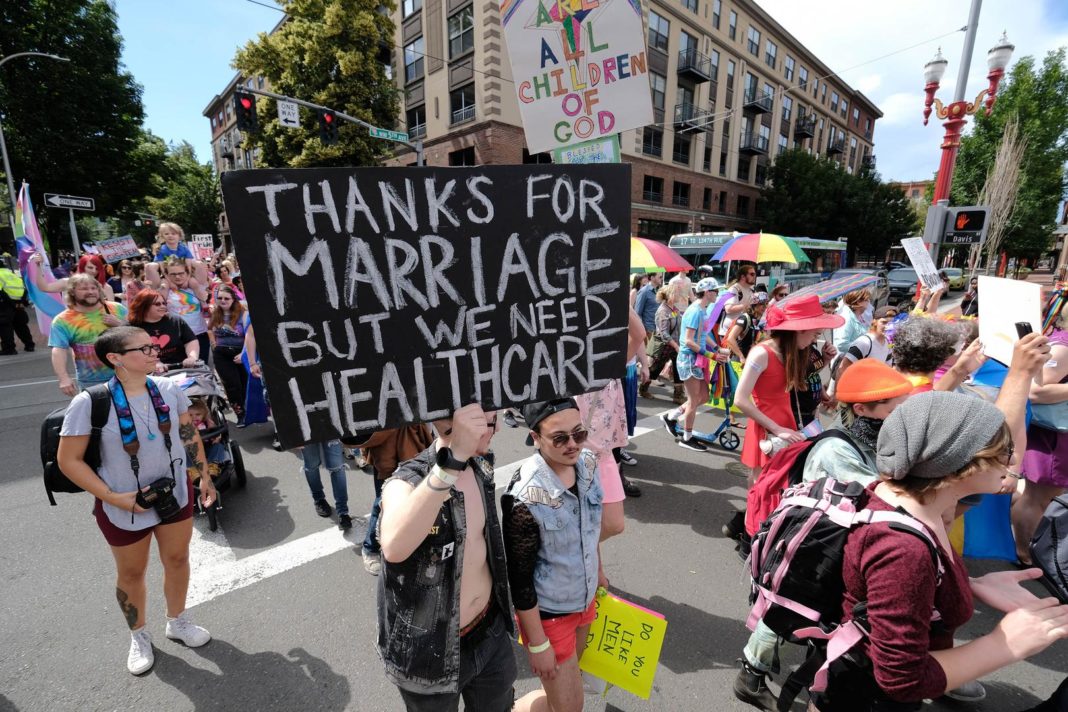 Imagine, for a moment, that you’re a transgender person working in retail. After coming out at work a few months ago, your manager has taken to criticizing everything you do. Though you’re careful to do your job as well as possible, your manager picks holes in your performance anyway. Your coworkers tell you that she makes derogatory comments about you behind your back. One day, after needlessly correcting you again, your manager tells you not to come back to work the next day.

“You can’t fire me,” you reply. “It’s illegal to fire me for being trans in this state.”

You know that she’s lying. Her endless criticisms only began after you came out. But she’s never said anything transphobic to your face, and this retailer fires people who “don’t work fast enough” all the time. You go home, unemployed and sure that you’ve been illegally discriminated against, but with no way to prove it or get your job back.

This hypothetical, for many LGBTQ+ people in the United States, echoes reality. According to the National Center for Trans Equality, more than one in four transgender people have lost a job due to discrimination, and more than three in four experience workplace harassment. A bill moving through Congress right now, called the Equality Act, takes aim at homophobia and transphobia in the workplace and other areas of life – but can it work?

The Equality Act, which passed the House of Representatives on February 25, would amend existing civil rights laws like the Civil Rights Act of 1964 and the Fair Housing Act to explicitly prohibit LGBTQ+ discrimination in workplaces, housing, education, credit, jury service, and other areas of life. Currently, 21 states do not prohibit discrimination on the basis of sexual orientation or gender identity in housing, and 23 have no LGBTQ+ legal protections in public accommodations.

At the same time the Equality Act is making its way through Congress, states are attempting to further codify anti-trans discrimination. Bills banning transgender athletes from joining teams that match their gender identity have advanced in North Dakota, Mississippi, Georgia, Kansas, Utah, and Tennessee. Even more horrifyingly, a bill has passed the Alabama Senate that would prohibit doctors from prescribing, or even discussing, gender-affirming treatment with transgender minors. The astonishing speed at which anti-LGBTQ+ legislation is progressing through state legislatures highlights how urgent action is needed.

The Equality Act, if passed by the Senate and signed by President Biden, would be a sweeping leap forward for the legal rights of LGBTQ+ people in the United States, on par with marriage equality in 2015 – but it’s crucial to examine why even this action won’t span the vast gap between LGBTQ+ people and fair treatment, and to look at what’s actually standing in the way.

In the United States, for most non-union workers, the law of the land is “at-will” employment, meaning that workers are subject to termination at any time and for any reason. You can be fired for wearing a uniform incorrectly, for coming in late, for calling in sick, or even simply because the management doesn’t like you. This abysmal state of workers’ rights, when combined with rampant homophobia and transphobia, has drastic consequences for LGBTQ+ people. LGBTQ+ people collectively have a poverty rate of 21.6%, much higher than the rate of straight, cisgender people (15.7%).

The objective of the Equality Act is to give LGBTQ+ people the rights and securities that cisgender, straight workers have – but when stacked up against the influence of corporations and the rich, that’s still not very much. Take, for example, the issue of wage theft. Millions of workers – across all genders and races – lose wages every year, through “paperwork mistakes,” misclassification, or even just open disregard of minimum wage laws. Enforcement of fair labor laws is so loose, however, that most workers never recover those wages. Wage theft is illegal in theory, but in practice, corporations get away with it every single day. A similar thing could be said for LGBTQ+ discrimination, if the Equality Act passes – illegal on paper, but in practice, very easy to get away with.

These aren’t just problems in the workplace. LGBTQ+ people commonly face discrimination in housing, leading to increased rates of homelessness. Research shows that 40% of homeless youth are LGBTQ+, and due to increased levels of poverty, they are also less able to afford homes. As a result, many LGBTQ+ people are renters. The Equality Act would prohibit discrimination in housing by amending the Fair Housing Act, but for LGBTQ+ people who rent, they will only be as well-protected as the other renters around them. If their locale doesn’t have strong renter’s rights laws that prevent landlord retaliation, LGBTQ+ people will still be at higher risk for eviction.

Ultimately, this is the major reason that corporations and the rich will stand against meaningful attempts to eliminate discrimination against LGBTQ+ people: because in order to do so, serious protections would have to be extended to all working people, which would come at a real cost to billionaires.

How Can We Win?

Achieving a world with truly free expression, free of gender-based and sexual discrimination, will require mounting a struggle to win liberation for all working people. Organized labor can play – and has played – a crucial role in fighting for workplace equality for oppressed people. For example, research has consistently shown that the racial wage gap between Black and white workers and the gender wage gap is smaller among union members when compared to non-union workers.

New efforts of workers to unionize their workplaces, such as the Amazon warehouse workers in Bessemer, Alabama, who are majority Black and women, are encouraging for the labor movement and show that the best tools to fight for workplace equality are class solidarity and collective action. Building a powerful labor movement of all races, genders, and sexualities that can challenge the interests of the bosses is the most effective way to fight against discrimination inside and outside the workplace.

The Equality Act, which is now going to face a difficult battle on the Senate floor, is an extremely positive step. Protection against discrimination on the basis of gender identity or sexual orientation should be enshrined in the law. But if we are to qualitatively improve the lives of LGBTQ+ people in America, our approach must go beyond attacking obvious discrimination. Ultimately, the reforms that would protect LGBTQ+ Americans against discrimination most effectively are desperately needed by all working people: universal single-payer healthcare, eviction moratoriums and a cancellation of rental debt accrued under the pandemic, rent control, strong unions, a $15 minimum wage, and affordable public housing, just to name a few. Winning any of them – and defending against attacks like the anti-trans bill in Alabama – will require bold movements uniting working people of all genders and sexualities, and using our collective power as working people.

Our victories as LGBTQ+ people have never been easily won, and changes in attitude have not been automatic. In order to fight against dangerous discrimination and attacks on our humanity, LGBTQ+ people should and must join with those who share our interests – working and oppressed people of every gender, sexuality, race, and age to demand not just the minimum protections to stop us from being fired and evicted, but the complete end of the discriminatory capitalist system.