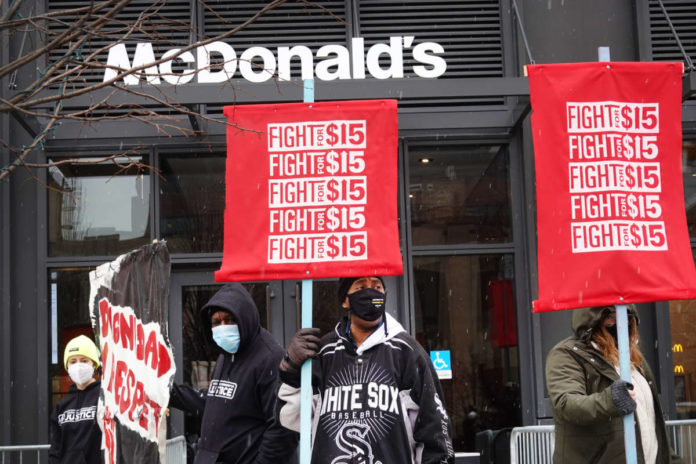 From the onset of the COVID crisis, the livelihood and health of those of us working in food service and hospitality have been at constant odds with business interests. The hospitality industry has faced serious economic threats this past year to what is already highly precarious work. 110,000 restaurants have boarded up their windows nationwide since last March and revenue across the industry is down 60% since last February. The economic strain on businesses means decreased opportunities for employment, and increased demand on those who still have their job. Service sector workers faced higher unemployment than any other industry, closing out 2020 at 16.7%.

This all combines with historically low pay to put workers on dangerous footing for an economic downturn. For those who rely on tips, the federal minimum wage is only $2.13 an hour. Technically, employers are expected to make up any difference between the typical minimum wage (still only $7.25) and pay after tips, but the precarity of work and lack of unionization provides space for many employers to sidestep this rule. For women who have always been put in a position to endure sexual harassment in the name of tips and job security, this has only heightened their predicament. In fact, more than 40% of restaurant workers say they have seen an increase in harassment since the onset of COVID.

We also entered into 2020 as a group particularly vulnerable to the health effects of the crisis. One in four food service workers were uninsured prior to the start of the pandemic. A study conducted by the University of California San Francisco found that working age adults across all sectors faced a 22% mortality increase during the pandemic, but line cooks faced a 60% increase in mortality rates! Immigrant workers make up a huge section of back-of-house workers in the industry, facing grueling, crammed conditions with no possibility of social distancing, and such low wages that time off for feeling sick has never been an option – meaning that they have literally been dying to fill orders as a result.

The conflict between this human cost and the needs of capitalism were fully apparent with the reopening of indoor dining in New York City. An early COVID epicenter, New York soon demonstrated impressive containment while balancing local business interests through creative solutions such as the Open Streets, a restaurant-led initiative which closed off streets to vehicle traffic in order to expand outdoor dining. As summer came to a close, the city and state governments were met with lawsuits by local businesses to reopen indoor dining options. Indoor dining reopened at 25% capacity on September 30 despite 80% of Americans, according to a McKinsey survey, saying they experienced anxiety about dining indoors. Data provides merit to these feelings – according to a CDC study released in September, adults with positive COVID-19 results were twice as likely to have eaten at a restaurant in the two weeks prior. A surge in positive cases after the September reopening closed indoor dining again in New York by December.

We were deemed essential from the earliest days of the pandemic, but our “essentiality” was not weighed accordingly when the New York state vaccine rollout began. Food service workers were initially placed last in line to receive the vaccine. This lack of access to vaccination did not prevent the state’s second reopening of indoor dining in February. When asked about whether he would begin prioritizing restaurant workers ahead of this reopening, Governor Andrew Cuomo initially referred to the question as being “cheap and insincere,” a boldly cynical response to genuine concern about our well-being. However, we were expedited to having immediate access soon after.

But ability to schedule an appointment did not mean that the workers expected to staff indoor dining would actually receive the vaccine before being put into danger.  Cuomo announced the eligibility change 10 days ahead of the reopening, at a time when it was near-impossible to find available appointments. Those seeking access were soon greeted by a lack of open time slots and government websites crashing under large demand. Already-strained supply has hampered full immunization for many who are due for their second dose.

Business interests and the drive for profit should never be put ahead of our lives. The threats faced by those of us in the service sector during this crisis stand as a serious indictment of the capitalist system. It has proven completely unable to provide us living wages, access to health care, sufficient vaccination rollouts, housing security, and a myriad of other human needs. At the same time, America’s billionaires have gained over a trillion dollars in additional wealth since last March. This disparity moved fast food workers across 15 cities into action in February for a one-day strike demanding a $15 minimum wage. Speaking in a video shared on Twitter by the North Carolina Fight for 15, Cracker Barrel employee Eric Winston said, “we’re on strike to remind our employers that we are the company. Us – the workers – we are the engines that run your business.”

Organization and struggle in the service sector will need to be scaled up massively. We need to abolish tiered wages for tipped workers and demand a better standard of living for all. Winning a $15 an hour minimum wage would provide a huge boost to the livelihood and confidence of those of us in the service sector, but corporate Democrats have already dropped that demand from the $1.9 trillion stimulus bill. President Biden has already privately told governors to expect Congressional action on a $15 minimum wage to be put off, indefinitely. We need to fight to ensure it’s on the agenda. That means unions taking up bold and immediate campaigns to organize service workers with $15 as a rallying demand.