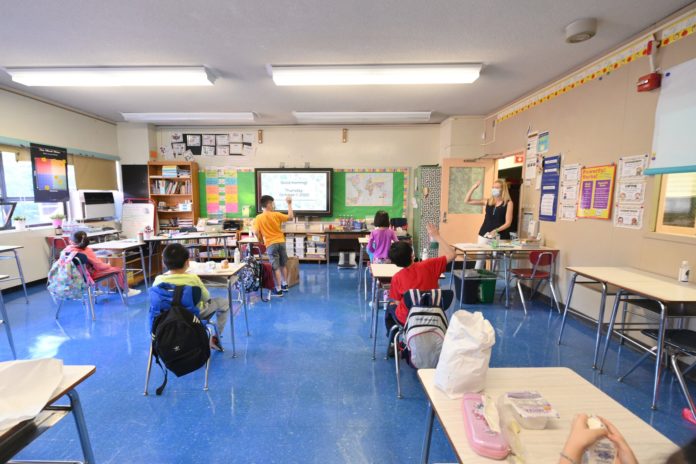 Last April, as millions lost their jobs and death tolls climbed, Trump promised things would be back to normal by June. Then he got COVID as an entirely preventable “second wave” swept the country, and schools shuttered again. Millions breathed a sigh of relief when Biden beat Trump, but the winter was catastrophic with COVID raging uncontrolled and hundreds of thousands losing their lives. The numbers have come way down since January but the possibility of a safe school reopening still seems distant.

As politicians on both sides of the aisle prioritized corporate profits over a real pandemic response, almost half of all students remained in school despite the enormous risks. For millions more, remote learning became an extremely challenging fact of life. Besides glaring issues like millions of students lacking consistent access to the internet, remote learning prioritized “measurable” subjects like reading and math at the expense of other important goals like socialization for elementary students, and support for students with disabilities. It’s had a profound impact on teenagers learning and mental health too – teen suicide attempts have almost doubled since 2019.

While Biden entered the White House promising all K-12 schools would be open within the first 100 days of his presidency, he has been forced to back off by the severity of COVID and opposition from local teachers’ unions and many parents. His administration has now said they hope to get the majority of elementary and middle schools back in buildings, at least one day a week, but many hurdles need to be overcome to get students and teachers back in the classroom safely.

The political establishment points to the fact New York City schools have stayed below the 3% positivity threshold, and below the citywide average, as evidence that all schools can be safely reopened. But, New York City’s schools are a long way away from a return to normal in-person learning.

In the first six weeks of this year, half of New York City’s public elementary schools were closed for up to two weeks because infections went past the guidelines. Middle schools and high schools have been closed since November. These major disruptions happened when schools were operating far below their full capacity. The district will face an additional test this week, when 62,000 middle schoolers return. Unsurprisingly, the New York City plan has not won the confidence of parents, 70% of whom have opted their children out of in-person learning, especially Black and Latino families. The bottom line is a “reopening” where the overwhelming bulk of students, especially the students who need the resources the most, aren’t attending or attending just two days a week is not really a “reopening” and certainly not a “model.”

Chicago Mayor Lori Lightfoot arbitrarily rejected Chicago Teachers Union and parents’ call for similar reopening guidelines to what has been used in NYC. In Chicago the potential solidarity between parents and teachers that could be built around a safe reopening was on display. Rank-and-file teachers organized wildcat actions by continuing to teach remotely outside of their buildings. Parents managed to get 98 individual Local School Councils to oppose Lightfoot’s plan. A local Fox News poll showed 77% of the public supported CTU. This momentum was squandered by the leadership of the CTU which emphasized the possibility of defeat and urged the membership to fight for demands that were “realistic” to the political establishment.

It would be a mistake to conclude that the fight for a safe reopening is somehow over. The Democratic Party establishment in Philadelphia has delayed reopening until March under pressure from a growing coalition of community organizations. The United Teachers Los Angeles is fighting for a bold set of demands, including “isolation/quarantine procedures” in hotels, which is especially important because COVID has spread fastest in working class neighborhoods where people often live in overcrowded housing. The UTLA has also taken up demands to end arbitrary standardized testing, correctly pointing out that the already mind numbing, unscientific testing makes virtual learning even more unbearable.

Educators, parents and students fighting for a safe reopening find themselves taking on Democratic Party politicians. At a candle-light vigil to mark a half a million U.S. deaths, Biden talked about “healing together” without offering much substantial progress on his bold campaign promises. Biden, and corporate Democrats across the country, are under pressure to reopen the economy, i.e. restore corporate profits.

The Democrats, having gotten teachers’ votes to defeat Trump, have now turned on them, blaming the unions for the failure of capitalism. It’s especially frustrating to see union leaders like Randi Weingarten, president of the American Federation of Teachers,  featured in the New York Times tamping down rebellious union locals, who have a very healthy skepticism of promises from school administrators, while at the same time even Dr. Fauci is saying schools cannot safely be reopened without a massive influx of resources.

A Socialist Plan to Reopen Schools

We need to keep in mind that while half a million Americans have died, the world’s ten richest men have increased their wealth during the pandemic by enough to buy vaccines for everyone on earth. The political establishment’s failure to address the pandemic is the biggest barrier to a safe reopening – not “stubborn educators,” “teacher unions” or “skeptical parents.”

A real plan for school reopenings would include urgent vaccinations of all educators. An uncoordinated, poorly managed vaccine effort today increases the likelihood new variants that are resistant to today’s vaccines take hold. In addition, we need to dramatically expand contact tracing and guarantee widespread, regular testing of students and staff to ensure outbreaks are isolated quickly. We need mass hiring of new educators and support staff, to reduce class sizes, keep students safe, and provide for the emotional, social, and academic needs of students. We should eliminate arbitrary high stakes testing that reinforces class and racial inequities in education and move away from grading systems that mainly measure how students are coping with an impossible situation. Committees of students, parents and educators should democratically manage the reopening (or further shutdowns) – not out of touch school administrators and politicians with ties to big business.

Even the best reopening plans are undermined by systemic failures in the pandemic response. To bring infection rates down in a more decisive way, we need renewed national lockdowns, with mandatory paid leave and rent and mortgage forgiveness. Logistics corporations like Amazon should be unionized and put under emergency public ownership to coordinate delivery of food, vital materials, and medicine. COVID tests should be sent to everyone in the mail, and people with positive results should be offered free quarantine in vacant hotel rooms. From here, we need to tax billionaires and corporations to hire millions of contact tracers, and nationalize big pharma to scale up vaccine production. Such measures would provide a safe environment where schools could be safely reopened under democratic management of educators, parents and students.