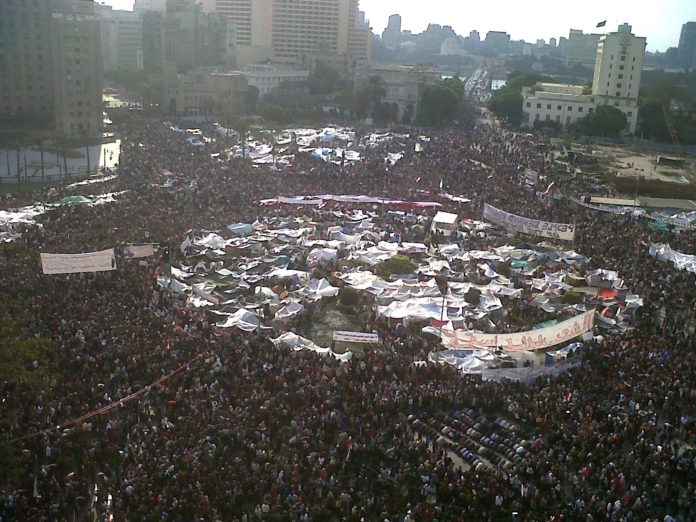 Like dominoes, the regimes fell in a huge revolutionary wave in 2011: Ben Ali in Tunisia, Mubarak in Egypt, Gaddafi in Libya, Saleh in Yemen. The occupations of squares in Egypt inspired the Occupy movement in the USA and the Indignados in Spain. After capitalism demonstrated its continued vulnerability to crisis in 2009, the movements in North Africa and the Middle East proved that “revolution” is more than just a word in the history book.

My backpacking vacation through Tunisia in December 2010 turned into an adventurous journey into a pre-revolutionary situation. Upon my arrival, pictures of President Ben Ali, who had been in power since 1987, lined the streets and cafés. The regime gave itself a modern and secular image. But already on the island of Djerba, a typical tourist center, the economic problems were unmistakable, the desperation of those who lived from the absence of tourists from Europe was tangible: the hotel castles empty, the merchants and tricksters obtrusive, the general discontent large. After a few days I drove to the poor south of the country. My poor but generous host in a small Berber village with picturesque storage ruins was suddenly called by the police after two days: he had no (expensive) license to accommodate tourists, and had to send me away. The repressive state had its informers everywhere. Discussions about politics were quickly broken off — too dangerous. But even without discussion it was clear: everywhere in the country there was too much poverty and too little freedom. The only future perspective for the youth was to somehow get to Europe. With European border policy, this was impossible.

I came to Gafsa, a city that lives from phosphate mining. I got to know Raouf, a teacher and trade unionist. Tunisia had one of the strongest workers’ movements in the Arab world. The large trade union UGTT was close to the state at the top, but a powerful representation of workers at the bottom. Already in 2008, a strike broke out in Gafsa against the lack of prospects, social injustice, but also against the destruction of the environment.

I discussed for hours with Raouf. I said that with so many police, so little freedom and so much poverty, the conditions cried out for revolution. He laughed. “There will never be a revolution in Tunisia! “People are much too well-behaved here…” But he also told the harrowing story of the vegetable vendor Mohamed Bouazizi, who set himself on fire a week before after being repeatedly harassed by the police. The next day, December 25, 2010, he received the news that the police fired on a demonstration in Menzel Bouzaiane, the village was sealed off. My plane back to Germany left the next day, I had to leave the revolution behind, but I stayed in contact with Raouf.

Role of the Working Class

The Tunisian spark ignited a revolutionary conflagration in which the workers played a special role. Under pressure from below, the UGTT was forced to push the revolution forward and call for a general strike. Even the offered protection of the former colonial ruler France did not help anymore: on January 14, the dictator fled the country, not without taking with him his enormous gold reserves, which bore witness to nepotism and Mafia-like corruption.

The focus shifted to Egypt, where on May 1, 2010, the workers’ movement demanded a higher minimum wage, a demand that was popularized by the 22,000 textile workers at Mahalla textile factories. However, the dictatorship and the organizing monopoly of the state union still set narrow limits to the movement at the time. But the success of the revolution in Tunisia was now opening the floodgates there too: the masses were occupying Tahrir Square in Cairo, and in between the street battles with the police they were constantly discussing the revolution, organizing, and lessons of history. A new trade union confederation was founded, which called for a general strike a few days later. The country came to an absolute standstill. Mubarak no longer had any power in the state, and had to resign.

The battle cry “Ash-shaʻb yurīd isqāt an-nizām” (The people demand the overthrow of the regime) echoed through the streets and squares of every country in the region — and got louder with every overthrown dictator. The masses inspired each other — yet, as in any revolution, the ruling class was trying everything to stay in power. Revolution and counterrevolution began their unequal struggle.

The reaction was raising its head in the form of right-wing Islamism: in Tunisia, in the form of the Ennahda Party, which won the first free elections; in Egypt, in the form of the Muslim Brotherhood, which was swept to power as a powerful but previously banned opposition force of the religious (petty) bourgeoisie. Libya was sinking into bloody civil war, which, initially with the help of Western imperialism, led to the end of Gaddafi, but which afterwards continued to this day. The development in Syria was particularly tragic. Mass protests by hundreds of thousands against Assad were being bloodily suppressed until parts of the military refused to follow the regime and formed the so-called “Free Syrian Army”. The ensuing military stalemate led to civil war with massive interference by major and regional powers, which, along with the divide-and-rule policies of the regime, fueled sectarian tensions. To date, the war has cost over 500,000 people their lives and led to the rise of reactionary forces such as ISIS. The Kurdish leftist flagship project Rojava has fallen victim to the imperialist interests of Turkey and Russia. A historical flight movement and ghost towns in ruins are a reminder of a failed revolution.

Weakness of the Left

One reason for the silting up of the revolutions was the weakness of the left, caused by decades of persecution, but also by the former dominance of the Stalinist parties. Their stage theory, according to which neo-colonial countries must first become fully developed bourgeois nation states before the working class can dare to undertake socialist tasks, enriched with the local color of pan-Arabism, has led the left into a dead end. The heavy legacy continues to work today. After the revolution in Tunisia, political parties sprang up like mushrooms; there are over 240 today. The left alliance of 12 of them, the “Popular Front,” was quite capable of mobilization. When their leader Chokri Belaid was shot dead by Islamists, 1.4 million people came to the funeral. Today it is “clinically dead”: there are no more activities, no meetings, no discussions, no new members. In the last elections in 2019 it just managed to get 1% of the votes.

After 10 years, what is left of the great hopes of the revolution? I ask Raouf, of whose earlier naivety nothing has remained: “The system of exploitation has remained the same. Capitalism is the same. Neocolonialism is the same. Poverty has remained — in fact, it has even gotten worse. Some now say that things were better in the past because prices were lower, wages were higher, there was less privatization in public transport, education and health care”. Has it still been worthwhile? “It was a golden opportunity to fight for change. It was like a dream when people from all backgrounds came together with one voice. But the absence of a political party that could have crowned this dream meant that people woke up and realized that only chaos remained”.

So one thing above all remains: a lesson. A revolution without a revolutionary party and a program that can unite the masses, whilst demonstrating the huge potential for transforming society, won’t be able to achieve its end goals. The ISA and the organization it now has in Tunisia, Tayaar al’Amael al’Qaaedi, is dedicated to help build such a party with all those who have been drawing a similar conclusion through their experience in the revolutionary struggles of the last decade.