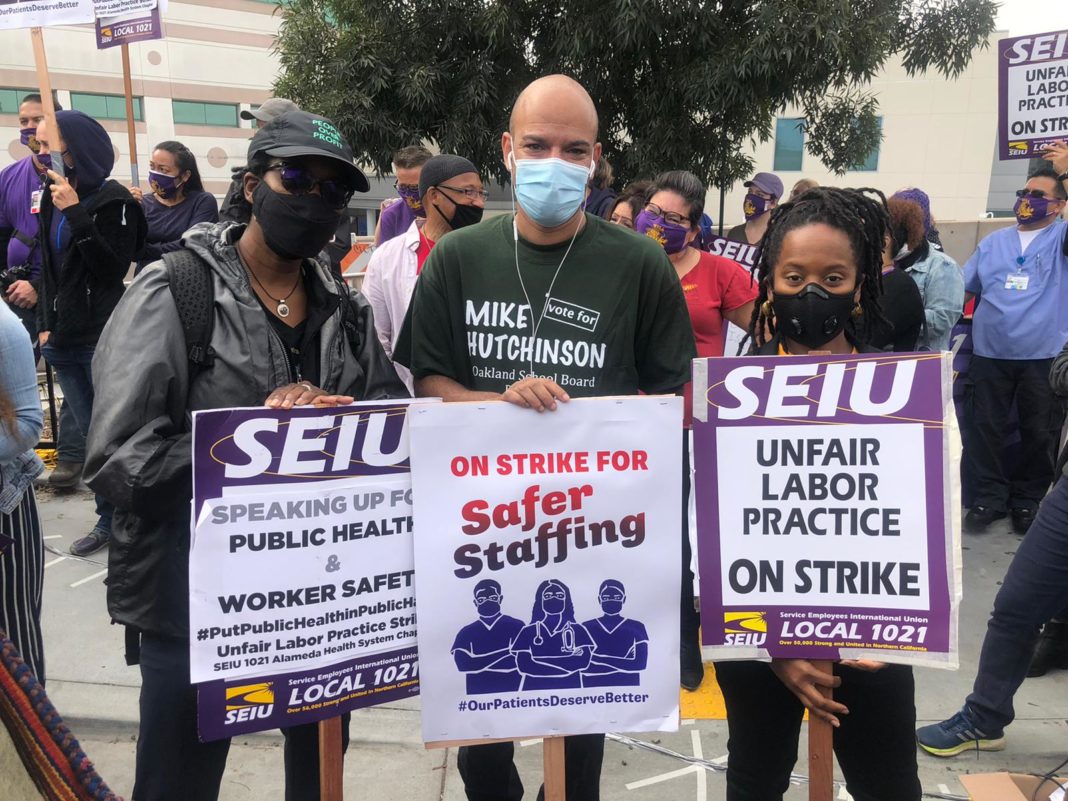 Fearing the rise of socialist and progressive politics embodied by Bernie and AOC, the big developers, tech companies, billionaire privatizers, and Republican donors spent record numbers on local elections in the Bay Area, spending around $2 million in Oakland and over $5 million in San Francisco. But despite these attempts, democratic socialists, union educators, and other progressives defeated corporate candidates and incumbents for seats on the Oakland school board, Oakland City Council, San Francisco Board of Supervisors and more. Many of these candidates came directly out of the 2019 Okaland Teachers’ strike, rent and housing campaigns, and off of the strength of these movements are bringing the issues to elected office.

For the last decade, billionaires have seen Oakland as a perfect city to test their privatization agenda. Michael Bloomberg, Bill Gates, and the Waltons have spent huge money to back pro-charter school board candidates in the city in order to cut funding, close public schools and funnel money into their profitable charter schools. The school board for years has been completely filled with these billionaire-backed candidates. Around 20 years ago charter schools served 3% of students in Oakland, now it’s 30%. This was made possible by the school board who have participated in a systematic plan to privatize Oakland schools.

In 2019, Oakland teachers organized with the Oakland Education Association (OEA) fought back, going on a seven day strike to win higher wages, smaller class sizes, and to fight charter schools. During the strike, the union marched with thousands of supporters to the Charter School campaign headquarters. After the strike ended, hundreds demonstrated outside a pro-Charter convention in Oakland, including members of Socialist Alternative.

While the teachers won some concessions out of the strike, they knew that it wasn’t enough. Socialist Alternative had called on the union to run its own popular leaders for the school board to maximize the support the OEA had gathered. While they didn’t run their own candidates,, the union ended up endorsing four candidates who ran on pro-public school, pro-union, and anti-charter school platforms, including Democratic Socialist of America (DSA) endorsed anti-charter school activist Mike Hutchinson. Hutchinson has been fighting school closures and privatization since at least 2011 when the school board closed 5 elementary schools.

OEA and the billionaires both knew how important this battle was: if OEA could win all four seats, union backed candidates would be a majority on the seven person Oakland school board. None of the billionaire-backed incumbents ran for re-election due to their unpopular role in the teachers strike, but pro-charter candidates emerged in all four races. Over $600,000 was raised by charter school PACs, of which $500,000 came from Michael Bloomberg alone to push their cloaked privatization agenda.

Of the four OEA backed candidates, three were former Oakland teachers, and one a current San Francisco union teacher. Three out of the four candidates won their seats, a huge victory for the nationwide teachers movement. Having three allies on the school board will substantially change the education struggle in Oakland, but teachers, parents, and students will have to continue to fight to ensure that all the newlyelected board members refuse to allow any cuts to Oakland schools in the context of COVID budget shortfalls.

One of the most pressing issues for workers across the Bay Area has been housing. The median rent in San Francisco increased by 52.35%, compared to a 3.4% increase across California, and wages have not risen to match this increase. As developers build enormous wealth from rising rents and home prices, homelessness has also kept rising. In response, there has been a growing movement for affordable housing and rent control. Building off this rising mood, two socialist-backed housing activists won victories in Oakland and San Francisco.

In Oakland, long time activist Carroll Fife, most known for her role in the “Moms for Housing” struggle, and also chair of the pandemic-era Oakland Rent Strike, ran for Oakland City Council and defeated the corporate-backed incumbent. In San Francisco, democractic socialist Dean Preston, building from his 2019 victory, won re-election to the Board of Supervisors against a candidate supported by developers, tech companies, and Republican donors. Both candidates were endorsed by DSA and Bernie Sanders, and were openly anti-capitalist.

Fife ran on a campaign of housing as a human right, defunding the police, supporting essential workers, and taxing the rich. From the beginning the Democratic Party establishment saw her as a threat, and the Mayor’s pro-big developer Democrats mobilized to support her opponent. The Chamber of Commerce spent over $100,000 to support the incumbent.

OEA and DSA endorsed Carrol Fife and mobilized their members to campaign for her pro-housing, tax the rich program. East Bay DSA saw her campaign as one of their priority candidates for the election, and held frequent phonebanks and canvasses in support. Fife won 49% of the vote, with the incumbent’s share reduced to 30%! This was a blow to Mayor Schaaf’s pro-developer, so called “Equity” caucus, which introduced a pitiful $14 million cut to the Oakland police budget despite calls for a 50% cut, on the Oakland city council. Fife has said she aims to turn her campaign “into a permanent political organization dedicated to passing transformative legislation and building a progressive majority on the Oakland City Council.” Such an organization would be a huge step forward in Oakland. Winning a progressive majority and progressive legislation will require an independent, working class movement that will challenge the Democratic establishment’s stronghold on the city council.

Dean Preston, a tenant rights attorney and DSA member in San Francisco was first elected to the Board of Supervisors in a special election in 2019, running on a campaign for affordable housing. Preston spent his first year in office fighting for housing rights, including a ban on evictions for tenants who couldn’t pay rent during the pandemic, and fighting alongside the BLM movement. Developers, tech companies, and Republicans have been watching the growing socialist movement. They have seen the rise in popularity of Alexandria Ocasio-Cortez and the squad, the defeat of Amazon by Kshama Sawant and the Tax Amazon movement in Seattle, and the Sanders campaign earlier this year. Afraid of this growing movement, they spent over $5 million in an attempt to defeat democratic socialist Preston, together with the ballot measures he backed and other left candidates in San Francisco. This money was spent on vicious anti-homeless attacks, with one mailer attacking Preston for handing out “over 1,000 tents creating an out of control tent village” and creating “Dean Preston’s Fight Club” over photos of people in the streets fighting.

In response, Preston and the DSA built a pro-affordable housing, anti-eviction campaign, building off the successful Prop C in 2018, which taxed big business in order to fund affordable housing and homeless services. The money and disgusting attacks by the right-wing PACs saw blowback from working class voters, who saw them for the corporate-backed lies they were. Like Fife, Preston successfully defeated his establishment-backed opponent. The right-wing will not stop at this election though, and they have many elected officials in both Oakland and San Francisco who support their agenda. Both Fife and Preston will have to work with socialists and unions to build larger movements in order to win further victories for the working class.

Richmond has been a one corporation city for decades, and in response to Chevron’s domination, the Richmond Progressive Alliance (RPA) was born. They have run candidates and won elections over the past decade, and this November saw every one of their candidates win. On the city council all three of their candidates defeated corporate backed opponents, joining their one city council member. This gives them a majority on the Richmond City Council.

After being asked by the bus drivers union (ATU Local 192), Jovanka Beckles ran for the AC Transit Board, the local council that runs the transit system in much of the East Bay. An RPA member and former Richmond City Council member, Beckles had previously run for State Assembly in 2018, building a strong campaign backed by RPA and East Bay DSA. While she lost that campaign, she built on that base to win her campaign for AC Transit Board, running on a platform of taxing the rich to fund free public transit, and a Green New Deal for public transportation. She ran as an open socialist and DSA member. East Bay DSA once again mobilized for her campaign, making it one of their priorities for the election, running frequent phonebanks and dropping campaign literature in apartments and homes across the city. The 14-year incumbent was smashed into third place with 17% of the vote.

The Basis for a Corporate-Free Political Party

The anger at the corporations and, in particular, the big developers goes deep in the Bay Area. Big Tech’s occupation of Silicon Valley has led to a mass influx of people to the Bay Area and big developers have capitalized on it, jacking up rents, and pushing working people further and further out.

The situation has become even more dire in the context of the pandemic. As big companies continue to make huge profits, working people face even worse conditions and mounting COVID cases. All while the Democratic Party controlled state government pushes austerity and the Governor goes to expensive restaurants with lobbyists. The enemy is increasingly the landlord, the big developers, the callous employers, and their purchased politicians. In this framework the East Bay Realtors Association, the landlords’ organization, decided not to endorse any Oakland candidates, as, in reality, this would have been the kiss of death for candidates. Instead their money went into the anonymous world of PACs.

The election victories for the working class movement across the Bay Area represents an important step forward. They were built around working class demands like taxing the rich, affordable housing, defunding the police, and a Green New Deal. Many of these campaigns were run with little or no mention of the Democratic Party, despite most candidates running as Democrats.

Now that these union activists, progressives, and socialists have won election, the Democratic Party establishment will try to bring them into their pro-corporate world with arguments of the need for small changes first. They will put all the pressure on these candidates to tow the failed line that has seen inequality rocket in our cities. We will need a vibrant, independent, socialist working class movement in order to win the progressive platforms these candidates ran on. Billionaires and developers do not see the election as the only battle, and neither can we. Labor and socialists have won a victory in the Bay Area this November, and now would be the time to start talking about the birth of a Bay Area political party to unite Bernie supporters, union members, housing, racial justice, and climate activists. Working class activists have seen too many leaders talk the talk during the election and walk the walk with the establishment once in office. The urgent need for change can’t allow for this to happen this time around.