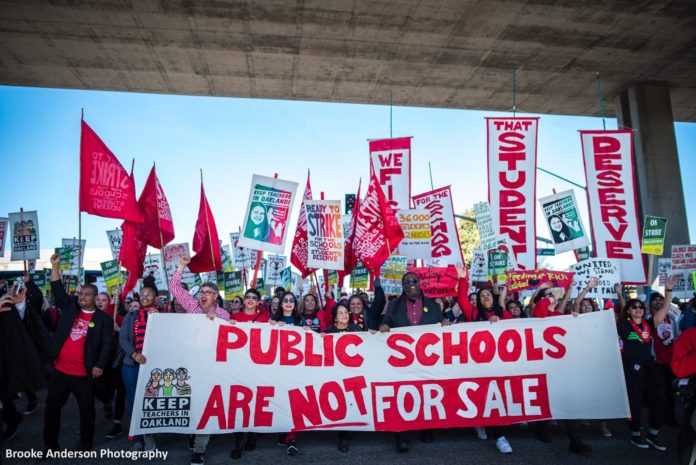 This Thursday, February 21st, Oakland teachers are going on strike, demanding higher wages, lower class sizes, more student support personnel, and an end to school closures. This strike is a critical moment for all working people in Oakland, for all our unions and for the next generation. A victory for the Oakland Education Association (OEA) will be a huge setback not only for the school board’s plans for school privatization, but also for the whole Oakland establishment, including the gentrification plans of the developers and the city council.

Capitalism is now beginning to hit a series of road bumps, after decades of defeats for the labor movement and many years of big business euphoria following the collapse of the Stalinist states in Eastern Europe. Market globalization is fraying at the seams, and anger against the neoliberal agenda is boiling over and transforming into a resistance. Private healthcare is under siege from the popularity of Medicare for All, and school charterization has, for the first time, begun to face substantial opposition.

The shifts in consciousness, expressed through Occupy and the 2016 Bernie Sanders campaign and the disappointment and anger as millions of workers continue to have their living standards driven back despite the economic recovery, has begun to find an outlet in strike actions. Last year more people went on strike nationally than in any year since 1986. The generation of young people who grew up in a desert of no strikes are now finding their way forward.

Oakland has become a laboratory for the billionaires’ vision of privatization. In 2007, a group of businessmen and top pro-Charter Democrats met to discuss a 10 year plan for full take over of the district, a plan that would be well-funded and well-organized. That meeting was also attended by the current Oakland mayor. Today, all seven school board members’ electoral campaigns were funded by this group and their myriad of spin-off pro-Charter non-profits. Several of our recent school superintendents attended the Eli Broad Center, where they train administrators to advance this same agenda.

The billionaire-backed plan for corporate education “reform” uses charter schools as a tool to bring private management, a non-union workforce and profit extraction to public education. In Oakland, the formula has been to chronically under-fund schools, and then use high stakes testing to identify so-called “low-performing” schools. These schools are targeted for closure and the campuses are given over to charter schools, which pull students out of the district as well as the funding that the district receives for each student’s attendance. Charter schools are not required to provide the comprehensive services that public school districts have in place to serve students with special needs, and the public school system is left with less money to educate the neediest students.

While charter schools are supposed to be not-for-profit by law in the state of California, in fact there are a variety of mechanisms for charter school companies to make money educating our kids. Nationwide, there have been countless scandals involving charter school operators defrauding states in a variety of scams. Oakland charters are part of this trend, as two different charter schools have recently been investigated for issues including financial conflicts of interest, requiring students to buy items from specific vendors, and a nearly half million dollar severance package.

Many of our principals are no longer paid through direct OUSD money, but instead through billionaire non-profit grants. 30% of OUSD kids are now in privately-run charters. These forces have successfully taken over the administration of the district and now want to dismantle direct run schools and weaken and demoralize the teachers and parents in the district.

In 2012 there were early signs of a broad fight back when the Occupy movement succeeded in halting Oakland school closures for a number of years. But the ruling class in Oakland did not foresee the huge outpouring of support for the teachers and the national teacher strike wave. This undermines their long term attempts to smash the OEA and their hopes for a swift acceleration of school closures and charterizations. Nonetheless, they are attempting to forge ahead with closing Roots International Academy as a first step to re-organizing or closing 27 schools, and they’re refusing the teachers’ very modest demands for a 12% salary hike over three years.

In the summer, a new left-wing leadership won the elections in the 3,000-member OEA, pledging to turn around the crisis of teacher retention in a district where our teachers are paid up to $15,000 less than neighboring districts. Like the Los Angeles teachers union, UTLA, the OEA leaders are also committed to increasing the numbers of support staff and reducing class sizes. Additionally, in a bold move, they have promised the parent community that they will add in to their negotiations the demand to keep Roots open and not allow schools to be closed.

The new leadership has built a solid plan to fight the district. At the same time, local schools have also been given the room to self-organize. On December 10th, Oakland High had a wildcat sick-out strike and a march from their school attended by a hundred teachers, students and supporters. 75 out of 90 teachers participated.

The District loses money for each student that is absent. So far the District’s intransigence has possibly cost them over a million dollars. They are arguing there is a fiscal crisis, but they had a $30 million surplus last year and it appears they are cooking the books to make it look like there is no money in the District. They spend more on consultants and administration than any other district of its size in California. The District headquarters has essentially been shaped into a vehicle for charterization. Its Office of Innovation is really the office of school destabilization and destruction. Its Office of Enrollment is essentially the office of charter expansion.

What we are seeing is a rapidly rising consciousness among teachers, parents and students. All of the widespread and deeply felt anger at this society is now funneled into anger at the District. One teacher said they opposed the Oakland High wildcat in December, but has now become one of the militant teachers leading the strike at their high school. Other teachers have said similar things. When the lid is lifted off the suppressed anger at the District, and allowed to air and mix with the other teachers’ anger, it grows exponentially. At a recent organizing meeting planning for the strike, there was not a single teacher who questioned the proposal for mass physical blockading of the schools during the strike.

There is a perfect storm brewing for a huge clash. Teachers are enormously popular in Oakland and the district is increasingly exposed for what their plans actually represent. The OEA leadership have argued for solid, mass pickets to prevent every single person or vehicle entering every school. Special education busses will be turned around and the district will have to figure out what to do with those students. The high school teachers seem to be more militant than elementary and middle school teachers, but at the same time the parents are less active in the high schools. So in each case the angry teachers can influence the parents and the angry parents influence and strengthen the teachers.

Any strike can win if it has two things: if it stops production and if it widens the strike. In the case of public sector strikes, a strike victory is much more likely if the union wins the support of the wider working class. In January’s LA teacher strike this was the case. At the five rallies during the strike each numbering between 30-60,000 the teachers were outnumbered by parents, or, to be more accurate, by the wider working class. The LA teachers strike was an uprising of sorts – an expression of anger about education, about austerity, about the failure of the American Dream all rolled into one. It terrified the LA ruling class, who said to the Mayor: this is getting out of hand, sort this out! This is what Socialist Alternative has been arguing about what needs to happen in Oakland: a movement so big and wide that the whole establishment demands that the School Board resolve the situation.

LAUSD is 10 times bigger than OUSD and less charterized. Teachers in Oakland may be just as angry as LA teachers, but our foe is better organized and more embedded. Three times more Oakland teachers voted in the strike authorization vote than in the previous strike authorization vote: some 85% of teachers. The 95% vote in favor of a strike is the highest in the history of the union. New teachers represent a large minority in the union as the annual turnover of teachers has reached up to 20% annually. Many of these newer teachers come from charter schools. In our view, an appeal needs to be made to the charter teachers to join us, to unionize with OEA. It’s an excellent development that many charter teachers are planning to sick-out on the second day of the strike.

The Oakland City Council unanimously passed a resolution with language in favor of some of the teachers’ demands. However, even the district’s official statements in the media now also say that they support many of the teachers’ demands – though of course saying it’s “impossible” because they’re “broke”! We want to know: how will the City Councilmembers support the teachers in action? Will they wage a public battle against the district’s misleading arguments? Will they work to keep teachers in Oakland by building good quality city-owned housing that teachers can actually afford? Will they go up against the rich corporations in Oakland and tax them to fund education?

By fighting for higher pay and teacher retention, and by fighting to stop school closures, teachers are in reality challenging the Oakland establishment’s broad plans to redevelop Oakland into a city where the working class and poor are not welcome. The Democratic Party’s control of the Mayor’s office, the school board and the city council is a major challenge for us winning this battle. We need socialists elected to the board and to the city council. This would give us a huge advantage that we do not currently have.

This is a serious fight, and all the unions, all genuine community organizations, all parents and students must rally together to win it. We have a moment now to change the direction of Oakland and take a step towards changing the direction of the country.