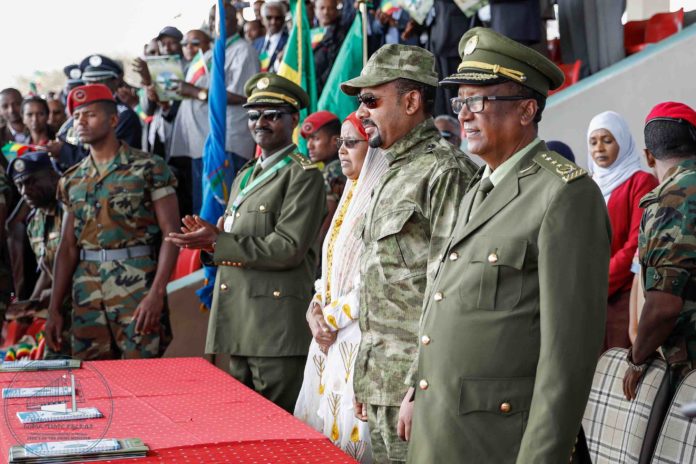 How did Ethiopia, described in capitalist media as an economic success story ruled by Nobel prize winner Abiy Ahmed, end up in war?

The war that started last week in the region of Tigray, Ethiopia, between the national army and Tigray armed forces, is putting millions at risk of famine and displacement. Within a few days, dozens of soldiers have been killed and hundreds are wounded, although the total shutdown of the region means that information is scarce and unreliable.

How did Ethiopia, described in capitalist media as an economic success story ruled by Nobel prize winner Abiy Ahmed, end up in war?

This civil war in Ethiopia is a power struggle between the country’s former rulers, based on a Tigray elite, and the new regime established since 2018 under Abiy Ahmed as Prime Minister. None of them represents the interests of the people in Ethiopia and Tigray, the most northern region of the country. The war is a sign of deep crisis, both in Ethiopia and for the global capitalist system. The country with the strongest economic growth globally over the last two decades, with a government backed by both the US and China, has entered a civil war.

The sharp conflict has escalated since the summer, with Abiy Ahmed cancelling promised elections and the Tigray People’s Liberation Front (TPLF) replying by organizing their own elections in September.

Last week, it came to armed conflict. On Wednesday November 4, Abiy Ahmed announced the army would retaliate following an attack on a military base in Tigray that killed soldiers and attempted to steal military equipment. There was no real evidence presented. Electricity, internet and telephone lines in Tigray were closed down. Roads to Tigray were blocked and a six month state of emergency was announced, with the region to be run by a federal government task force.

Two days later, on Friday, the Ethiopian Air Force bombed targets in Tigray. Clashes between troops took place in at least eight locations. Doctors Without Borders reported six dead and 60 wounded in one of them. In neighboring Amhara, hospitals reported more than one hundred wounded soldiers from the federal army. On Saturday, the regional government in Tigray was suspended by the parliament in Addis Ababa.

As in any war, the propaganda about successes which is now spread from both sides but can’t be trusted, particularly since Tigray is entirely closed off.

The conflict seems to have passed the point of no return. TPLF has been declared a terrorist organization by Addis Ababa. Abiy Ahmed says TPLF has prepared for war since 2018. Tigray officials in the federal capital have been arrested.

If the war goes full scale, two professional and mechanized armies will stand against each other. The federal army has long been dominated by Tigray officers and the army under TPLF control is estimated to have 250,000 troops, with much of the most modern equipment in the country. The federal forces have an upper hand with its air force, but it’s not the same on the ground.

The federal government has declared its aim to crush Tigray forces and conquer the region’s capital, Mekelle. TPLF, on the other hand, is preparing for a long guerilla-style war if the federal army enters its territory.

Already before the armed clashes, close to a third of the population in Tigray, two out of just over six million people, were dependent on food and aid deliveries. With roads closed in the recent week, fuel and bread shortages have already been reported.

The UN says an all-out war could force up to nine million people flee to their homes.

A mass revolt in 2016 signaled the beginning of a deep crisis in Ethiopia, or rather several simultaneous crises. Despite the spectacular economic growth, it is still among the poorest countries in the world, with GDP per capita at 10 percent of the global average. The rural population is 80% of a total population of 110 million, with most living off self sustained-small scale agriculture. In the cities, a monthly wage is between 50 and 200 euros a month. The economic growth has only befitted a small elite, alongside multinational companies and imperialist states. Famine exists alongside fruitful agricultural land grabbed by foreign companies and states.

From 1991, the Ethiopian People’s Revolutionary Democratic Front (EPRDF) ruled a de facto dictatorship, with the leader of the Tigray People’s Liberation Front (TPLF), Meles Zenawi, at its top as prime minister. After his death in 2012, his successor Hailemariam Desalegn met growing resistance culminating in mass revolts and strikes in 2016–2018. The response from the regime was repression. Already in the “elections” in 2015, the EPRDF claimed to have received 100% of the votes, both for the federal parliament and in the regions. In 2016, it used armed forces against demonstrations and at least 500 were killed.

Two periods of state of emergency, however, did not stop the revolts.

In a desperate move, Hailemariam Desalegn resigned in February 2018, and in April, Abiy Ahmed became the new Prime Minister. Being from Oromia, the most populated region and the youngest head of state in Africa, he became the new face of the old regime in which he had been a security officer.

Being from the inside of the regime, but different, Abiy Ahmed’s task was to stop the protests and save the government. Thousands of political prisoners were freed, previously banned parties became legal and a peace agreement was signed with Eritrea, 20 years after the war had ended. Abiy Ahmed went much further than the EPRDF/TPLF leaders had planned. He held mass rallies to get support and started a diplomatic offensive in the region. The Tigrayan leaders that had ruled since 1991 were ousted from politics and business, with Abiy Ahmed directing the anger of the masses at them.

This conflict reached a new level when Abiy Ahmed last year launched the Prosperity Party (PP) as his political vehicle. This self-proclaimed pan-Ethiopian party caused conflict with Oromi nationalist leaders that claimed Abiy Ahmed betrayed his Oromo origin. But even more so with the TPLF, who called the new party illegal and unconstitutional. The official line during the EPRDF rule was that its four parties represented the main ethnic groups — Oromia, Amhara, Tigray and the Southern Peoples of Ethiopia. In reality, however, it was a centralized dictatorial regime dominated by a Tigrayan elite based on its military role when the EPRDF took power and later in the war with Eritrea.

Following the condemnation of Abiy Ahmed’s new party, the TPLF made even harder criticism when elections were postponed in May and then again in August. The TPLF no longer recognizes the federal government. Officially, the term of the government expired in October, although it is clear that the elections in 2015 were completely rigged and fake.

The response from the TPLF was to organize local elections in September. These elections were declared illegitimate by Addis Ababa, which voted to withdraw finances for Tigray. At the same time, the federal government lost control over its Northern command, based in Tigray. A new general sent by the government was not allowed to enter the region.

Neither side has so far been open to negotiations. Abiy Ahmed mobilized troops and appointed a pro-war general as army chief. The TPLF is also mobilizing, and have some hope that Tigrayan officers and soldiers in the national army will be on their side. TPLF has high confidence in its military capacity and aims to overthrow the government.

The rapid escalation can further undermine Abiy Ahmed. There are already 1.8 million people internally displaced as a result of increased conflicts and violence, most often whipped up by regional leaders.

A member of Rättvisepartiet Socialisterna (ISA in Sweden), originally from Ethiopia, commented: “Too little attention is being given to the widespread ethnic-based killing, human rights atrocities and destruction of property being carried out over the last months against our fellow Ethiopians. It is affecting many of our people throughout Ethiopia, from Afar to Oromia, to Benishangul-Gumuz, to the Southern nations, the Amhara region, Harare, Dire Dawa and Gambella. No ethnic-based killing has been reported yet from either the Somali or Tigray regions. Yet, in other places, hundreds of people are dying violent deaths as many are targeted based on their ethnicity or religion.”

The regime of Abiy Ahmed, first seen as democratizing and allowing for different opinions, has gradually restored the methods of its predecessor, with mass arrests and accusations of terrorism.

Earlier this year, the killing of a popular Oromo singer, Hachalu Hundessa, who was critical of the government, caused violent clashes between Oromo activists and state forces. Followers of Jawar Mohammed, an Oromo leader previously allied with Abiy Ahmed but now under arrest, directed violent attacks against and killed people of other ethnic groups in Oromia and Addis Ababa.

The peace agreement in 2018 with Eritrea has not been followed by concrete demilitarization, but it formed a political alliance between Abiy Ahmed and Eritrea’s dictator, Isaias Afwerki. Some reports now say Eritrea is mobilizing on the border to Tigray. The TPLF is regarded as a main enemy by Eritrea’s ruler since the war in 1998–2000.

Imperialism will definitely strive to limit the conflict and if possible keep Abiy Ahmed in power. The horn of Africa, with Ethiopia in its midst, is a highly strategic geopolitical region. In nearby Djibouti, both the US and China have military bases. The closeness to war ridden Somalia, Sudan and Yemen underlines the importance. Ethiopia holds the headquarters of the African Union and is a close military ally to the United States. At the same time, the region is important for China’s Belt and road initiative as well as for the regional power struggle between Turkey and the UAE.

Ethiopia has a long history as a unified country, and there has been a strong feeling among Ethiopians against any break up. However, with today’s deep crisis there are commentators now starting to compare the situation with the breakup of Yugoslavia. The rhetoric of Abiy Ahmed to “save the country” sounds hollow to many Ethiopians that are no supporters of the Tigray military leaders.

The masses in all regions of Ethiopia need to struggle for both democratic rights and a life with jobs, food, infrastructures, health service. The present rulers, in Addis Ababa and the regions, together with capitalists and imperialism block the way to solve the crisis. Ethiopia needs democratic and revolutionary socialist mass organizations and a mass party for workers and the poor to end war, famine, diseases, corruption and exploitation.