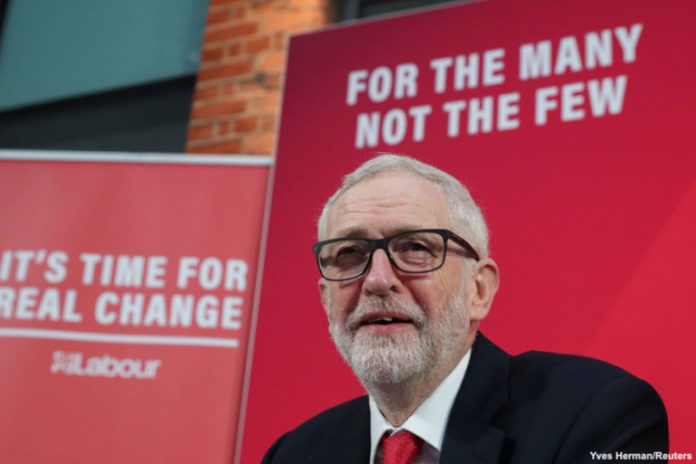 Jeremy Corbyn is not anti-Semitic. He has a lifelong history of fighting racism in all its forms. It is a disgrace that he has been suspended for saying that the report into antisemitism inside the Labour Party by the Equality and Human Rights Commission “overstated” the problem. In reality, this was a typically mild understatement from Corbyn!

This is not to dismiss the seriousness of anti-Semitism in society or the need to combat it wherever it arises, alongside Islamophobia, and all forms of racism. Socialist Alternative has written on this in detail previously, putting forward a working class, internationalist perspective for how antisemitism can be combated. The reality is that the investigation, the report, and Corbyn’s suspension have a lot less to do with antisemitism and a lot more to do with the Blairites’ determined campaign against Corbynism and the potential it represented for a very different type of Labour Party.

Starmer suspending Corbyn is the final maneuver in a five year war to resist the progress represented by Corbyn’s (twice) victory as Labour leader and success in the 2017 general election in particular. Corbyn as leader attracted hundreds of thousands of new members to Labour on the basis of his anti-austerity program. Thousands and thousands turned out to the mass rallies organized during the leadership campaigns; young people literally hung from window ledges to get a glimpse of the man putting forward ideas like free education and nationalization of the railways. And there have been few sights in the last decade more terrifying to the ruling class and their representatives in the PLP and Labour Party machine than that of trade unionists and young people side by side chanting “oh Jeremy Corbyn”. This movement threatened to undo the almost total victory by the capitalist class in securing the Labour Party – which was, after all, established by trade unions and socialists – for their own ends.

It is this fear that motivated the victory for Keir Starmer as Corbyn’s successor, a willing instrument to complete the process of putting down this anti-austerity surge. And his reign so far has been a downward spiral for Labour – from suspensions of Corbyn supporters at every opportunity, to talk of “national unity” with Johnson’s government in the face of their cataclysmic failure to deal with Covid-19 effectively. It is clear that Starmer is desperate to crush every remnant of Corbynism from Labour – in terms of politics and of people.

The rise and fall of Corbynism

But how has it been possible to go from what objectively was such a position of strength, to near-total defeat for the left in Labour? It is largely a consequence of serious failures by the leaders of the Corbyn surge from day one.

Firstly, Corbyn and the Socialist Campaign Group were completely unprepared for actually winning the leadership of the Labour Party. Very few people expected, at first, that they would be successful. It was partly the change in the leadership election rules which allowed non-members to vote but also, more importantly, the mass anger which existed in society which Corbyn was able to give expression to that propelled him into the leadership position. Despite the landslide victory and explosion in Labour Party membership – becoming the largest political party in Europe – this huge potential strength was never utilized by Corbyn and his supporters. It was clear that the Blairite wing, as political representatives of the capitalist class, were not going to tolerate any meaningful change in a leftward direction and needed to be organized against decisively.

The mistaken approach that the Blairites could be won over by “logical” or “moral” arguments directed the attention in the wrong place and led to multiple capitulations by Corbyn to the right. But no matter how many olive branches were put out to the right, none of them were taken – they were all snapped in half by the pro-capitalist MPs who didn’t want political unity on the basis of Corbyn’s anti-austerity policies. And, unfortunately, at no point did the leadership of Corbynism learn the lessons. In fact, they did the opposite and made even more retreats in the hope of appeasing the Blairites.

Two leadership elections, two general elections, multiple conferences and policy initiatives were all sabotaged by the right wing. It was even proven in a leaked report that Labour Party staffers were actively undermining Corbyn and left MPs during the 2017 general election. But still, Corbyn resigned as leader, accepting fault for the losses, and the left drew the conclusion that there is the need for a moderate leader to win against the Tories. We warned at the time of Starmer’s victory as leader that this was the start of the process of a shift back to the right – unless it was fought in a serious way. Rebecca Long-Bailey was sacked as shadow education secretary very quickly and since then multiple Corbyn-supporting MPs have been removed from positions.

And where has the resistance been? The biggest has been Unite cutting just 10% of its funding from the Labour Party, but unfortunately demanding nothing in return for the remaining 90%! None of this was inevitable. If the hundreds of thousands of Labour members who supported Corbyn had been mobilized, not just to knock on doors at election time, but in active campaigns to win the support for the already popular policies in the manifestos from, and then in turn to also mobilize the mass of the working class, this could have impacted on the general election results in 2017 and 2019, leading to a Corbyn victory. If the policy of mandatory re-selection had been implemented, which only amounts to democratic control by the members over who represents them publicly, the Blairite MPs could have been wiped out en-masse, with left-wing and Corbyn supporting candidates replacing them. If Corbyn had gone further than just supporting strikes on a personal level and mobilized the full force of the labour movement to give solidarity in a concrete way to workers in struggle, there could have been workers’ action in support of Corbyn’s policies which would have put huge pressure on not just the Blairites but the entire capitalist class.

Continued mistakes of the left

But far from drawing these conclusions, the Labour left leaders, even now, continue to make the same mistakes. The Socialist Campaign group of left Labour MPs have only said they “firmly oppose the decision to suspend Jeremy” and “will work tirelessly for his reinstatement.” Momentum said “this suspension risks politicizing Labour’s response to anti-Semitism.” Both Corbyn and John McDonnell appealed for Labour members to “remain calm”. Comments threads which have raged underneath these timid pronouncements on social media are dominated by working class Corbyn supporters urging these leading figures to abandon hope in changing the Labour Party. These responses are wholly insufficient and are actually  driving the resignation from Labour of  vast numbers of remaining Corbynistas, many of whom had already left Labour in the months following Starmer’s election as leader.

How will the suspension be resisted? Through the very same structures which initiated and carried out the witch hunt? Appealing on the basis of logic and reason and hoping the Blairites who control the levers of power inside Labour can be convinced of the “right thing to do”?

On the basis of experience over the last five years, it seems to be all but ruled out  that these left leaders will be willing and able to conduct the campaign of mass mobilization, determined struggle and decisive political action against the Blairites that would be necessary to stand any chance of winning.

We should be clear that there is zero chance of a “fair trial” for or a genuine independent investigation of Corbyn in the Labour Party. Even if Corbyn is reinstated, on what basis will it be? That he apologizes for “being an anti-Semite” or promises to never disagree with Starmer in the future? This is not the battle that should be fought.

Should the efforts of the left be in the Labour Party?

The forces that gave strength to the Corbyn movement at its height are largely no longer in, or at least active in, the Labour Party. The best of them have searched for other means to conduct the struggle against the Tories and the capitalist system – through organizing in their workplace, initiating university rent strikes, campaigning for free school meals, protesting for black lives, and many others. The efforts of the left, inside and outside Labour, are now best spent not on endless appeals and maneuvers inside the Labour Party machine but on mobilizing those workers and young people looking to fight back, and uniting these different movements. A national conference of resistance is urgently needed to bring together trade unionists, socialists and campaigners to discuss a way forward.

Corbyn and the other Labour left MPs should initiate such an event – if they did it would have the potential to involve huge numbers. But if they are unwilling, as seems likely, workers and young people can do it ourselves. Trade unions could also have an important role to play. They should immediately suspend their affiliation fees to Labour in response to Corbyn’s suspension from membership and while they embark on an urgent process of democratic consultation throughout their ranks on the way forward for working class political representation. Again – based on experience of their failure to push Corbyn to victory over the Blairites – it seems unlikely that to force such a step from the trade union leaderships would be possible without an almighty rank-and-file battle to either pressure or overturn them. But the anger existing among workers and throughout society at the moment makes this type of battle in the short term very possible.

These discussions will need to address the obvious question of how a new mass left party based on struggle could be formed. The struggles workers and young people are engaging in now and the even bigger ones to come need a political voice to take them forward. There is a crying need for a wing of these movements that can unite these struggles around a program for real change, can speak in town halls and parliament, and that can be a forum to debate what type of program can win a society to meet the needs of all those struggling for a better world.

The need for a Socialist Alternative

Socialist Alternative is saying all of this, not as bystanders to the events or with the benefit of hindsight, but repeating points that we have made consistently throughout Corbyn’s leadership. Many of our members joined the Labour Party and voted for Corbyn, either in internal elections or the general elections, and we actively joined campaigns with Labour Party members. However, at every stage we put forward what we thought would be necessary for a Corbyn victory and beyond.

But things have now qualitatively changed. When Rebecca Long-Bailey was sacked, we said “Those choosing to remain in the Labour party must now draw firm conclusions – the path of conciliation, retreats and silence in the name of “unity” can only lead to the “unity” of the graveyard.” This is even more true now.

Above all, what the last 5 years have shown, is that half-way measures will not succeed. The political, economic and social crises have only increased since Corbyn was first elected. The Covid-19 pandemic, and the government’s mishandling, has exposed the failures of capitalism and every day workers and young people are drawing conclusions that this system must be fundamentally changed. Socialist Alternative will actively and enthusiastically be part of genuine attempts to build a new mass left party of struggle – something which is urgently needed. We will argue for any new party to adopt a political approach based on mobilizing working class people and campaigning for a socialist alternative to capitalism. We appeal to all of those who want to be part of that, and part of a wider struggle for a socialist world, to join Socialist Alternative today.