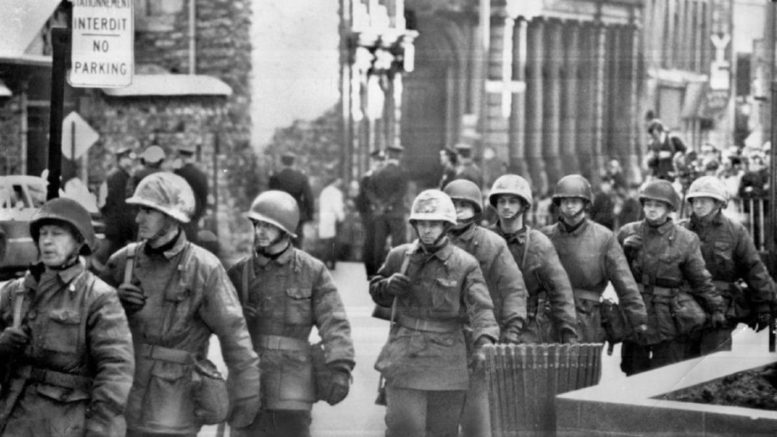 On October 16, 1970, Liberal PM Pierre Trudeau enacted the War Measures Act, its only usage in peacetime. Québec was flooded with 6,000 armed troops. The Act suspended democratic rights, allowed censorship, and authorized the police to search and arrest people without warrant.

The spur for this huge attack was the Quebec Liberation Front’s (FLQ) abduction of British diplomat James Cross on October 5. When the government refused to release jailed FLQ members and send the kidnappers overseas, the FLQ kidnapped Québec minister of Labour, Pierre Laporte on October 10.

The Act stated it could only “be in force during war, invasion, or insurrection.” The Québec and Canadian governments claimed they faced an insurrection.

FLQ, with about 30 members, was a left-wing nationalist terrorist organization, founded in 1963, which saw bombing symbols of federalism as a means of advancing Québec nationalism. The attacks left one person dead, 20 injured and most FLQ members in prison. Kidnapping was a new tactic. After the kidnappings, a few thousand gathered in support of FLQ slogans. Hardly an insurrection.

Over 3,000 homes and buildings were searched, and 497 people detained. Detainees were held for a week on average, often with no contact with the outside world, denied access to a lawyer or their family. Freedom of the press ceased during the crisis, with the RCMP intimidating editors, and interrogating and detaining prominent journalists. Some of the people detained were sympathizers of the FLQ, but many were union members, journalists, artists and writers. Only 18 were convicted of anything.

Outside of Québec, the RCMP raided left-wing activists’ homes and offices. Newspaper editors across Canada were warned not to publish the FLQ’s manifesto. BC passed an order to fire any educator advocating “the policies of the FLQ,” without specifying these policies.

Only the NDP voted against the Act, with Tommy Douglas correctly pointing out that the government “is using a sledgehammer to crack a peanut.” Every major English language newspaper in Canada supported it. Québec media was divided. Most French Canadians opposed the FLQ’s methods. Québec’s unions and the Parti Quebecois (PQ) called for the repeal of the Act.

Laporte was found murdered, his killers captured and jailed. Cross was released and his kidnappers flown to Cuba. The War Measures Act and the troops in Québec were in place until April 1971, months after any “emergency.”.

Trudeau, the “champion of civil liberties,” did the most in modern times to crush civil rights. The October crisis demonstrated the undemocratic core of Canada’s government. Why did Trudeau use a “sledgehammer?” Equally concerning as the FLQ was to the Québec and federal governments, were the much wider and more powerful changes of the Quiet Revolution – a nationalist and class movement that transformed Québec from the most right-wing, priest-ridden part of Canada to the most left-wing.

In the 1960s, there were rising anti-colonial, labour and social movements internationally, including in Québec. In the late 1960s, terrorism became popular among left and nationalist students and intellectuals. This was a disaster as it substituted small groups for mass democratic movements and inevitably led to both increased repression and popular hostility to the tactics, and often the ideology behind the tactics.

After nearly 20 years of the staunchly Catholic and right-wing Premier, Duplessis, the Liberals won the 1960 election and were pushed by many struggles to bring in changes. There was an explosion of unionization and some of North America’s most militant union battles. This “Quiet Revolution” separated Church and State, including ending religious education. School funding quintupled, Hydro-Quebec was nationalized, and universal healthcare and a provincial pension plan were implemented.

In 1970, the major trade union federations (FTQ, CSN, CEQ) created the Front d’action politique (FRAP) pointing to a mass workers’ party. Montreal’s authoritarian mayor Jean Drapeau used the October crisis to smear FRAP as associated with the FLQ, which weakened FRAP and helped boost the PQ, a non-working-class party, to dominate sovereigntist politics. In 1972 the unions formed a Common Front with a 200,000 strong strike. Workers won a significant hike in the minimum wage, paid maternity leave and universal daycare.

It was the workers’ mass movements that made change in Québec, not a small group of terrorists. The working class isn’t done putting its stamp on Québec history.