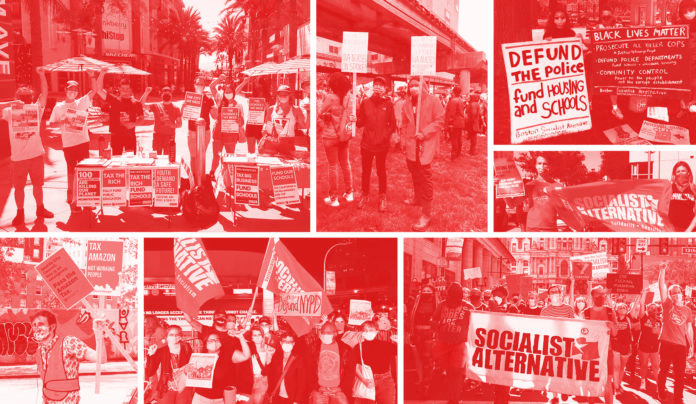 2020 has been a nightmare of a year. The year kicked off on an apocalyptic note with the Australian wildfires and the threat of war with Iran, but it quickly became clear that the worst was yet to come. One day, life seemed fairly normal and the next, millions of us went into lockdown as the COVID-19 pandemic spread across the world. In the following weeks and months, millions of us would lose our jobs, our savings, and many thousands of our loved ones. Over the summer, the West Coast erupted into flames as climate change-driven wildfires spread uncontrollably. Now, we are looking toward a presidential election where the increasingly authoritarian Donald Trump is squaring off against an incompetent, bumbling representative of the Democratic Party elite, Joe Biden, with Trump openly threatening to steal the election. More than ever before, capitalism has exposed itself as a social system that is truly rotten to the core, with a political system that is utterly bankrupt.

But 2020 is not just a year of disaster. It is also a year of incredible fightback. As Wall Street investment bankers and billionaires like Amazon CEO Jeff Bezos rake in massive profits and brazenly display their disregard for workers’ lives, we’ve seen grocery store workers, teachers, nurses, postal workers, warehouse workers, and many more taking action to fight back. Tens of millions took to the streets to demand Justice for George Floyd in some of the largest protests in U.S. history. A key task for socialists is to help unite these struggles and point the way forward out of the horrors of capitalism. Before and during the pandemic, Socialist Alternative has been a force behind incredible struggles and major victories for the working class.

Socialist Alternative: A Revolutionary Organization That Gets Things Done

In Seattle, where Socialist Alternative member Kshama Sawant sits on the City Council, we have provided a powerful example of what’s possible with an elected Marxist who uses her seat to build movements that can fight for every possible gain for working people. Unlike most politicians — even those who claim to be “progressive” — Kshama Sawant recognizes that consistently standing with working people means consistently standing up to big business and the establishment. In just one year, we’ve gone toe-to-toe with Jeff Bezos and won — twice. In the first instance, we re-elected Kshama despite Amazon dumping a record-breaking $1.5 million into the election. Immediately after that, Kshama and Socialist Alternative played a leading role in the recent Tax Amazon victory, winning a tax on Seattle’s biggest corporations to fund affordable housing, and demonstrating in action that it’s possible to win offensive struggles against austerity. This summer, in solidarity with the Black Lives Matter movement, Kshama’s office introduced and won a bill to ban chemical crowd control weapons and chokeholds from police, the first of its kind in the country. The far right and the billionaire class are so outraged at the effectiveness of our socialist seat that they are launching a recall campaign in an attempt to drive Kshama out of office (see page 15).

Through our work in Seattle and elsewhere, we always put front and center our demand for a new political party for working people in the U.S. We do not see the Democratic Party as reformable, and we use our electoral work as well as our positions in social movements and the labor movement to advance the project of the formation of a new party. A party of the working class, with a fighting program and genuinely democratic structures, would be a major step forward in channeling our struggles into lasting change.

In Minneapolis, a member of Socialist Alternative serves as the elected president of Amalgamated Transit Union Local 1005. During the Justice for George Floyd uprising, our members in the union led bus drivers in refusing to transport protestors to jail. This inspired transit workers across the country to follow suit, including in New York City, providing a concrete example of the indispensable role of working-class solidarity in Black Lives Matter and other movements.

In Somerville, MA, Socialist Alternative members played a leading role in the struggle to win a huge living wage victory, with a 25% raise for paraprofessionals in the Somerville Public Schools.

Our members are leading and participating in tenants’ struggles across the country. In New York, our members serve as leaders in their tenants unions fighting unjust evictions (see page 12).

Socialist Alternative has also made important steps forward in building the forces of Marxism across the country, including building inroads in the South. While we’re steadily growing, we are still a small organization – how have we been so effective, despite our comparatively small numbers?

Punching Above Our Weight

The reason why Socialist Alternative has been able to consistently “punch above our weight” is because of our political cohesion. We are an organization based around the understanding that capitalism is a fundamentally broken and backwards system that will never meet the needs of working people.

Socialist Alternative members are leaders in their workplaces and in their communities. We fight for all the advances we can win under capitalism, but we also believe that a fundamental socialist transformation is necessary to end oppression and injustice. We seek to build a bridge from struggles for immediate reforms to an understanding of the need for socialism. Capitalism relies on racism, sexism, homophobia, transphobia, and other forms of oppression to divide an exploit. A key task for socialists is to unite the multiracial, multigender working class, which we see as the key force capable of changing the world.

Key to our effectiveness is our organization as a democratic centralist party. This essentially means that within our organization, we have democratic discussions and debate our program and priorities as much as possible, but once we make decisions, we are united in action to carry them out. We seek to draw out and apply the lessons of history in order to unite struggles of the oppressed, and strengthen the power of the working class. If you are serious about changing the world, 2020 may be the year for you to join Socialist Alternative.