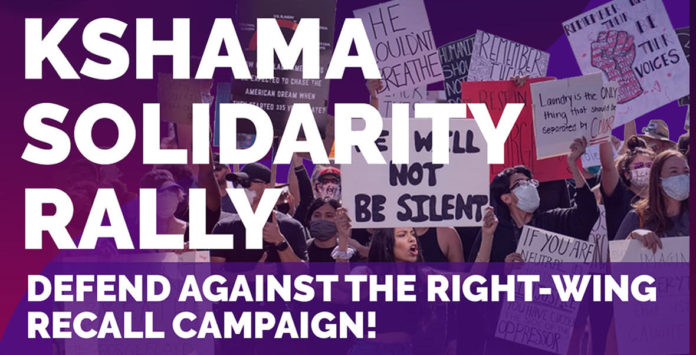 I want to thank everyone in the movement, everyone who is fighting for social, economic, and racial justice. I also wanted to thank our attorney Dmitri Iglitzin and his colleagues for the brilliant work today, representing our socialist Council office and our movement.

While working people should be angry at this outcome, we should not be surprised. The laws and courts and police under capitalism do not serve working people, people of color, those already marginalized under capitalism – they are made to hold us down. They are made to hold up the status quo of deep inequality, of violence, of racism, sexism, of ruthless exploitation of the whole working class and the environment.

For nearly a century, slavery was legal in the US. For nearly a century after that, Jim Crow segregation was legal. It was a system of unbelievably brutal institutionalized racism that was enforced by every institution of American capitalism. By the laws, the courts, the police. Lynchings and murders without convictions.

Jim Crow was defeated by the civil rights movement but racist violence continues. Today we have police murders – Seattle has police murders – of black and brown people, without convictions.

We know what the American ruling class is capable of doing to defend its system and its profits.

We should in no way be surprised that with the awakening of another generation fighting against racism. That they face an epidemic of police violence against them.

Or that this violence is being defended by both major political parties. It’s not just the racist in the White House, but Democratic mayors and city councils around the country who have backed up the vicious crackdowns. We need a new party for the working class and the oppressed in this country.

We should not be surprised that the courts would side with the racist police and system, rather than with this awakening movement. The ruling class is on the defensive. But they are empowering reaction. We saw how not only Trump, but a section of the mass media defended the murders in Kenosha. We see in Seattle how a section of the Democratic establishment, led up by Mayor Durkan, has gone to war against Black Lives Matter. And has joined this to the effort to try to drive out our socialist City Council office.

They are afraid – the ruling class and the right wing are afraid of us. Of the movement against racism, of the workers movement, of the socialist movement. They are afraid that regular people are fighting back on a scale and with a passion that these rotten corporate politicians have not seen in a long time.

They are afraid, precisely because they have seen what we can win, of the movements to come. Everyone knows what is coming down the pike.

Nearly half of those polled in July in both Washington and the greater Seattle area said they’d lost employment income during the pandemic,

An estimated 27 percent of adults in the United States missed their rent or mortgage payment for July, according to a nationwide survey conducted by the U.S. Census Bureau. And 42 percent of Black renters in Washington state, and 24 percent of Hispanic or Latino renters, said they could not pay June rent.

Big business and their representatives know that working-class confidence is built on past successes, and that after winning the Amazon Tax, there will be a fighting movement to cancel rent, mortgage, and utility payments for all of 2020.

We will appeal this court ruling.

We will continue the fight in court against this attempt by the right wing and big business to have a do-over of our victory last year in the re-election.

And we will also take the fight on the street. We will launch a massive grassroots campaign against the right wing recall effort.

Make no mistake: our opponents don’t just want a do-over of the election. They would like a do-over of the historic Amazon Tax, of our landmark renters rights victories, of the $15 minimum wage – of every victory working people have won in Seattle over these last six years.

They are already attempting a do-over of our landmark ban against chemical and other so-called “non-lethal” weapons. This recall campaign is an attack on all our historic victories and an attempt to block future ones.

Just as the repeal of the 2018 big business tax was part of a broader right-wing, anti-homeless, big business offensive, this recall is part of an overall right wing reaction against black lives matter, and against social movements generally.

This recall attempt is also a huge attack against the proven principled leadership of our socialist City Council office, an elected office that has never bowed to the pressure from either big business and the billionaires or the pressure that comes from politics as usual, the pressure to get along with others at the top which implies selling out the working-class people and oppressed people our office stands with.

It is important that the City Council yesterday voted 7-1 in favor of supporting funding for our legal defense against the recall effort.

At the same time, those who get elected wanting to use their position to fight alongside the working class face the relentless pressure of respectability politics or civility politics.

So we need to keep building the pressure. And we need to begin to prepare the ground for our grassroots campaign

Our movements need unity against the right wing and big business, and we need it now.

Dr. Martin Luthre King Jr said, “I must confess that over the last few years I have been gravely disappointed with the white moderate. I have almost reached the regrettable conclusion that the Negro’s great stumbling block in the stride toward freedom is not the White Citizen’s Council-er or the Ku Klux Klanner, but the white moderate who is more devoted to “order” than to justice; who prefers a negative peace which is the absence of tension to a positive peace which is the presence of justice; who constantly says “I agree with you in the goal you seek, but I can’t agree with your methods of direct action.”

He was right – one of our great stumbling blocks is liberal leaders siding with the reaction, rather than with working people and the oppressed. This has been our experience every single day since we first won office – liberal politicians telling us to not upset the negative peace, and to not create tension.

Liberal leaders at that time told MLK and other great radical leaders of the era that they should “go slow.” They were told to stay in their lane, with MLK being famously attacked by mainstream civil rights organizations, including sadly leaders in the NAACP and Urban League, for his statements against the Vietnam war and in favor of a broad multiractial working-class movement.

I say this not to equate our fight in Seattle, or myself, with those struggles or leaders of that era. I say it because we need to be prepared for this as well.

The world is catching on fire – in more than one sense.

In this era of capitalist crisis, of economic crisis, health crisis, climate catastrophe, and now raging wildfires along the West Coast, we must completely reject the idea of the moderate liberals that we should “go slow,” that we can return to the imagined, nostalgic “stability” of some bygone era of capitalism.

NO – we need radical change. We need socialist change. And we need it now.

We knocked on over 200,000 doors last year to defeat the richest man in the world. We will do the same and more in this fight.

Because our socialist City Council office isn’t, and never has been, about me personally. It is a seat for working people, it is a support and a launchpad for working class movements. And we will defend it.

In the coming weeks, the next stage of the People’s Budget fight, the Defund SPD struggle, and the movement against racist policing will begin.

And there is an urgent need for renters and all working people to get seriously organized to fight to cancel rent, mortgage, utility payments for all of 2020!

We will go on the offensive.

The recent weeks have shown we cannot wait for billionaires – the fossil fuel overlords, the big bankers – and their political representatives to save the planet. We will need to build independent movements – led in part by workers and their unions in the fossil fuel sector itself. At the end of the day, if workers don’t fight to take the fossil fuel corporations into democratic public ownership, there is no hope for an end to the misery faced by billions or to have a safe and habitable planet.

And yes, there will be obstacles. We are going to have to rise above the obstacles. I hope you will join us. Solidarity.”