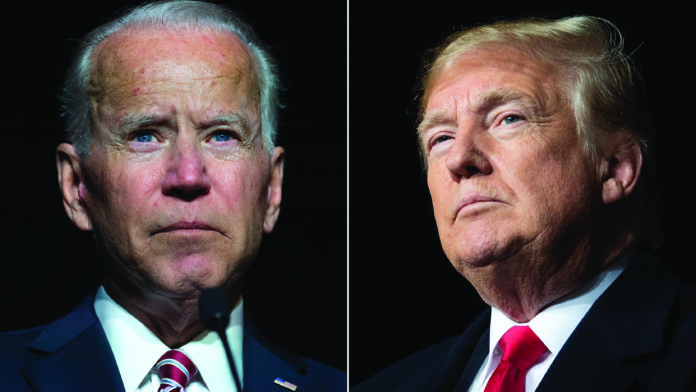 2020 isn’t over yet, and it could get even more turbulent. The deeply rooted injustices of capitalism are coming to the fore across the world. Climate change and budget cuts are leading to unprecedented wildfires and hurricanes. The pandemic’s effects are made worse by Trump’s incompetence and a for-profit health system. Mass protests against racism are now being met with right-wing vigilante violence, in collaboration with militarized police. No matter the outcome of this election, these problems can become worse if we don’t build a mass movement to fundamentally change society.

Given the deep hatred of Trump by tens of millions, this election is the Democrats’ to lose, but Biden’s lead has narrowed in many polls since July. Just like Hillary Clinton in 2016, the corporate-controlled Democratic establishment is running a complacent campaign. Biden’s staff aren’t knocking on doors, hitting the phones, or registering young people to vote, even in battleground states like Michigan. Meanwhile, the Trump campaign is knocking on one million doors a week. Biden and Harris fail to put forward any program that inspires working people, the millions of unemployed, or the youth. Massive voter turnout will be necessary to defeat Trump.

Trump is whipping up “law and order” sentiment in recent ads, claiming that the thoroughly pro-corporate Democratic leadership is somehow “radical left.” Making matters worse, Trump has encouraged right-wing violence and given a “nod” to the deeply misguided “QAnon” conspiracy theories. On top of this, Trump is able to pose to the “left” of Democrats through executive orders for increased unemployment benefits and a moratorium on evictions. There are new Republican ads pointing out that hated pharmaceutical companies prefer Biden and the Democrats to Trump (which is true), and a recent Trump speech criticized the Iraq war and anti-worker aspects of free trade agreements. This political posturing is combined with attempts at voter suppression that go beyond even the “normal” Republican maneuvers.

There is a distinct threat that Trump will try to undemocratically steal this election. If this threat materializes, then socialists should be at the forefront of building a determined mass struggle to ensure every vote is counted, linking this demand to the fight against racism, economic inequality, and environmental destruction.

Socialists have been at the forefront of the fight against Trump’s right-wing, racist, anti-working class agenda since the moment Hillary Clinton’s failed campaign conceded the election in 2016. The Democratic Party leadership, on the other hand, has offered meager “resistance,” failing to mobilize the anger of millions into a movement for popular policies like single-payer health care, a Green New Deal, or any substantive change to racist policing. Instead Democratic Party leaders have spent the last four years talking about “Russiagate,” an issue that failed to inspire people to take action.

Now, in this election facing a weakened yet dangerous Trump, the best that the Democratic Party can offer is an embarrassment of a candidate who is often kept in hiding while the world burns. Many people see this as “incompetence,” but that doesn’t tell the whole story. The corporate-controlled Democratic establishment was extremely well-organized earlier this year to defeat the Bernie Sanders campaign. In fact, the Democratic Party leadership is quite competent at what they see as their main job: to help maximize the profits of big business and billionaires. Doing what is “best for business” means holding back movements of workers and the oppressed when they  challenge capitalism’s exploitation and oppression. For instance, despite the fact that “Medicare for All” is growing in popularity, Biden and Harris oppose it vehemently, because they’re bankrolled by insurance and pharmaceutical corporations.

As this article was being edited, we received news about the death of Ruth Bader Ginsburg. While millionaire Congressmen went on vacation rather than providing necessary stimulus for working people this summer, we’ll now see emergency sessions for the Republicans to try to push through a right-wing judge. Democrats could try to block this by refusing to show up to hearings and calling for mass protests across the country. They likely won’t do this. Instead, they’ll play politics with people’s lives, using this to increase “lesser evil” pressure to vote for Biden who’s pushed for conservatives to sit on the Supreme Court in the past. While fighting against a right-wing takeover of the courts, we should also recognize the inherently undemocratic nature of lifetime-appointed positions being so crucial in U.S. politics.

Would Biden “Bring Back Normal?”

When the clock strikes midnight to usher in the New Year, everyone will be glad to see the end of 2020, but the pandemic, economic crisis, racism, environmental catastrophe, and a growing right-wing threat will still be with us going into 2021. If Biden wins the election, it won’t be because of any enthusiasm for him, but rather due to the deep hatred of Trump.  Millions of people would be jubilant about both the end of the Trump regime, and the beginning of the New Year, and socialists will participate in the celebrations with our eyes wide open about the dangers that lie ahead.

If Biden enters the White House, the Democrats will be overseeing the biggest crisis this country’s seen since the Great Depression. Anti-establishment moods will grow and political polarization will continue. Far right groups and outright fascist forces will increase in support, because the Democrats and the capitalist system they serve won’t deliver substantial change. We should remember that the failures of corporate establishment politics led to Trump coming to the White House in the first place, and a right-wing figure or organization even worse than Trump could emerge under a Biden Presidency in crisis.

In order to effectively fight against the far right, we need a movement and ultimately a new party that fights in the interests of the working class. This is one reason why Socialist Alternative rejects the logic of “lesser evil” voting. In this election, a protest vote for Howie Hawkins can help build steps toward a working-class party, despite the weaknesses of the Green Party. More importantly, building the labor movement, struggles against racism, a fight against looming evictions, protests against climate change, and an outright rebellion against all the injustices of capitalism can lay the basis for the type of party we need.

While there will be a huge sigh of relief if Biden wins the election and a potential decrease in protests for a few months, nobody has faith that Biden will solve all our problems. Movements would emerge again and increasingly come into conflict with the Democratic Party. Socialists can play a huge role in these struggles, pushing for people to get organized, putting forward clear demands, popularizing the need for a new party, and pushing for fundamental change.

The “normal” of rampant inequality and destruction of the planet would still be devastating, and we’ll never return to “pre-2020” conditions. But coming to grips with these conclusions doesn’t need to lead toward despair. Instead, we need a sense of urgency about building the socialist movement, laying the groundwork for a new working-class party, and building the struggles of oppressed and young people to fight for a better world. There is a burning need to get organized. And if you feel that need, you should join Socialist Alternative, as part of a worldwide movement to end the capitalist system that produces monsters like Trump and the horrific events of 2020.