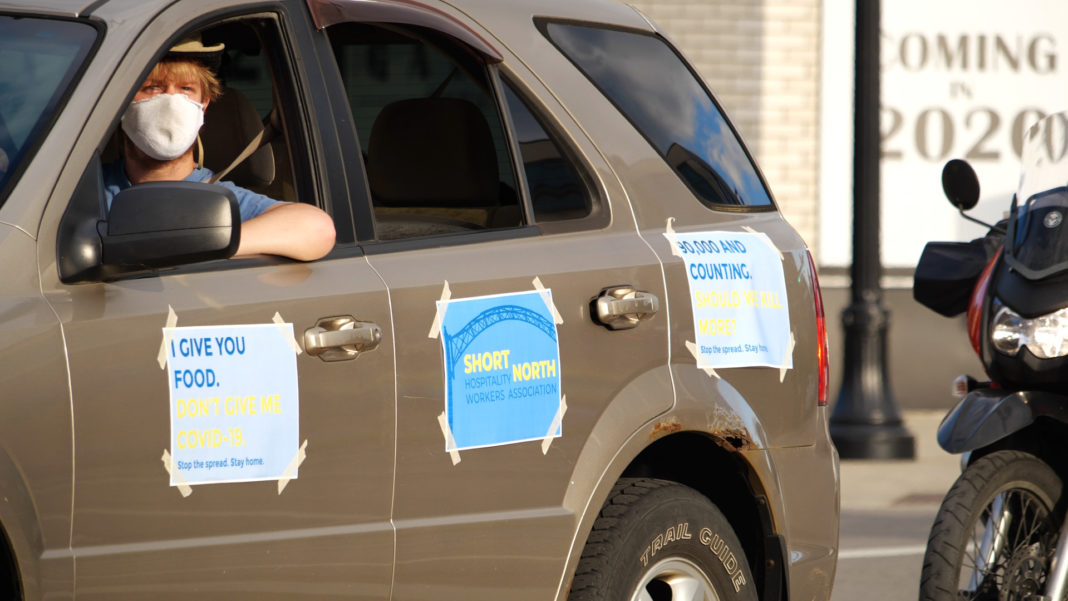 But now DeWine is moving too quickly to dial back these precautions. Hospitality workers — whose working conditions make them especially vulnerable to coronavirus — are fighting back against the premature opening of Ohio’s economy.

To safeguard the public from coronavirus, DeWineʼs original plan was to wait for a downward trend in COVID-19 cases before lifting shelter-in-place orders. But under pressure from right-wing protesters and state legislators in his own Republican Party, DeWine has shifted the standard for public safety. He is reopening the economy after a three-week plateau during which COVID cases have not significantly increased or declined.

On May 12, DeWine permitted non-essential retail businesses to open. Hair salons opened on May 15. Bars and restaurants opened patios on May 15 and fully reopened on May 21. Polling indicates that most Ohioans oppose reopening these sections of the economy.

The nature of the hospitality industry makes workers especially vulnerable to coronavirus. Many bars and restaurants don’t have enough space to allow for social distancing. Bartenders and wait staff often have to deal with customers who are intoxicated or belligerent — situations that can be impossible to manage while maintaining social distance.

Jackie, who worked three different hospitality jobs in Columbus before the pandemic, would not feel safe returning to work if she was called in. “Even if customers are wearing masks, they have to take them off to drink and eat,” she said. “Weʼre also touching each and every glass and plate.”

As the economy reopened, the Ohio Department of Job and Family Services asked employers to report employees who refused to return to work due to safety concerns on a “COVID-19 Employee Fraud” web form. The onus would be on workers — many of whom donʼt have access to direct evidence or legal advice — to prove that their employers are not following safety protocols. Workers who are reported could lose state unemployment benefits and $600 a week in Pandemic Unemployment Assistance provided by federal stimulus legislation.

“Itʼs totally unfair to make workers choose their well being over a paycheck,” Jackie said. “The motivations behind opening up are economically driven exclusively.” Hospitality workers in Columbus refer to the form as the “snitch site.”

Socialist Alternative member Adam Haskins is a bartender in the Short North Arts District in Columbus. When he saw the snitch site, he viewed the situation through the lens of working-class politics. “I saw it as a tool that the ruling class was using to coerce workers back into unsafe work conditions, without any protection or control over whatʼs going to happen to them. It motivated me to create an organized resistance.”

Haskins and other hospitality workers used social media to share the snitch form with coworkers, who were ready to move into struggle and quickly formed the Short North Hospitality Worker Association, which currently has 75 members.

On May 15, the workers organized a car and bicycle rally in the Short North to protest the opening of restaurant and bar patios. To discourage customers from patronizing the businesses, they drove and biked very slowly through the Short North to disrupt traffic flow.

The reopening of the patios was a disaster. Most customers ignored social distancing protocols  and hardly any wore masks. The crowd outside the Standard Hall bar prompted multiple calls to Columbus police and the health department to report social distancing violations.

On May 21, when restaurants and bars fully reopened, the workers organized a call-in campaign, followed by another, larger car and bike protest on May 22. Cars and bikers drove up and down the Short North, with chants like “No Safety, No Work,” and “It’s not safe to go outside, workers don’t deserve to die!” while other protestors hung up flyers and talked with workers.

Reopening Ohio’s economy must be connected to a serious plan for mass testing, contact tracing, and worker safety. Workers in every sector should have a say in whether their workplaces can reopen.

The motivation for reopening the economy prematurely across the U.S. is partly political. The anti-quarantine protests in April were driven by a network of right-wing individuals and groups who donʼt want a continuation of the economic downturn to jeopardize President Trumpʼs reelection.

But the primary motivation is economic. The billionaires, corporate executives, and politicians  who constitute the U.S. ruling class know that pumping trillions of stimulus dollars into the economy — some of which has been used to replace the paychecks of workers in shuttered service sector businesses during the pandemic —  is not a long-term solution. Big business wants to get back to making money.

The economy is already in a record slump and the corporate class desperately wants to return the economy to normal and to send Americans back to work prematurely. However, there is no going back to “normal.” To oppose the looting of social services we need to reverse the 2017 tax cuts and actually raise corporate taxes, especially for companies such as Amazon who have profited from the pandemic.  There should be no cuts to education, social security, or any public services, and the unemployment top-up should continue. We need a Green New Deal to provide living-wage jobs to all workers.

Hospitality workers fighting to keep their workplaces closed should link up with essential and frontline workers at grocery and retail stores, distribution centers, and hospitals and fight for a socialist response to the pandemic.

COVID-19 cases markedly increased as of May 21, when Governor DeWine predicted that 90% of Ohio’s economy would be reopened. On May 23 coronavirus deaths in Ohio more than doubled from the day before. The American ruling class doesn՚t want to pay for a crisis that they created. They are content to let working people pay for it with their lives.